Endangered Birds Depend on Heavy Industry for Survival 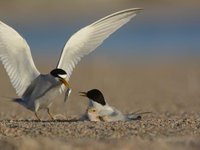 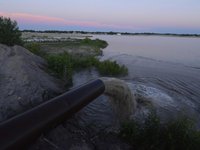 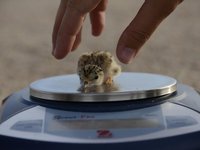 Managing lands for endangered species can lead to conflicts between environmentalists, businesses and landowners. But for the last 15 years, people from different camps have been quietly working together to help save two bird species in Nebraska.

On a warm, sandy beach near Ashland, Nebraska, biology intern Lindsay Brown picks up a small mottled egg and holds it to her ear, listening for telltale scratching. Hearing nothing, she places it back into its nest—a small hollowed patch of sand. It’s a hot July afternoon, near the end of the nesting season, and she’s checking least tern and piping plover nests for late bloomers.

Suddenly, she and her supervisor Lauren Dinan spot a chick skittering along the shoreline 50 yards away. Dinan sends Brown running down the beach after it.

“We’re trying to catch this chick to determine if it was banded already,” Dinan explained, jogging lightly after her. If not, they’ll band it today. “But sometimes they’re pretty good at hiding,” she laughed. 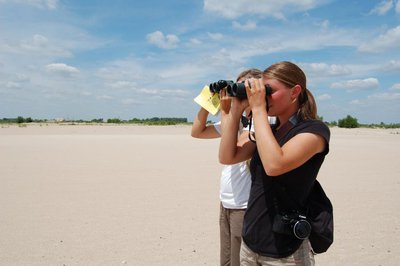 Young and vibrant, Dinan wears khakis, tennis shoes and ponytail, and a hefty pair of binoculars around her neck. She’s a non-game bird biologist with the Nebraska Game and Parks Commission, and she and Brown are monitoring bird populations for the Tern and Plover Conservation Partnership, based at the University of Nebraska-Lincoln. During the handful of months of summer nesting season, they try to determine whether nests are failing or succeeding, and band chicks for recapture and observation in subsequent years.

Today both migratory birds nest all across the state: on the Niobrara River, at Lake McConaughy, on the Central and Lower Platte River and the Missouri River. But despite their endurance, 20th century human settlement resulted in much lower river flows and less midstream river habitat, threatening their survival (now compounded by climate change). Interior least terns and piping plovers were put on the federal endangered species list in 1986 (interior least terns are listed as endangered; piping plovers as threatened). 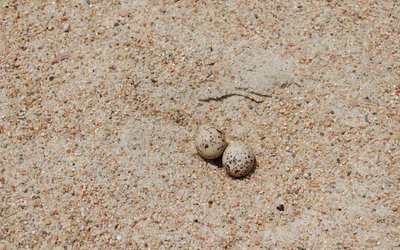 But now, some of the same human activities that threatened birds are helping them.

Just a stone’s throw from where Dinan and Brown monitor nests, bulldozers move sand at a new housing development adjacent to Western Sand and Gravel. After the sand and gravel mine finishes with a piece of land, it’s often developed into lakeshore housing. This stretch of the Lower Platte River, between Columbus and Plattsmouth, has a high concentration of gravel mines and housing developments, adjacent to or very near the river. It’s also where most of these birds in the state nest.

“When I started in 2005 there was still a lot of animosity about protecting these birds, and the guys were a little hesitant about looking out for [them],” Western’s General Manager Dave Brakenhoff said.

“The majority of them were nesting on private property: either nesting on industrial property, sand and gravel mines or dredging operations of some sort, or they’re nesting at housing developments, in people’s backyards,” Bomberger Brown said.

For the last 15 years, Bomberger Brown and others from Nebraska Game and Parks and UNL have been working through the partnership with mines and other landowners along this stretch of the Platte River. Brakenhoff said the biologists have provided training and education for his team and shared their research findings, such as the southern winter migrations of some of the birds that spend their summer in Nebraska. 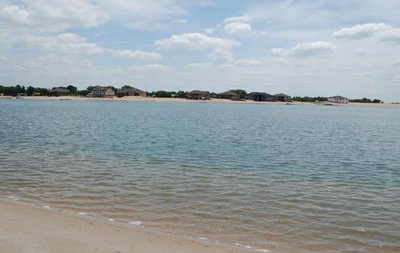 Lakeshore housing is often developed on the land formerly used by sand and gravel operations, like this one adjacent to Western Sand and Gravel's property near Ashland. (Photo by Ariana Brocious, Platte Basin Timelapse)

“When you see year to year how the birds have grown… how they track them, where they go to, it makes it all interesting and worthwhile with your efforts to help preserve the environment for these birds. It’s really amazing,” Brakenhoff said. Now, his workers are careful about protecting the birds, he said, with minimal impact on their operations.

“We try to provide other places for them to nest so it keeps them away from our working area and we don’t have to worry about stepping on them or driving over the nest,” Brakenhoff said.

In his heavy work boots and electric-yellow vest, Western’s Superintendent Keith Carroll may not look like a typical birder. But he said working with the partnership has changed the way he and his fellow mine workers feel about the birds.

“You got all these little birds running around…go out and find a nest with the babies just born and the guys will look at that and they all think it’s pretty cool too. The whole company, all the guys that work here. It’s part of our job but it’s something that you enjoy,” Carroll said.

He even prepares the nesting site for the birds each season, clearing the beaches of vegetation to improve their habitat. 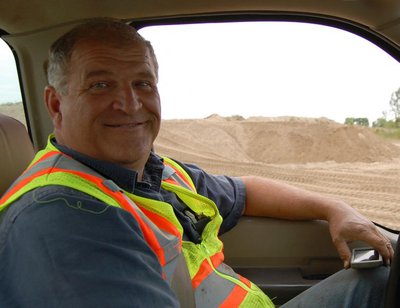 Providing distinct places for the birds also helps companies stay clear of any federal endangered species prosecution, and can even help speed up state and federal permits. It works, Bomberger Brown said, because the birds are adapted to nest in river sandbars—subject to winter ice jams and spring floods—that frequently change. Just like land at sand and gravel mines.

“They’re sort of predisposed to look around, if they don’t find a sandbar here that’s appropriate for nesting, to look elsewhere. And that’s what gives them the flexibility to move to a sand and gravel mine to nest. Which probably is a positive thing for their eventual survival,” Bomberger Brown said.

Adult terns squawk in the air above Western Sand and Gravel’s beach as Dinan closes in on the chick. “Don’t be surprised if they poop on you, cause that’s what they do,” Dinan said, laughing.

“Do you see that little fluff ball there?” she asked, pointing near the shore. “That’s what we’re looking for.” Dinan estimates the little bird to be about five days old, and since he’s already banded, she and Brown record the band number and the chick’s weight before leaving him alone “so he can get back to being a bird,” Dinan said.

Each summer biologists track the bird’s nesting colonies to monitor reproduction, population growth and critical nesting habitat. Dinan has done this work for five field seasons already, and has a personal connection to it because her uncle, John Dinan, started the Tern and Plover Conservation Partnership in 1999.

“They’ve been working with and living with people for as long as people have been here on the landscape with them,” Bomberger Brown said. “And if they’re willing to come to us to meet their needs, it seems only fair we find a way to accommodate them and help them.”

The Platte Basin Timelapse project is seeing a watershed in motion, and telling the stories of our water. Learn more at www.plattebasintimelapse.com.