Elk Creek Niobium mine could be operational by late 2016

NioCorp, a Canadian company, is looking to mine a rare niobium deposit in Nebraska. The company hopes its mine near Elk Creek, Nebraska could be operational by late 2016.

In a farmer’s field in Johnson County, about an hour and a half southeast of Lincoln, Canadian-based mining company NioCorp is looking for niobium, a mineral added to steel to make it lighter and stronger.

Scott Honan, NioCorp’s VP of Business Development, said there is billions of dollars worth of material starting at about 600 feet below the surface. 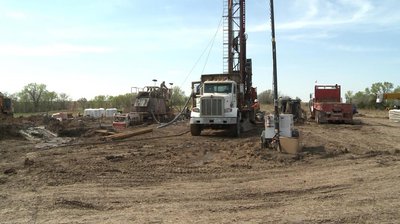 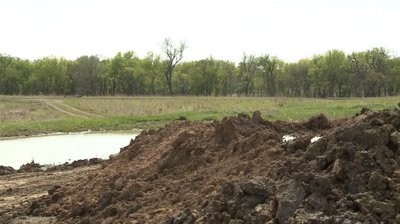 ABOVE: Drill crews employed by NioCorp have drilled 21 holes in the last two years. According to Scott Honan with NioCorp, hole depth ranged from 2,400 feet to 3,000. In total, NioCorp has drilled 17,914 meters in the past year, or 11.13 miles. (Photo by Ryan Robertson, NET News)

BELOW: While the area around a drill site looks worn down, Honan said NioCorp employs various efforts to restore the area to its natural setting. The green space in this picture is a former drill site, adjacent to the current site. (Photo by Ryan Robertson, NET News)

At the drill site, a small team of workers operated two very large pieces of machinery. They have been drilling holes about the diameter of a small cantaloupe thousands of feet into the ground. Honan said even though NioCorp released a very positive preliminary economic assessment earlier this year, the company continues to work to figure out the best way to free the niobium from its current location.

Honan said that information also helps him lock down leases with landowners.

“It’s kind of a typical process as you develop a mine where you start with a very large land position, and as you figure out exactly where things are and the resources and where you want your facilities to be, that land package kind of shrinks down a little bit,” Honan said. “So we’re going through that right now and I would expect something like one-third of the original 64 agreements would be extended or renewed in some way."

Did you catch that? Of the 64 lease agreements NioCorp initially held with landowners in 2011, somewhere around 20 will be extended. The terms of each agreement are private.

“When you have to have those conversations with people they would obviously like to have their agreements extended and get some more benefit directly from the project. So I’ve had a number of those conversations with folks,” Honan said. “I think if you’re honest and upfront with them, and explain what you’re doing and why you’re doing it and the fact that the project is still moving forward and moving forward quickly, the people are usually pretty accepting of the fact they may not get extended.”

Honan said he now has a preliminary design of the mine and the surface facilities needed to run it. Things like a crushing plant and mill. 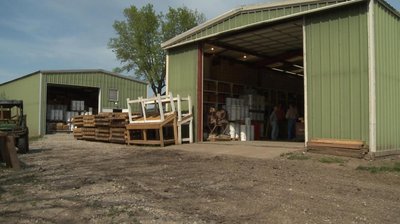 These barns were built by Molycorp in the late 1960's. Molycorp is the privately held mining company which held the original land lease agreements around Elk Creek. Inside each barn are thousands of pounds of mineral samples, harvested from the drilling operations around the area. (Photo by Ryan Robertson, NET News)

“Along with those buildings, we would have all the other kinds of things that you would expect from an industrial operation. We would have an office, a warehouse, storage areas, parking lot, maintenance facilities, all the kinds of smaller buildings and structures that you would need to support a larger operation like we’re talking about here,” Honan said.

Once the mine is up and running, which could be as soon as late 2016, NioCorp plans to employ between 200-300 people. Quite the economic boom considering the nearest town, Elk Creek, had fewer than 100 people living there in 2010.

Last year, former state senator Tony Fulton, who now sits on NioCorp’s board of directors, said the roads and rail lines are already in place to begin mining. The land where the mine will most likely be located though, hasn’t been re-zoned yet for a mining operation. 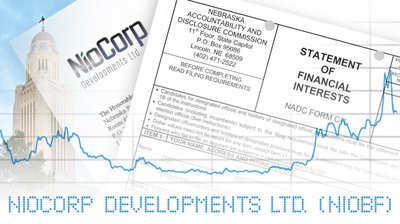 More NET News reporting on the niobium mine near Elk Creek, Nebraska:

Niobium and the Nebraska Legislature: Disclosure and Potential Conflict of Interests

While they declined to speak on the record, several landowners did express some concern at the possibility of so many people moving in and not having the adequate resources to deal with them.

Lavon Heidemann, another former state senator and former lt. governor, doesn’t think it will be a problem. He owns the land across the road from where most of the niobium in the area has been located, and does have a lease agreement with NioCorp.

He said as a property owner, he isn’t concerned about a lack of grocery stores, gas stations, and housing in the area. 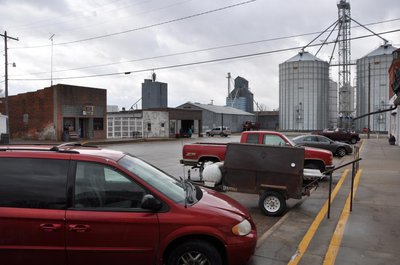 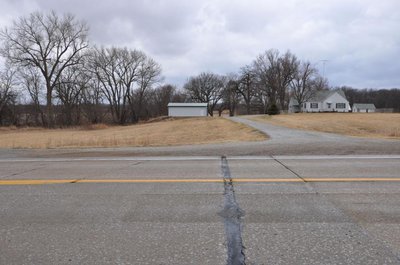 ABOVE: Downtown Elk Creek consists of a handful of buildings, and the grain silos near the railroad tracks. The 2010 census listed the population of the town at 98. NioCorp said it plans to higher between 200 and 300 people once the mine is operational.

BELOW: The bulk of the niobium deposit is located beneath a farm just off Highway 50. Tony Fulton, a former state senator and now a member of NioCorp's board of directors, said the proximity of the site to a highway and rail line will make transport of mined materials easier. (Photos by Ryan Robertson, NET News)

“Build it and they will come. Pure and simple,” Heidemann said. “This is an opportunity for the local community to actually grow, and we don’t even know to what extent yet. There might be spin-off projects because of this.”

Scott Honan said he began talking to economic development groups last year about building more homes and shops in the area, but says most investors are waiting for more certainty from NioCorp before building; the type of certainty that comes with the release of a feasibility study.

According to Honan, all of the work NioCorp has done over the last two years has been for the feasibility study, which should be available by the end of the year. It’s expected to cost $919 million to build the mine and all the necessary facilities. A NioCorp press release said that figure includes a substantial amount of money to cover contingencies and owner’s costs.

Honan admitted, though, without the help of local landowners, the project would be dead in the water.

“We want to be good neighbors,” Honan said, “Certainly as a company, if we don’t have license to operate from the local folks, we probably aren’t going to be operating.”

And it appears the local folks are continuing to give NioCorp license to operate. Honan said he’s reached agreements with about half of the 20 or so leases NioCorp wanted to renew. He said not a single landowner has told him “no” so far, but there are those doing their due diligence before signing a new agreement.