Eleven state senators are asking for the Nebraska Legislature to call itself into special session to deal with racial justice issues.

The Legislature adjourned Aug. 13, and is not scheduled to meet again until January. But the senators asking for a special session say senators didn’t do enough. Among them is Sen. Megan Hunt.

“In our recent session the Legislature failed to address the real immediate problems that many Nebraskans face in housing, unemployment, dangerous workplace conditions and systemic racism. That is why we need to go into special session now,” Hunt said.

The senators are proposing a number of issues to be tackled in a special session, including police use of force, racial discrimination, civilian police oversight, workplace protections from COVID-19, and evictions.

“All they have to do, and they know it, is to wait until the weather changes. When the cold weather comes, there will be no demonstrations. There will be nothing, and nothing will change. There has to be an emphasis on all of the people demonstrating to register and then vote,” Chambers said.

And Chambers added a warning about what could happen if political action fails.

“There is only so much pressure that can be built up inside a closed container before the whole thing explodes,” he said.

The power for the Legislature to call itself into special session exists in law, but Clerk of the Legislature Patrick O’Donnell said it has never been used successfully. The eleven senators have taken the first step. Now, the Secretary of State will send letters to all 49 senators. If 33 of them say they want a special session, it will be called. 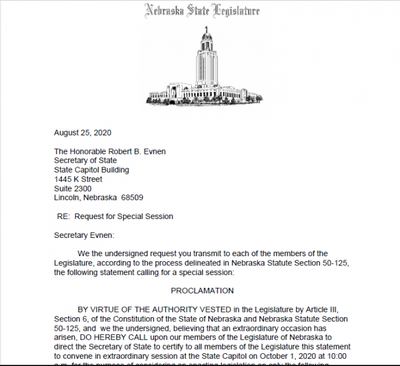 Gov. Pete Ricketts could also call a special session, but spokesman Taylor Gage said he will not. Attempts to reach Sen. Jim Scheer, speaker of the Legislature, for his reaction were not immediately successful.

The 11 senators seeking a special session include 9 of the officially nonpartisan Legislature’s 17 registered Democrats, one independent, and one Republican. That leaves them looking for 22 more senators to support the call among the remaining 30 registered Republicans and 8 Democrats.

Sen. Machaela Cavanaugh, one of those seeking a special session, said it’s worth the effort.

“You are guaranteed a hundred percent failure if you never try. And this is too important of an issue at too important of a time not to at least make the effort and to let the people in our communities know that there are representatives that care,” Cavanaugh said.

Secretary of State Robert Evnen said the deadline for senators to respond whether or not they want a special session is next Friday, Sept. 4.