In the Sandhills of Nebraska, you can gaze over miles of grass-covered dunes without seeing signs of human civilization, save the occasional fence line. But this picture may soon change, with the addition of high-power transmission lines and wind turbines. And that prospect has led to a Sandhills power struggle, between those who say wind power will boost the economy, and those who say it will ruin a great, unspoiled place.

Frank Utter guides his Gator up a sandy track from his house near Brewster, Nebraska to where the Nebraska Public Power District wants to run a high power transmission line across the ranch he runs. It’s about a 15-minute ride – plenty of time for a city kid to come up with dumb question, like “What kind of grass is this?”

Concern for those grasses, and the fragile ecosystem they’re part of, is a big reason for opposition to transmission lines and wind turbines in the Sandhills.

The Nebraska Public Power District wants to build a 225 mile-long, 345kv line – the so-called “R-Project” -- from its coal-fired Gerald Gentleman power plant near Sutherland, north to Thedford, then east to the existing Western transmission line near Clearwater. 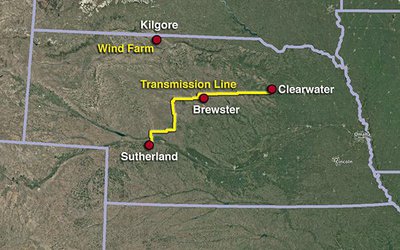 At a recent public hearing in Doniphan, Thedford rancher Lemoyne Dailey cautioned NPPD board members about bringing in heavy equipment to build the line across the fragile terrain.

“I want you guys to think about wagon trains that came across there a hundred-plus years ago. There’s still ruts left by those wagon trains. Can you imagine what’s going to happen with the machinery that you guys will bring through there?” Dailey asked. “With one kick of your boot you can remove the topsoil. It is that thin. And if the wind picks it up from there you suddenly have a blowout that may never heal.”

Blowouts are areas without grass where sand is exposed to the wind, running the risk of spreading and reducing the land’s value for grazing cattle.

“We are looking at ways to construct the line in the areas where there isn’t good access without using the heavy equipment. We’re going to use different types of towers,” Kent said.

“In areas in the east-west section where we don’t have good access we’ll use lattice tower construction. The primary reason for doing that is the lattice towers can be constructed lighter, and so you can bring them in and place them with helicopters,” Kent added. 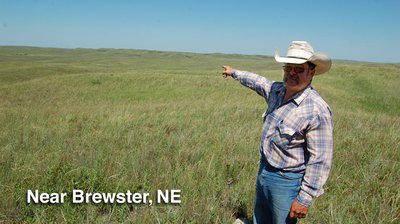 Frank Utter points to where a transmission line would cross land he manages near Brewster, NE (Photo by Fred Knapp, NET News). 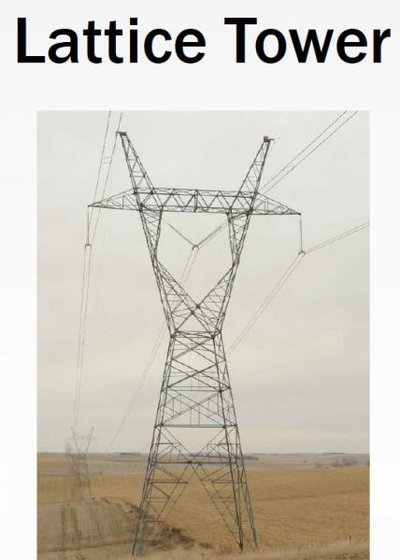 NPPD says it will use lattice towers where land can't be reached by road (Photo courtesy NPPD). 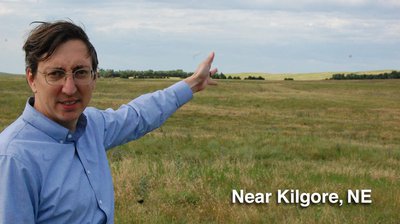 Kent says NPPD has started getting easements from property owners to cross their land. He says the utility has not yet started eminent domain proceedings against anyone. But the prospect of that happening is adding to the controversy among landowners opposed to the line.

About 65 miles north of the proposed transmission line, a 30-turbine wind farm proposed near Kilgore also faces headwinds from opponents.

At a recent meeting of the Cherry County Planning Commission, Brent Steffen, who runs a cow-calf operation, painted a grim picture of what could be the future.

“When I picture in my mind’s eye the Sandhills turned into a surreal, alien, twilight zone landscape, blighted by hundreds and even thousands of giant wind turbines, and hundreds of miles of high voltage transmission lines with giant towers that look like mechanical robots, and miles and miles of service roads between these structures, I get an ache deep in my heart and deep in my soul,” Steffen said.

Supporters of the proposed wind farm say it will diversify the economy and generate income for landowners, tax revenues for schools, and funds for other community projects. Peggy Marsh, who ranches near Mullen, supports the proposal. Marsh belongs to one of 70 families who have banded together to form Cherry County Wind LLC, a corporation that wants to build the wind farm.

Marsh said she was surprised by opponents of the project.

“If we’d have had people blocking progressive ideas all the way back to history, where would we have been when they wanted to put up the telephone, the telegraph, the REA, the railroads coming in? And what about these pivots?” Marsh asked. “I mean, I guess I didn’t know it was such a big deal.”

But it seems like a big deal, at least for now. Last week, the Cherry County Planning Commission voted unanimously, with one abstention, to recommend against a zoning permit for the wind farm. A final decision is up to the county commissioners.

Meanwhile, NPPD is continuing to pursue building its “R-project” transmission line through the Sandhills. Technically, the two proposals are not connected. The Kilgore wind farm, 65 miles north of Thedford, wouldn’t need the R-project transmission line to connect the wind energy it generates to the nation’s electrical grid.

But the aesthetic objections are similar. Eric Shipwright, who lives near Brewster, describes how the 360-degree view of hay meadows from his house could change if the transmission line goes through.

NPPD’s Tom Kent tried to link this change with other historical developments.

For previous coverage of the R-Project, click here. For a story on wind power following the last legislative session, click here.

The impact of the latest proposals on the Sandhills will be determined over the next several months. The Cherry County board is expected to decide on the Kilgore wind farm. And NPPD hopes to begin building the R-Project transmission line early next year, despite the threat of a lawsuit.