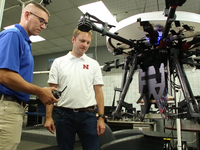 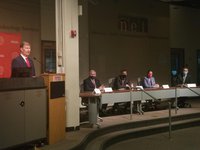 A University of Nebraska research center has been awarded an additional $92 million contract from the Department of Defense.

The National Strategic Research Institute, or NSRI, is one of 14 University Affiliated Research Centers, not-for-profit entities funded primarily by the U.S. Government. The NSRI was founded in 2012 with an initial $84 million contract, then received another $92 million in 2018.

University of Nebraska President Ted Carter says nearly $300 million in research contracts and grants have been awarded over the past eight years.

"We’ve got physicists who are helping build lasers capable of detecting hidden nuclear materials, UNL chemists are working to develop drugs to protect military personnel from the effects of radiation exposure," Carter said. "We’ve got UNMC experts that are developing a method to deliver oxygen to soldiers who have suffered traumatic lung injuries.”

The University system has announced up to $50 million in budget cuts across the four campuses over the next three years. Carter says the NSRI grant does not require the university to provide any additional funding.

"Our research dollars coming in to support everything from early childhood development to technical agriculture and innovation, to cyber security, to again, this DOD work, has been on the positive and is still increasing," Carter said.

NSRI research director for chemical and biological programs Josh Santarpia says one major area of research has been global public health security, starting with the Ebola outbreak of 2014 and continuing with COVID-19.

"When we had our first real, serious pandemic in the last hundred years, we were able to actually be ready to respond to that. We were able to help air force develop movement plans, and validate systems for moving infected people," Santarpia said. "But we also had the ability to help characterize the virus itself and how it transmits from person to person."

Carter says the institute and its research projects support the Nebraska economy and workforce development.