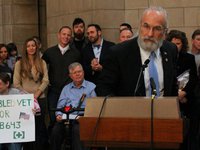 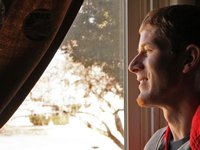 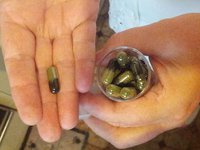 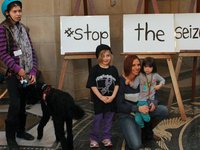 Personal stories of Nebraskans who have quietly been using medical marijuana to treat a variety of conditions apparently are having an impact on state senators deciding how to vote on small wave of bills introduced this session.

Opponents of any form of legalization fear emotional anecdotes from medical users may overshadow the long-term risks of marijuana.

To date, supporters of medical marijuana have dominated press coverage of the issue.

At news conferences, lobbying visits to senators’ offices, and unplanned encounters with legislators in their home districts, a variety of Nebraskans have admitted, sometimes for the first time publicly, they or a family member have illegally obtained marijuana to deal with a medical condition when prescription drugs have failed them. 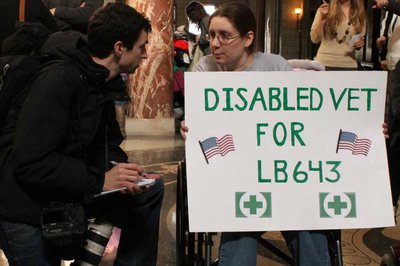 An LB 643 supporter talks to a reporter. (Photo by Bill Kelly, NET News)

“Our goal is to show people the personal stories of how cannabis can help people,” Katie Philippi of Lincoln said. She became an advocate after her terminally-ill brother-in-law used marijuana to control his pain. She says there is a new found willingness to talk openly about the unauthorized use of medical marijuana.

“They’re out there but this is a sub-culture that’s been taught to stay quiet,” Philippi said. “It’s time to voice our opinions and it’s time to face that fear.”

In some cases chance meetings with constituents shifted a state senator’s opinion.

Senator Mike Groene, the conservative freshman lawmaker from North Platte, made clear in the early days of last year’s campaign he opposed relaxing any of the state’s marijuana laws.

“Marijuana is a drug,” Groene said recently. “People I know have abused it. It affects them.”

He reevaluated his position after lunch and a little campaigning at the Airport Inn in North Platte.

Jeremy Crary was the host on duty that day. When taking Groene to his table the candidate couldn’t help but notice Crary’s arm curled up to his side and how the young man walked with a noticeable limp.

Crary remembers the candidate asking him for his vote as he was being seated.

“Then I asked him his stance on medical marijuana and he said he was against it,” Crary recalls. “And then he asked me my stance and I told him I couldn’t be working without it.”

Groene said later he was surprised by Crary’s bluntly acknowledging he ingests marijuana before work to quell the pain and muscle spasms left over from a near-death experience with a pistol eight years earlier.

“The young man was clean cut; works hard,” Groene said. “That’s one of the instances of people I have met that I know they’re not pulling my leg. They actually use it for a pain purpose.” 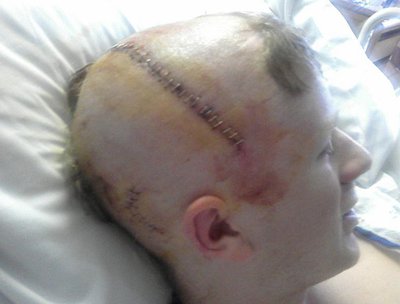 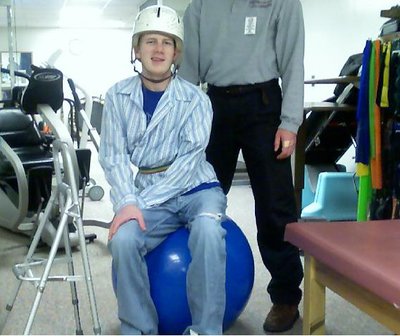 Jeremy Crary during his recovery from a gunshot wound. (Photos courtesy Jeremy Crary)

The story of Crary’s injury and recovery are certainly memorable enough.

He says when he was 18 he was “screwing around with a gun and had it go off.”

The bullet tore through the boy’s skull right by the temple on the right side.

“I lost half my brain,” he says now with calmness others use to describe a sprained ankle. “I couldn’t use my left arm, my left leg. I lost my left peripheral in both eyes. I was blind in my right eye from blood running down my nerve into it.”

Photos taken at the time show a baseball-size dent in his head. Since then surgeons rebuilt his skull with titanium plates making it difficult to detect any damage at all. A web of scars above his ear become visible only when he takes off his cap and brushes back his hair.

Crary will always have to cope with his limp, the twisted arm and painful muscle spasms constantly remind him of the neurological damage left behind.

Not long after he got out of the hospital Crary began supplementing his prescription painkillers with marijuana. He had been a recreational user before the incident. He found certain types of cannabis did a better job of controlling the muscle spasms.

“I slowly weaned myself off of a couple other medications, like my Metoprolol and stuff that has a bunch of bad side effects,” Crary said. He is no longer using any prescription medications and has the support of his doctor.

“He’s cool with all that,” Crary said.

Hearing the details of Crary’s claim that marijuana helped his particular case made an impression on Senator Groene. He remains adamantly opposed to recreational use, however he is likely to support one of two bills legalizing a form of medical marijuana.

“You’ve got to separate the medical purpose and the harm of it as a recreational drug,” Groene said. “That’s what I’m trying to do as I look at these bills.” 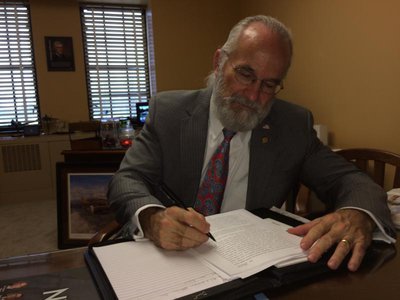 Two bills with different approaches to the medical use of cannabis are before the Nebraska Legislature this session.

The broader of the two, introduced by Sen. Tommy Garrett of Bellevue, treats medically-prescribed cannabis like any other prescription drug. LB 643 would allow state licensed, nonprofit distributors to grow and sell marijuana. Customers would be required to obtain special ID cards from their physician with the authorization of the Nebraska Department of Health and Human Services. Qualifying patients could legally keep up to 12 plants and 6 ounces of cannabis.

The second bill, LB 390, would allow research at the University of Nebraska Medical Center into the effectiveness of a specific hemp oil believed to control some types of brain seizures. The sponsor, Senator Sue Crawford of Bellevue, last session withdrew a version of the bill that sought to fully legalize the hemp oil and revised it to concentrate on state-supported research.

Garrett’s bill has attracted the support of medicinal cannabis advocates who believe the Crawford bill does not go far enough nor move fast enough towards making the product available to those currently in need.

Among those who spoke at a recent rally in the Capitol rotunda was Philippi’s sister, Josie Kranz. Her husband Christopher struggled for two years with the side effects of his treatments for brain cancer. He did not use marijuana at the time but since his death Kranz and Philippi became convinced medical marijuana would have reduced his suffering.

"Going through all this is terrible enough,” Kranz told the rally in January. “We shouldn’t have to risk becoming a criminal to medically treat our loved ones who are suffering.”

Personal experience led Sen. Garrett to introduce the bill. In the 1970s his father-in-law’s doctor suggested he use marijuana to calm the effects of the chemotherapy used to treat his pancreatic cancer.

“It helped his quality of life in the short time he lasted,” Garrett said.

At the Capitol rally after introducing the bill, Garrett said it was “unconscionable that it has taken this long to have the medical benefits of medical marijuana to be recognized.”

Nebraska Attorney General Doug Peterson has launched a counterattack on the bill. In a statement issued the same day as Garrett’s rally, Peterson said “If there is medical evidence to support the use of cannabis for treatment purposes then the appropriate method is to seek FDA approval” instead of a change in state law.

Calling Colorado’s method of legalizing medical and recreational marijuana “uncharted territory” he said “the result has been that marijuana has become readily available to those who do not have legitimate medical need” creating “a very serious problem with abuse of cannabis, particularly among young people.”

Susie Dugan, the Nebraska delegate for Drug Watch International, stood on the sidelines during the pro-cannabis rally at the Capitol, handing out material listing her organizations concerns about the bill. She acknowledged the personal testimonials are tough to counter.

“I want those people to have relief, and I truly sympathize, but don’t buy the lie,” Dugan said in an interview after the event. She compares lobbying in favor of medical marijuana to the tobacco industry pitching the health benefits of cigarettes 50 years ago.

“It’s not giving us the truth that is really sad” Dugan said. “It’s not about kids or illness; it’s about their profits.”

While garnering a huge amount of press attention and discussion, supporters of the bill know the personal stories may not be enough to win the votes of a veto-proof majority of the Legislature.

“If we can’t get it passed this session, at least we’ve started the dialogue,” Sen. Garrett said.

Six Young Nebraskans Talk About Voting for the First Time
As Nebraska death penalty case advances, pace of appeals may increase
DACA's Uncertain Future and the Story of One Nebraska DACA Recipient