Trade disputes threaten to slash U-S food exports by billions of dollars. President Trump has promised to protect farmers from the fallout. That would likely involve an infusion of taxpayer money and the agency that gave the world government cheese.

The corn and soybeans growing in Glenn Brunkow’s fields in the rolling Flint Hills north of Wamego, Kansas, got some much needed rain recently and look healthy.

Brunkow has reason to expect a good harvest, but the way things are looking globally, he’ll lose money on the crop. Trade disputes with China, Mexico and Canada threaten to slash U.S. food exports by billions. About half the soybean crop goes overseas, most of that to China — and since mid-April, soybean prices have plunged about 20 percent and corn about 15 percent.

“Prices are really bad,” Brunkow said, squinting in the sun. “We’re looking at some of the lowest prices we’ve had in quite a while, a decade or more.”

President Donald Trump enjoyed broad support from farmers, and he has promised to protect them from trade war fallout, though how the administration would do that isn’t exactly clear. There’s a possibility, however, that a Depression-era federal program could become a focal point.

‘This could be catastrophic’

Free trade is a fragile, but lucrative system for farmers. Case in point: Brunkow said that if China puts new tariffs on soybeans and other row crops, some farms will fail.

“This could be catastrophic,” Brunkow predicted. “We see a lot of producers not make it through past this fall.” 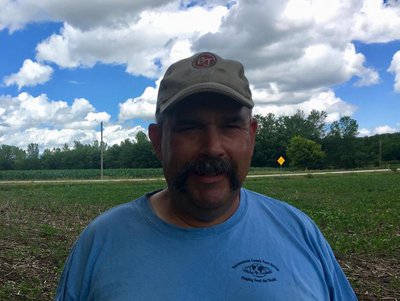 Kansas farmer Glenn Brunkow has reason to expect a good corn and soybean crop this year, but he's concerned about an intensifying trade war. (Photo by Frank Morris for Harvest Public Media)

The federal government shores up farmers in lots of ways, as taxpayers subsidize crop insurance and other programs designed to compensate for natural disasters or falling prices. But the farm safety net won’t protect farmers from a trade war, Iowa State agricultural economist Chad Hart said.

He thinks the Trump administration will dust off an old model for boosting prices, one that generated headlines —and punchlines —in the 1970s.

“The government cheese program,” Hart said, explaining further, “Dairy prices were very low. The government was trying to support dairy farmers. The way they did that by purchasing milk. They did it through this Commodity Credit Corporation. “

The Commodity Credit Corporation Charter Act came out of the Depression, and since 1939 has given the U.S. Department of Agriculture authority to borrow money from the U.S. Treasury to buy commodities or otherwise help farmers cope with low prices.

It’s never gone away, but Hart thinks the Trump administration is about to ramp it up.

“This is a relatively old program that If sits in the shadows until it’s needed, for something like this,” he said, adding that the CCC can issue bonds to borrow up to about $30 billion.

It’s not clear whether the USDA would use it to buy up farm commodities or find a way to pay farmers directly, according to Joe Glauber, a senior research fellow with the International Food Policy Research Institute. Either way, he said, taxpayers would be on the hook.

“As a consumer, I’m going to have to pay higher prices as a result of this, and higher taxes, because of a bail out through the CCC Charter Act,” said Glauber, who was also chief economist at the USDA under President Barack Obama.

Trade disputes are already costing America’s hog farmers hundreds of millions of dollars in sales, but commercial crop farmers aren’t really feeling it yet because they’re not selling their grain yet.

If trade barriers persist through harvest and then into next year, Glauber said the pain will be very real.

“I think U.S. agriculture has a much, much bigger problem, if you lose a big share of these markets, just because of a trade war that spirals out of control for a while,” he said.

Frank Morris is an NPR correspondent and senior editor at KCUR 89.3. You can reach him on Twitter @FrankNewsman