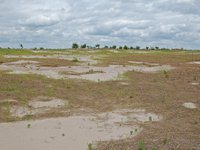 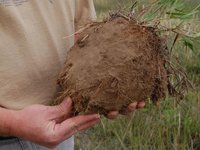 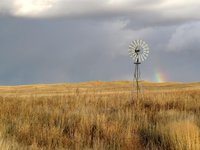 The Plains have experienced prolonged, and in some places severe, drought during the last several years. But could drought ever make Nebraska’s Sandhills resemble the Sahara? Yes—and it has, several times before.

The Sandhills are a lush and complex grassland ecosystem sitting atop the massive Ogallala aquifer, supporting many cattle ranches and species of wildlife. So it’s quite a contrast to visit the research sites of David Wedin, an ecology professor at the University of Nebraska-Lincoln. On a warm summer day, Wedin lead the way to one circular plot he’s put through what he calls the “death and destruction” treatment, killed once every three years.

“We actually herbicide it with Roundup, glyphosate,” Wedin said. “So we’re simulating a severe disturbance of some kind.”

Wedin’s Grassland Destabilization Experiment has been going on for about a decade on university property in north-central Nebraska. Several test plots hold only patchy vegetation and lots of bare sand. In addition to herbicides, he’s used an agricultural disk to scrape off the grass in some places.

“We’re trying to understand what happens when the system goes past its point of resilience and loses its stability, and kinda how the Sandhills falls apart,” Wedin said. “What happens ecologically in that process.” 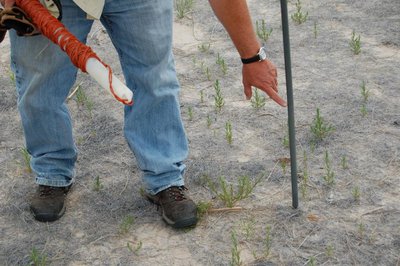 Dave Wedin shows how much sand has been lost on one of his test plots recently.

Though surprised by the resilience of the grasslands, after the fourth and fifth winters, some of the patches did start to move, "and then it just went exponential on us. We went from an inch or two and before you knew it we were losing four to five inches on average, per month," Wedin said. (Photo by Ariana Brocious, NET News/Platte Basin Timelapse)

During the last 10,000 years, data point to four periods of “mega-drought”— one lasting nearly 3,000 years. That drought, possibly exacerbated by strong winds, wiped out vegetation across the Sandhills. Wedin said during the most recent mega-drought 800 years ago, “you would have been standing at this point and looking at the largest set of moving sand dunes in the western hemisphere.”

UNL scientists have spent the last 15 years dating the Sandhills through a process called optically-stimulated luminescence, which measures the energy held in sand grains. UNL Professor Paul Hanson, a geologist with the Nebraska Geological Survey, uses this technique to study how and when the sand dunes last moved.

Hanson and his colleagues drill down 60-80 feet to take core samples of the dunes, then return to their lab to study them.

On the UNL campus, Hanson leads the way through a rotating door of darkness to enter the lab lit by red and amber lights. Inside, Hanson and his students remove the outer edges of the core sample to work with the unexposed sand grains in the middle. After sieving the sand down to the right grain size, they treat it in several different acids to concentrate the quartz. Then they load the individual grains of sand onto disks into a machine that reads the luminescence—like what you see from fireflies.

“So if your eyes were more sensitive and could actually see smaller quantities of light, you could actually see the sand grains give off the light under the right conditions,” Hanson said. But since our eyes aren’t that sensitive, this machine runs 24/7, dating sand one individual grain at a time. By averaging the useful data from enough grains of sand, “you can use that as a clock to tell how long the grains have been buried,” said Hanson, and thus the last time the dune was bare and moving.

The geologic history Paul Hanson constructs provides context for the ecological research Dave Wedin is doing—trying to understand what conditions are necessary to make a healthy grassland destabilize and fall apart, and how long it takes to recover. Wedin said he’s been quite surprised by the plots killed every three years, particularly given the extreme drought in 2012. 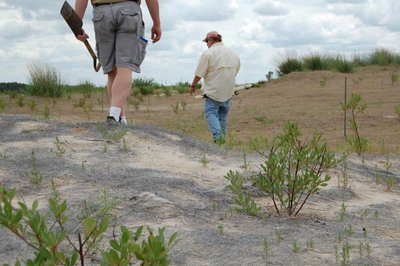 Paul Hanson and David Wedin walk through a test plot being revegetated.

"Our goal was to get the vegetation reestablished in a couple years to study how an ecosystem with woody vegetation worked with an ecosystem with grasses. And the brutal lesson was: we weren’t going to restore this vegetation in a couple years," Wedin said. After four years of that effort, he's finally started to see the new plants take root, with the help of erosion mats and shredded hay. (Photos by Ariana Brocious, NET News/Platte Basin Timelapse) 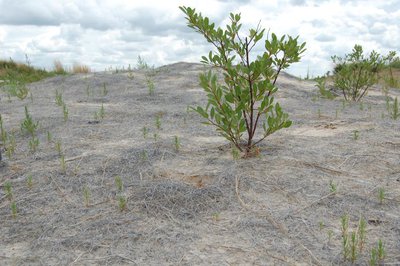 “I never would have thought you could completely kill the vegetation out here and it could go another four years before you started to see erosion. And by saying there wasn’t significant erosion I mean less than an inch,” Wedin said.

Even with surface vegetation killed, the stressed grasslands proved far more resilient than Wedin imagined, retaining their root systems, sand and organic matter for years. He’s now trying to revegetate the plots, which he said has been even harder:

“It’s a situation where the professors come out and learn something that everybody that lives out here already knew: that it’s easier to destroy the stability out here in the Sandhills than it is to restore it once it’s lost,” Wedin said. “And that was humbling.”

Ultimately, Wedin and Hanson agree droughts capable of making the Sandhills resemble the Sahara are very long—probably on the order of decades or a couple hundred years. They’d have to be far more severe than what we’ve seen in the last two hundred years—but not in the last millennium.

“If we know that in the last 1,000 years this landscape produced droughts that destabilized the whole landscape, it seems prudent to think that can do that again. And that discussion is without human-caused climate change. But we don’t even need to invoke human-caused climate change to say, it’s a reasonable prediction sometime in the next couple hundred years we’re going to see droughts out here that the whole thing falls apart,” Wedin said.

And long before things reach that point, he pointed out a few hard years with no grass could be devastating for the Sandhills ranching economy.