Crop dusting pilots are the adrenaline junkies of the farm world. They whizz through the air and fly under power lines to apply seeds and pesticides to farmers’ fields. It’s a high-tech industry now, but it’s still a dangerous job.

Mike Lee steers his plane over the Missouri-Arkansas state line, checking out a checkerboard of green and brown fields of rice, cotton, corn and soybeans. Lee is the owner of Earl’s Flying Service, a crop dusting business in Steele, Mo., and he’s scouting some farm fields that his pilots will treat later in the day.

Lee and other aerial applicators, as crop dusting pilots are known, have to keep their eyes peeled for potential obstacles like trees or towers that could pose a threat to his two pilots. Despite advances in airplane technology and safety training, crop dusting remains a dangerous line of work.

Crop dusting pilots are the ultimate multi-taskers. They fly the plane while dodging trees, homes, power lines and on-lookers. They don’t want to pour pesticides onto a farmhouse or sprinkle the wrong seeds on a neighbor’s field. 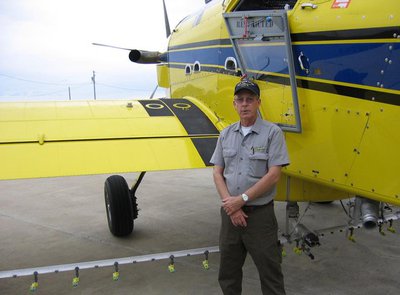 As a crop dust pilot avoiding obstacles, Mike Lee says “You have to be able to just be able to fly by the seat of your pants.” (Photo by Jacob McCleland for Harvest Public Media) 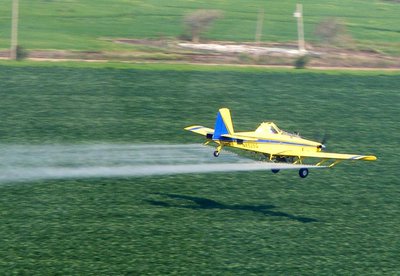 “You have to be able to just be able to fly by the seat of your pants and not even think about flying to do all of that,” Lee said. “You have to spend all your concentration looking outside and doing all the controlling the seed or fertilizer or chemical or whatever it may be at the time.”

Lee flies 155 miles-an-hour at the crazy low elevation of 12 feet. Farmers hire him to disperse seed, fertilizer and pesticides by airplane because it’s a quick, efficient way to get things done – there’s no driving out to remote fields or slogging equipment through the mud when it’s all done by air from the cockpit.

Aerial application still plays an important role in modern farming. According to the National Agricultural Aviation Association, 18 to 20 percent of commercial cropland receives some sort of aerial application.

For pilots, the hours are long. During the growing season, pilots work from daybreak to dark.

“I know some people who have had accidents,” Lee said. “I’ve had friends that got killed in these things.”

There were 68 crop dusting accidents in 2013, resulting in 5 deaths. That’s a big drop considering that back in 1994, for example, there were more than 150 accidents and 17 deaths.

Meteorological towers, also known as “MET towers,” are the newest threat to face crop dusters. They are thin metal towers that can pop in fields at a moment’s notice after farmers lease some of their land to wind energy companies that use them to gather data.

MET towers are hard to see from the air, making them potentially dangerous to crop dusters, said Jennifer Rodi, an investigator with the National Transportation Safety Board.

“They are below the 200-foot requirement that the FAA has that requires them to be lit and marked to increase their visibility,” Rodi said.

The NTSB has recommended that the Federal Aviation Administration require these towers be marked and lighted but for now that only happens in certain states.

There are other safety concerns facing aerial applicators, too. An NTSB report released earlier this year found divided attention, fatigue, maintenance, and pilot knowledge as major causes of accidents.

“(Crop dusting pilots) don’t have a large amount of time to react to any sort of an emergency,” Rodi said. “It’s important to be aware of the risks of their operations and do what they can to mitigate those risks before they take off just because it’s such a high demand environment.”

Rodi attributes the reduced number of accidents and fatalities since the 1990s to better training, more pilots with military backgrounds, and safer airplanes.

Pilot Mike Lee agrees. Standing on the tarmac at the Steele Municipal Airport, he points to one of his planes, which he said is designed to absorb energy in a crash.

“Unless you just go straight into the ground, you’re going to survive a crash in these kinds of airplanes,” Lee said. “Kind of a like a NASCAR, it’s going to disintegrate around you and most likely you’ll still be holding the stick and in the seat when it’s all been said and done.”

And that’s reassuring when flying at high speeds, only a few feet above the ground.

With Conventional Farmers Embracing Dicamba, Specialty Crops Likely Next in Line for Damage
Lower prices could inspire change in corn country
From ‘combine karaoke’ to cursing: The sounds of harvest in the Midwest