There’s still plenty of snow on the ground in parts of Nebraska, but spring is coming. With it comes the migration of sandhill cranes along the Platte River. That migration has inspired many artists, both local and visiting.

31 years ago the Stuhr Museum in Grand Island started what would become an annual exhibit: Wings Over the Platte. Each spring, one featured artist displays a selection of their art, inspired by the Platte River. Their work sits in the museum’s grand lobby, surrounded by natural light and the sounds of water splashing in four fountains. Other amateur and professional artists submit their work for a larger exhibit upstairs. This year more than 50 artists and 93 pieces were selected.

Kari Stofer is the curator of the Stuhr Museum. She says the exhibit shows how different people reflect on the same river. 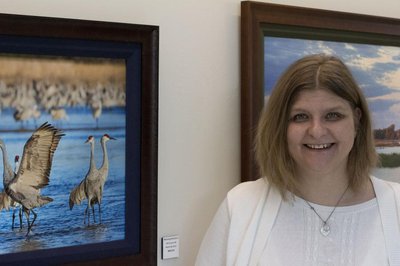 “We judge it based on their concept of expressing their Platte River experiences, how they feel about the Platte River and its tributaries, that gives it kind of a, a Nebraska area event, but they can express it however they want, abstract, realism, three dimensional, two dimensional, painting, photography, anything they would like,” Stofer said.

The art comes from artists all over the region, and with some unique stories.

One merit award winner in photography was Skylar Theil. When she submitted her piece, the name on the application and the name on the check for the entry fee were different, which stood out to Stofer. When the piece won, Stofer called Theil.

“The message was a little weird, so I decided, 'Oh, well, I don't have much time, I'm gonna call the person that wrote the check, so I called, and that person ended up being Skylar Theil's grandmother, and Skylar was waiting to meet me at the reception that night, she was twelve-years-old and she was practicing her handshake,” Stofer said. 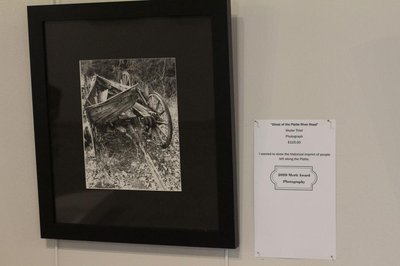 Theil’s photo is of a decaying boat near the Platte River. For photographers trying to get a picture of the cranes themselves, the Rowe Sanctuary has a special program. Photographers or crane lovers in general can spend the night in a blind on the river to take photos at sunset and sunrise.

Anne Winkel is crane festival organizer at Rowe Sanctuary. She says the program is popular.

“It's a fun way to experience the migration. I mean, as you can imagine, right now it's very cold and that is typical of March, so even though it's so miserably cold and these are uninsulated unheated blinds, people really enjoy them and come back year after year,” Winkel said.

Jorn Olsen is a professional photographer and this year’s featured artist for Wings Over the Platte. He’s never spent the night with the cranes, but he says there may be a downside to the adventure.

“If you spend a night in a blind and you're around cranes, you're not gonna get any sleep, cause they're pretty noisy all night,” Olsen said.

Olsen found nature photography through another hobby: duck hunting. In fact, one of the areas he goes to take pictures is where he used to hunt

“It's a very scenic little area and when my last dog passed away, I just decided I was gonna take up photography instead of hunting. You know, the cranes were fun and it was a challenge to figure out how you could do things so you could get close to them and it was more like hunting with a camera than hunting with a gun, and I thoroughly enjoyed that, so I spent a lot of time on the river,” Olsen said. 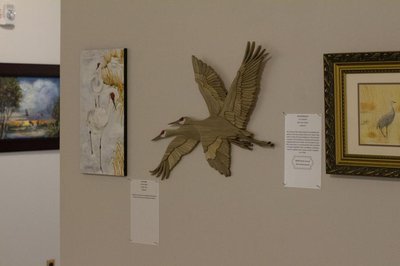 Instead of staying overnight, Olsen goes out a couple of hours before sunrise to get as close as possible to roosting cranes in the dark and then wait for the light. He described the first time he saw the crane migration several years ago.

“You know, it was really pretty awesome, and I was really close. I had a blind at the end of the towhead that I, and I put up some material around it going back into the brush so I could basically crawl on my hands and knees, and to be right there at twilight, and when the sun breaks on them and being thirty feet from the nearest crane is really pretty amazing,” Olsen said.

Back at the Stuhr Museum, Stofer says artists can help bring that experience to people who may not have that kind of access to the birds.

“Crawling down to the river at four o'clock in the morning isn't anything, isn't something that everybody wants to do or that anybody can do,” Stofer said.

Stofer also thinks artists have a special perspective on the crane migration. 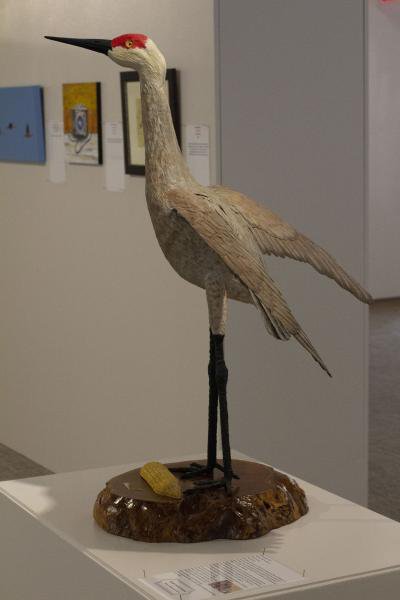 “I think artists have a unique perception of being able to kind of absorb all the different aspects of a moment, the colors, the sound, the smells, and all of that, and then want to be able to communicate that,” Stuhr said.

Crane art at the Stuhr comes in all forms, including one piece of art made up of 172 small pieces of wood. Another is a large carved crane, which was submitted by the artist’s family after he passed away last June.

The Museum of Nebraska Art also has an exhibit centered on the Platte River. Theirs is called “A River Runs Through It.”

Teliza Rodriguez is the curator of the Museum of Nebraska Art, or MONA. She says some crane pieces are less traditional. She described one piece by Wendy Weiss and Jay Kreimer, which includes sound, woven panels, and another surprising element.

“It has large crane legs that are coming down out of the sky in the middle of the gallery from the skylight, and so it has some abstraction in it, and it has humor in it as well, but it has sound, so again they were aiming to give the tones of the Platte River. What would you feel like when you go to the Platte? What can you imagine that would be like?” Rodriguez said.

The MONA exhibit includes contemporary art, as well as pieces from as long ago as the 19th century. Rodriguez says the crane migration has been inspiring to artists for a long time.

“If you have seen it, you probably would understand. If you haven't seen it, it's just so overwhelming. I mean, on all levels, sight, sound, smell while you're out there at the Platte River, feeling the cold air when you're out there watching them, and just seeing that there's something so much greater going on, and I think artists have really worked hard to try to capture that throughout history,” Rodriguez said.

This year’s crane migration will lead to its own crop of photos, paintings, and sculptures. And in turn that art will join the ranks of future year’s exhibits.

“A River Runs Through It” will be on display at MONA until June. Wings Over the Platte runs at the Stuhr Museum through April 7.