Crafting the Manual for Warfare in Space

The University of Nebraska College of Law is working with many others in crafting the Woomera Manual on the International Law of Military Space Operations. This includes experts from the US, Australia, Britain, Canada, France, Germany and India, among others. A law professor from the University of Nebraska is working with military and law experts from around the world to craft these new laws that focus on the rules of engagement in space.

"There's a long list of law of armed conflict rules that are pretty much agreed here on Earth, that need to be applied to space – before we are in a conflict," Jack Beard said.

Beard says Nebraska's College of Law is teaming with the University of Adelaide and University of New South Wales at the Australian Defence Force Academy (Australia) and the University of Exeter (UK) to finalize the manual which Beard said will be crafted along the same lines as the San Remo Manual on Naval Warfare which focused on armed conflicts at sea.

Brandon McDermott of NET News talked with Beard about this effort.

Jack Beard, associate professor of law at UNL: It's a considerable effort involving experts from all over the world to meet and discuss what these rules are – not so much where we think the world should be – but taking the roles we have now and trying to decide how they would apply in a conflict in space. A lot of people still think of space as a science fiction realm, but quite the opposite -- our economy, our society – the military in particular – are utterly dependent on space.

Along with all the commercial undertakings up in space, particularly GPS satellites on which we depend for just about everything now. Timing signals make our entire economy work from the stock exchange to industrial facilities. An armed conflict in space would not be a good thing and things that cause debris in space are not a good thing and there's all sorts of challenges that we face in dealing with the possibility that an armed conflict will likely extend to space because particularly the U.S. military is so dependent. You know this all the time when you hear about drones operating somewhere in the world – those depend on satellite signals – all of our ships and tanks depend on signals for navigation, command and control are all dependent on satellites – even our bombs can't find a target without GPS signals. 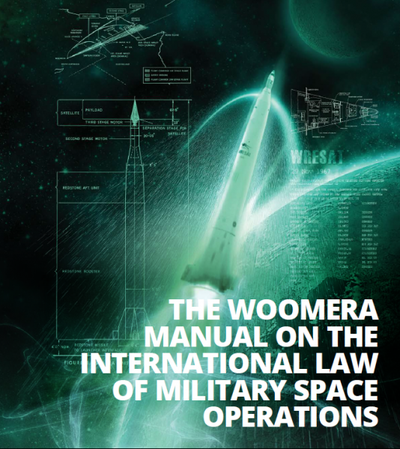 So, the US military has huge assets in space and there is a growing threat to them by our potential adversaries and so the purpose of this manual is to deal with the possibility of that conflict, before such a conflict occurs – hopefully it won't – but if it does, this is an effort to lay out the rules as we understand them now and as states practice them to the extent we can draw on that, to lay out these rules with an idea of how the possibility of accidents or misunderstandings can be decreased, the possibility that we can go over what the appropriate responses are to different sorts of threatening or hostile actions, to try to prevent not only misunderstandings but also establish more clearly how these rules that we use here on Earth apply to what could happen in space.

Beard: Many of my colleagues do. Based on the reality that if you have a major armed conflict on earth, the likelihood of it extending the space is almost inevitable. The US Strategic Command, for instance, refers to these things as a current conflict – period – which encompasses space. Since the things you depend on, on Earth, depend on satellites it would be a pretty level of certainty that those are things an adversary would like to take out.

There's another factor here too, the growing commercialization of space. With more and more launches, with more and more satellites – the individual operators the individual companies – those are the responsibility of the states under the rules that are now in place in the Outer Space Treaty. You can see, as space becomes more congested and more competitive that there are going to be problems that are likely to occur between – for instance – space mining entities. Which is no longer a far-fetched idea. As competition for resources in space grows the likelihood of a conflict grows and so you'd like to try to interpret some of the terms that haven't been applied yet in space. Phrases like “interference,” or “due regard,” which are found in the treaties haven't ever been interpreted to this point in any real detail. 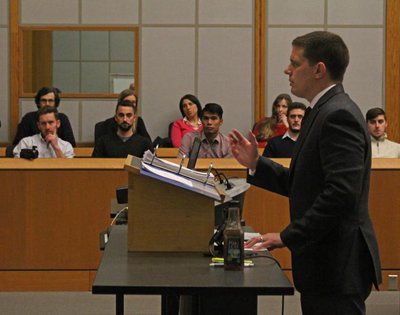 Aaron Kirk of the University of Nebraska Law College. (Photo by Bill Kelly)

This 2018 Signature Story from Bill Kelly of NET News looks at a moot court competition focused on space law involving the University of Nebraska College of Law.

Click here to read more and listen to this story.

It would be nice to know what the appropriate response is to certain actions in space and things that are perceived as hostile in order to prevent as much damage as possible to civilian objects and to civilians. The law of armed conflict has as one of its central goals preventing unnecessary or excessive damage to the civilian population. There are satellites up there that are solely dedicated to all sorts of humanitarian purposes – weather satellites, satellites related to rescue and emergency – those sorts of things aren't appropriate targets in an armed conflict and should be treated with some special regard.

McDermott: Do you believe the recent push from President Trump for a US military Space Force is a better time or a good time for a group like this to be meeting?

Beard: The Trump initiative which really was not so much a Trump initiative, as it was an initiative by a congressman and others to reorganize space and have a different focus than the Air Force had been providing, that has heightened and focused attention.

It's been a valuable process in that it's focused people's attention for the first time on the fact that there are already military activities going on in space and that they need to be carefully evaluated and considered and we need to, as a country, and with respect to protecting our assets. So that has got a lot of people talking about it and many now realize for the first time there's been a whole lot of militarization of space going on for quite a long time.

McDermott: This group includes space and military experts from Australia and the U.K. Do you feel it's important for us to be crafting this manual with some of our most important historical allies?

Beard: Absolutely. As well as others there's a heavier focus on NATO countries, Australia and Japan. But we have other delegates as well – some from China and elsewhere – and at some point, I think it's also likely that it appears governments will start getting involved in this as well, as they evaluate this with respect to their military forces in space. It shouldn't be just an exclusive club of Europeans and NATO and Australia. It needs to be broader than that, but this is the core of the initiative right now.

McDermott: There's an upcoming joint meeting of all the collaborators here in Lincoln coming up at the end of February. What do you expect out of those meetings?

Beard: This is a gathering of all the experts as they go over the rules that have been developed – the rules for the law of armed conflict as it would apply to space. These sorts of activities are really valuable for states before there's a time of crisis, to be talking about the rules of the road that have been respected and saved many lives and much property on earth in many conflicts.

So, it makes sense to do this and to have as wide a discussion as possible and it is a practical application of all of these rules and laws to something that also American law schools and lawyers hope to do for the good of society. So let's hope that space can be useful, commercialized and a place where conflict hopefully doesn't occur but if it does – causes the least amount of damage as possible.

McDermott: When do you expect these rules to be completed?

Beard: The goal is to get them done next year – sometime in 2020 – although that could be extended depending on the involvement of other states in this process.