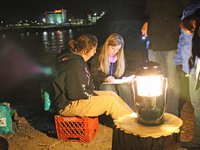 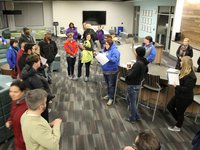 Some you see, most you don’t. The thousands of people who are homeless in Nebraska each year. Nebraska workers recently made an effort to count the homeless in the state to improve care for them. 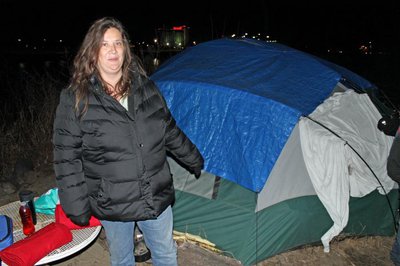 RELATED STORY: learn about Mary (above, by her tent), Justin, Jen and Ricky...their camp on the Missouri River (which they call "the jungle"....and being homeless in Nebraska. CLICK HERE for the Feb. 26 NET News story, "A Trip to “The Jungle:" the Story of Two Homeless Couples Who Live by the Missouri River" (All photos by Mike Tobias, NET News) 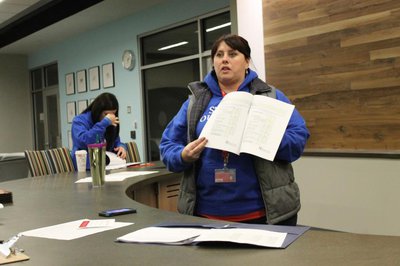 Ann Smosky briefs workers before the start of the point-in-time homeless count in January. 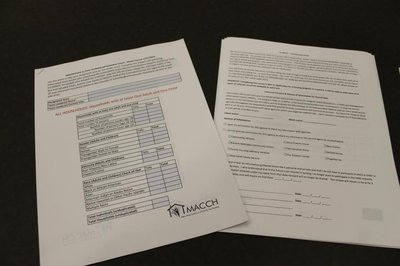 Forms workers will use during the survey.

How one Marine helped another get home, and a look at homeless veterans in Nebraska (12/15/2014)

There are different issues for workers dealing with homelessness in rural Nebraska. Cheryl Holcomb is family outreach director and co-interim executive director of Central Nebraska Community Services, and chair of the group that conducts the point-in-time survey outside of Omaha and Lincoln.

“You’re not going to see your typical homeless person that’s living in a box or living you know under a bridge,” Holcomb said. “Yes, we have that. However, ours is more, they might stay with a friend one night and another friend and another friend, where they jump from couch-to-couch. We have very, very few shelters within our areas, so that’s a huge problem in trying to count the homeless in the rural areas. I think we have two basically: in Columbus is a mission and then in Grand Island. We also have a homeless shelter for families and then a shelter for men only. So, if you have a family that’s in O’Neill, Nebraska, it’s prohibitive for them to go from O’Neill that is two hours away from Grand Island for instance, and so that’s what they revert back to is ‘can I stay on your couch just tonight,’ and usually what happens then is that person who is letting them stay is putting themselves in jeopardy of losing their housing because of the fact that they may not be on the lease or the landlord doesn’t know that they’re staying there.”

Holcomb said this makes it hard to find and help homeless people. “It is extremely difficult, extremely difficult. But usually word spreads, which is good because if a family knows of another family that is actually truly homeless. they will refer them knowing that hopefully they will meet the criteria, and you know, that’s another thing. There are so many barriers and requirements that go along with the funding that we actually do receive. It gets very, very discouraging because you can’t put everybody into the same basket, and I keep preaching that to my funding sources. You can’t put rural area into the same basket as even within the state of Nebraska, for instance, with Omaha or even Lincoln.”

Wearing a blue “Street Outreach Team” hooded sweatshirt, Ann Smolsky briefs about 40 social services workers and volunteers in a University of Nebraska at Omaha meeting room. They’ll soon head to the cracks and crevices of the Omaha metro area in an effort to find and count homeless people.

Smolsky, who works for the Metro Area Continuum of Care for the Homeless, is leading the annual January point-in--time count of homeless people in the Omaha area. A different group takes care of this in Lincoln, a third covers the rest of the state. This count happens throughout the country, a Federal government requirement to come count the number of people living on the streets or in shelters on one winter night.

“It also really helps us connect and find out not just how many people are there, but we take it a step further,” Smolsky said. “What are their needs? How can we then connect them to ongoing services so that those that are out on the streets, in abandoned buildings, sleeping in their cars, don’t feel as isolated, and then we can help get a case manager to work with them and find out what might be available.”

They set out in small groups. Because it’s organized by people who work regularly with the homeless, they know where to look and who they’re looking for. One group looks for an elderly woman who is often living downtown in an abandoned car. They call out, “outreach, anyone in there. Street outreach. Hungry?” But there’s no answer. One worker notices blankets and pillows in the abandoned car, but says they didn’t see the woman as they drove up.

Riding with Smolsky, we head to Heartland of America Park, where another group of workers will meet with two couples who live in a camp on the Missouri River.

“We get a good number that stay near the river both on the Omaha and Council Bluff side,” Smolsky said as we arrived. “They’re used to be more people before we had the big floods down there. It’s kind of thinned it out a little bit. We’re seeing a lot more people move further west actually.”

At any given time, there are Nebraskans living by the river, in cars, dumpsters and abandoned buildings, and in shelters and friend’s basements, many more than will be counted during the yearly one night survey. About 10,000 Nebraskans are homeless at some point each year; 6,500 in Omaha. Smolsky said who they are may surprise you.

“We often think of that stereotypical homeless person, maybe the older gentleman that has an alcohol addiction, or mental health issues,” Smolsky said. “But really, homelessness doesn’t have just one group. We have families. We have young parents. For the first time this year, HUD is going to be collecting data on youth/parent households. So those under 25 years old who are caregivers that are also homeless. We have veterans out there.”

“People often think, ‘oh they don’t work. They are lazy’” Smolsky added. “We have a number of people with jobs that just don’t make enough to make ends meet. A lot of people come into homelessness and they find their way out fairly quickly. There are some of those that get stuck in this process, in the system, and that’s who we try to target our resources to.”

Sarah Hughes was another leader of Omaha’s survey. She said there are many causes of homelessness. “I think poverty, lack of support,” said Hughes, who works with the homeless for her job with Heartland Family Service. “I will ask them, who’s your support? Me? You’ve known me for a week, how am I your support? The CPS (Child Protective Services) system has given up on them. Their family has given up on them, their friends, they’ve lost their jobs. They don’t have incomes. So I think poverty and support are a huge thing and then what comes with that, some people have mental health issues and an addiction to treat their mental health.”

“There’s really not a single common story,” added Charles Coley, executive director of the Metro Area Coalition of Care for the Homeless. “The stories are as diverse as every person within our homeless system of care. In this field of work, we talk about person-centered service delivery, and we remember there’s no one thing that causes homelessness. It’s as diverse as the people we see every day.”

About 10 percent of Nebraska’s homeless population are considered chronically homeless, meaning they’ve been homeless for a full year, or homeless at some point four times in a three year period. Reducing, even eliminating chronic homelessness, is one of the focuses of the state’s just revised 10-year plan for dealing with homelessness.

“We chose strategically to align our four goals with the goals of the federal strategic plan to prevent homelessness,” said Coley, who is also a member of the governor-appointed Nebraska Commission on Housing and Homelessness. “Those four goals are end chronic homelessness, secondarily end veteran homelessness, thirdly end child/family and youth homelessness and then finally, set a path to reducing overall homelessness, which is sort of the catch-all goal for other service areas. So that 10-year plan at the state level will guide a lot of what we’re doing.”

“There are certain things that work for the chronically homeless population,” Coley added. “Ending their homelessness quickly, seeing who’s high-barrier, who really needs to be housed, rather than just taking, figuratively, a thousand people and saying ‘let’s house you all.’ Let’s take those same thousand people who are homeless and see, for example, who has the highest barriers, who has mental illness and where can we place them in housing. Then even having a broader discussion about affordable housing development and housing units. So I think it’s possible very much so to reduce the numbers of chronic homelessness.

Back to the point in time survey, and workers who connected with the group of homeless people living in a camp on the Missouri River, some who would fall into the chronically homeless category. By the light of a propane lantern, they run through several pages of questions that do more than provide a simple count.

“We take into account their ability to manage their own health, manage their daily living skills, how do they interact with other people,” Smolsky said. “Are they being taken advantage of? Do they have income? From that, we can determine a level of care that’s appropriate based on the individual need. It lets us prioritize, so those that really need the most help maybe aren’t always the ones coming and asking for the most help.”

Early indications from this year’s point in time survey are higher numbers of unsheltered homeless people in Nebraska, but much warmer than normal temperatures that night likely led to more people staying outside and made finding them easier. Smolsky said in Omaha, it’s also a positive sign that outreach workers have done a good job connecting with people that need help on a regular basis, not just for the survey.

As we finished following the point-in-time survey groups, Smolsky was asked about the one thing she’d like people to understand about homelessness?

“I would say don’t make assumptions,” she answered. “There are a lot of misconceptions that people want to stay homeless, that the people are there through some fault of their own. Sometimes they are, but a lot of times it’s just an unfortunate set of circumstances and a lack of resources, and I have yet to meet someone that didn’t want to move into housing.”