Development is continuing on new barns to supply chickens for the Costco plant being built in Fremont, Nebraska, even as critics worry about negative effects from the project.

It’s a warm, early fall evening on a farm a dozen miles north of Fremont. Inside a 600-foot long barn, hundreds of visitors are milling about, looking at the equipment that will be used to bring feed and water to the 60,000 chickens that will be housed in this and two other barns here.

In the middle of the barn, Jessica Kolterman picks up a microphone.

“Alright. Thank you to everyone for being here tonight. We just wanted to take a minute to welcome you all and thank you for coming,” she said. 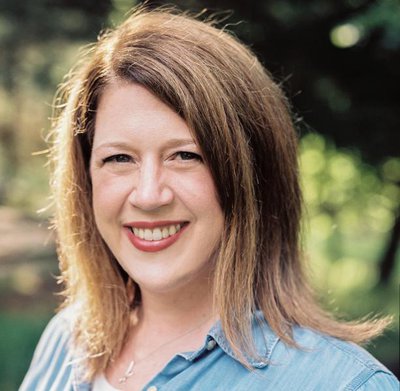 Kolterman’s with Lincoln Premium Poultry, a company created by Costco to supply the warehouse retail giant with the more than 2 million chickens a week expected to be slaughtered at its plant in Fremont. This barn site is one of 100-125 sites Costco wants its growers to have in eastern Nebraska and western Iowa. Chickens from those barns will eventually supply Costco about 40 percent of its chicken nationwide, and be sold at its stores throughout the western United States. 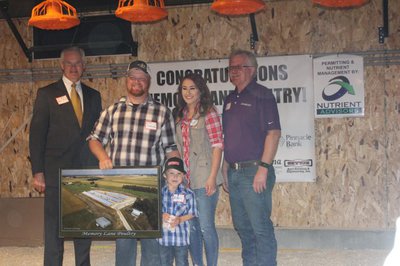 The barns being shown off this evening are on the farm Colten Schafersman’s family has owned for six generations, and he’ll run them.

“Basically the birds come here when they’re a day old. They’ll be here for 21 weeks and then they go to a breeder site. So these first two barns will hold hens, and the third barns will hold roosters. The roosters (and) the hens never get together on this site,” Schafersman said. “They go to the breeder site, they put ’em together, they lay eggs there. The eggs go to the hatchery, they hatch ‘em out and those are what are the broilers for production. They’ll go to your broiler location. After six weeks they’ll harvest them, and those are the birds that go to Costco."

Along the length of the barn, row after row of orange plastic feeders rest on a floor covered with wood shavings. Kolterman explains how they’ll work.

“The feed will come down automatically – it’s all controlled by computers. This will be down on the floor. What they do is they raise it up incrementally as the bird grows,” she said. “It’ll start at the very bottom on the floor because it’s just a chick. And then as the bird gets taller they’ll just raise it incrementally, so that the bird doesn’t ever have to strain to get their feed.” 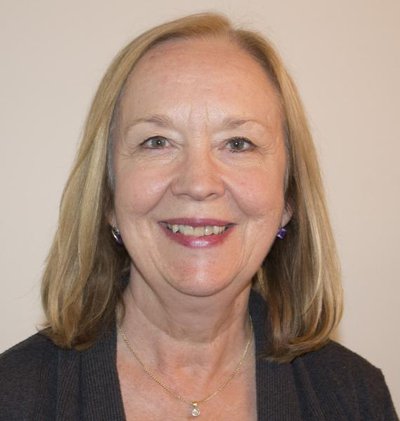 After 21 weeks when the birds are grown, the barns will be empty for five weeks, while the chicken manure and wood shavings are composted into litter that’s eventually applied to the surrounding fields as fertilizer. That’s a part of the process that concerns Costco critics like Julie Hindmarsh of Fremont.

“One of the dangers in this kind of situation is that runoff will pollute the waterways and the groundwater,” Hindmarsh said.

Hindmarsh, a public health consultant and retired faculty member from the Johns Hopkins School of Nursing, says nitrogen in the chicken litter can increase the level of nitrates in the water.

“Some of the issues with nitrates in the water are thyroid conditions, birth defects, various cancers… (and) blue baby syndrome,” she said.

Randy Rupert a farmer and a Costco critic who lives a few miles from Schafersman’s barns, shares those concerns. Standing near a bridge over Maple Creek, about a mile away from the barns, Rupert says testing already shows a high level of nitrates in the water, and any additional levels could affect communities downstream. He says Maple Creek and other local waterways empty into the Elkhorn River, which in turn empties into the Platte River. 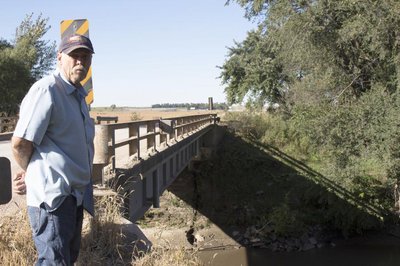 Schafersman says it wouldn’t make sense for him to apply too much fertilizer.

“It’s not economical to me to put more litter on a property than necessary," he said. “I pride myself in raising the most amount of yield on the least amount of fertilizer. So we’re not going to be dumping litter everywhere just hoping to gain extra cheap bushels. We’re going to do this the right way and before litter will go on any property, it’s going to be soil-tested. We’re going to make sure this is done correctly."

Still, critics like Hindmarsh say the barns are not subject to enough regulation.

“We don’t have the type of regulations that we would see like with the chicken processing plant. They are very strict; they are defined…But what we see in the barns is something that I don’t believe has any teeth,” Hindmarsh said.

Kolterman points out Lincoln Premium Poultry and Costco are requiring their growers to apply for permits from Nebraska’s Department of Environmental Quality, even though they don’t have to. Department spokesman Jim Bunstock confirms that, but says the effects are limited.

“The reason that they’re not required to have those permits are because they do not meet the definition of a livestock facility because they don’t discharge waste from the facility,” Bunstock explained. 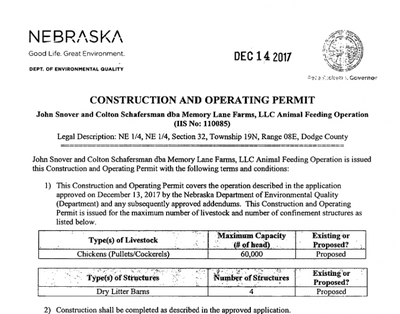 Rather than discharging liquid waste, like in a hog confinement facility, chicken waste from the barns will be contained in dry litter, which will eventually be applied to the land. Bunstock says even after the litter is applied to the land, the department still could have a role if there’s runoff.

“They have to meet the requirements for land application. Part of that is local siting and regulation; part of that may cross over into our purview,” Bunstock said.

Whether or not that’s necessary won’t be known for some time yet. Schafersman expects to receive his first chickens in December, and the Costco plant in Fremont is expected to begin operations next year.