The Board of Commissioners in Sioux County will go on the record with their concerns about a wastewater disposal well proposed by a Colorado company. At a special meeting Wednesday the board authorized the county attorney to draft a letter to the Nebraska Oil and Gas Commission. Opponents fear the project may threaten underground fresh water supplies in the area.

The action comes as the company behind the project, T-Rex Energy of Broomfield, Colorado, comes under closer scrutiny. 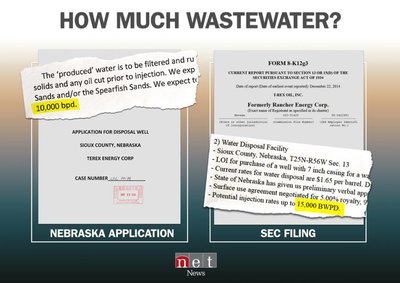 State and federal documents reviewed by NET News appear to present conflicting information about the controversial saltwater injection well. The company’s short history and uncertain status of its finances have given opponents reason to question the company’s ability to set up and manage the project.

Company officials have begun a vigorous defense of the project's merits and its own capabilities.

Two sets of reports, one with the Nebraska Oil and Commission and others filed with U.S. Securities and Exchange Commission (SEC) provide details about the scope of the project, its approval by state regulators, and the overall financial security of the project developers.

T-Rex has an application before the Nebraska Oil and Gas Commission to permit development of a saltwater injection well. The application is under the name of a subsidiary company, Terex. The company would process salt-laden wastewater left over after the process known as hydraulic fracturing, or fracking. The saltwater, known as brine, often contains chemicals used in the drilling process. The water would be processed on location before being pumped underground.

The proposed project would occupy 11 acres of land 15 miles north of Mitchell, Nebraska along a remote stretch of State Highway 29. It would be the largest operation of its type in the state.

T-Rex CEO Don Walford says the project is needed as a service to the oil industry in the region.

“Our country needs oil and gas very badly,” Walford said. “This services that business. It makes it safer. I makes it more economical.”

In the opinion of project opponent Brian Palm information about the company and its behavior to date have been lacking.

“Everything Terex has done doesn’t seem to be upfront and honest,” Palm said. “I don’t see much transparency.”

T-Rex, as required of a company selling stock on the over-the-counter market, files regular reports with the SEC. In a December filing the company claimed the “State of Nebraska has given us preliminary verbal approval for disposal well development” in Sioux County.

State law requires commercial oil wells and wells used to dispose of oil field waste to be approved and permitted by the three-member Oil and Gas Commission. Members are appointed by the governor. The director of the commission can make a recommendation, but to date that has not happened.

Commission director Bill Sydow told NET News he was not aware T-Rex made that statement.

“Well, we have talked to them, obviously,” Sydow said “but I don’t know if I would categorize that as primarily verbal approval.”

Asked about the claim, Walford said the commission’s director told him the project was well designed and commissioners would likely approve the design.

“Bill is a great guy and Bill said I don’t think you’re going to have any problem with this,” Walford said. “Forgive me if I used the words 'preliminary approval.' How about ‘we got a warm feeling from the Oil and Gas Commissioner?’ I don’t think you can say that in an SEC filing.”

The scope of the project

Two different public documents give two very different estimates to how much oil field wastewater will be delivered to and processed at the site. T-Rex, under the name of a subsidiary Terex, outlined its plans for the injection well in an application it filed with the Nebraska Oil and Gas Commission in November, 2014. That application states “we expect to have an initial capacity of up to 10,000 bpd (barrels per day). Terex expects to average 80 trucks per day with 130 bbls (barrels) per truck when operating at initial capacity.”

Inside Energy, a collaborative journalism initiative among public media, helped research this story. They've done some great reporting on these issues. Check them out HERE.

In reports filed with the SEC T-Rex gave potential investors a much higher estimate of the potential volume of water to be processed on site.

the project would have “potential injection rates of up to 15,000 BWPD (barrels of water per day)." Using the company’s formula of 130 bbls per truck, that would increase the amount of traffic to 115 deliveries a day.

Even the lower estimate concerned residents of Nebraska’s panhandle opposed to the project. Some felt the increased truck traffic along the two lanes of Highway 29 and in Mitchell specifically would be excessive. The shear amount of wastewater could create problems above and below ground.

“Our highway system is not set up for that kind of volume,” Palm said. He notes the trucks will routinely pass residential neighborhoods and schools in Mitchell.

Walford acknowledges the high truck traffic may be a legitimate concern for residents but argues it’s a necessary part of bringing a new business to the community.

As for concerns about presenting significantly different information on public reports, he says it only reflect differing information needed by state regulators and potential investors reading the federal reports. The number provided state oil regulators, what Walford called “the highest reasonable amount,” estimates the likely level of activity in its first years.

The higher estimates given potential investors, by way of reports with the SEC highlight what the project could be capable of producing. “If it’s possible to get at the 15 thousand we are supposed to say that kind of thing” in the SEC documents,” Walford said. “We have shareholders and the shareholders want to know everything that could happen. That’s the distinction.”

Walford added recent testing done by the company indicates the well could handle even higher amounts of wastewater.

The contradictory descriptions of the project have only heightened Palm’s skepticism, saying the company has been operating “back in the shadows” throughout the application process.

The SEC reports filed in December 2014 depict T-Rex as a new company which described itself as “not profitable” with “limited funds.”

The company’s primary business is oil production by acquiring existing wells. The Sioux County project is the only saltwater injection well the company has planned.

By the end of 2014 the company recognized no revenues, had “minimal capital, moderate cash” and needed “cash infusions from investors or shareholders to provide capital or loans from any sources.”

The language is common in SEC filings for many start-up companies and Walford says the report describes the company’s early stages of growth.

T-Rex Oil took over the corporate remnants of Rancher Energy, a reorganized bankrupt oil company. Only one of the officers with Rancher remains with the company.

“Because I’m an investment banker first and have been for a lot of years, I am capable of raising significant amounts of money,” Walford said. “The company is dependent on that.”

Walford says the company has raised $4 million on top of the assets that came with the acquisition of Rancher. He says he is confident he will be able, through limited partnerships or sales of shares, to raise another $5 million to finance development of the oil wells and the wastewater disposal facility in Nebraska.

For opponents of the project the financial reports filed with the SEC raise doubts about the company’s ability to carry out the project.

“Where is there cash to do their due diligence and to do this right,” asked Brian Palm, who is circulating a petition in the hopes of blocking the project. “What are they going to do to prove they can do this right?”

One paragraph in the SEC report raised particular alarm. It states T-Rex has general liability insurance but it has “not obtained insurance against such things as blowouts and pollution risks because of the prohibitive expense.”

“That worries me greatly,” Palm said. “If they aren’t going to be liable for what they are doing, who is?”

T-Rex claims it will have the resources to deal with most environmental accidents. “Yes, we have insurance for it,” Walford said. “I believe it’s now been granted.”

The State of Nebraska does not require any insurance in the event of an incident at oil rigs or disposal wells causing pollution. It does require well drillers take out a $10,000 surety bond. That expense only covers the cost of plugging the well should the owners abandon the site.

“All we can do is require that they operate under our rules and regulations after posting the adequate bond,” Sydow said.

Opponents of the project remain skeptical.

“No two stories have matched with anything Terex has done,” Palm said.

The developer says there is no reason to worry.

“The state doesn’t let you come in here if they think you are just bums,” Walford said. “They have a heck of a vested interest in making sure this is done right. And we are doing it right.”

Approval of the project rests with the Oil and Gas Commission. A necessary public hearing has been postponed for at least another month, pending appointment of a third member by Governor Pete Ricketts.

The commission’s staff recommends approval of the project. Director Sydow does not have any concerns about the company’s conflicting claims or its financial integrity.

“I see a very low risk of any downside here,” Sydow said. “The operations they have conducted so far that we have witnessed have all been done correctly to our satisfaction.”

Keystone XL Pipeline Back in Court. Here Are the Questions You Should Be Asking
Medicaid petition drive launched; Larson charge pipeline opponents got Russian money denied
Nebraskans could vote on medical cannabis; senators fight over where bills on pipelines, guns are heard