The opioid crisis continues to hurt many American families. One Nebraska man, who was an opioid addict himself, now helps others who are addicted.

Aaron Barnes said if he was lucky enough to get some sleep at night, he’d wake up in the morning with a stiff Seven and Seven. Hard liquor was his buffer between pills and sleep. After gulping down his drink, he’d be counting oxycodone pills in no time. He’d know exactly how long they would last him before he needed more.

“I became financially stable -- I had excess finances and that just enabled me to live the party lifestyle,” Barnes said.

It would be no time at all before Barnes was breaking a pill up and snorting it, because it “hits faster,” he said. If he was short, he’d be calling doctors or dealers looking for more opioid pills. He said he’d just drink more to make up for a lack of pills. He would go through a month’s worth of pills in one week. 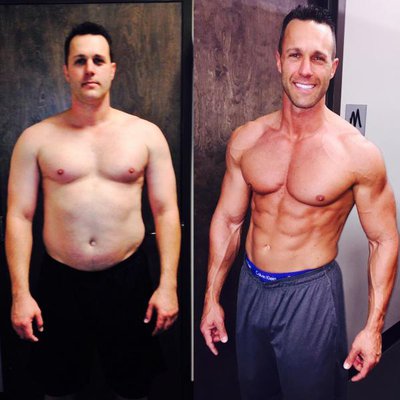 Aaron Barnes has had quite the transformation. (left, the day he entered rehab) (right, Barnes now)

“I knew that I had become suicidal,” Barnes said. “I wanted to quit doing drugs I wanted to quit for a long time, but what I didn't realize is that there were underlying causes of my addiction.”

Barnes said stopping opioids is a “mental and physical nightmare.“

“When you crawl to the toilet,” Barnes said. “When you lay in your own pool of sweat, when your stomach is in such pain that you literally scream in agony. Being a father is hard when you're barely a human being.”

Opioids are a class of drugs that include the illegal drug heroin as well as lawful prescription pain relievers such as oxycodone and hydrocodone among others. According to the Centers for Disease Controls and Prevention in 2016, 214 million prescriptions were written for opioids -- nearly enough to give every American adult their own bottle of pills.

Nebraska State Senator Brett Lindstrom, a Republican in the officially non-partisan Legislature, represents a district in northwest Omaha. Lindstrom wrote an op-ed recently about opioids in Nebraska. Barnes read it and called Lindstrom to set up a meeting to discuss potential legislative ideas to combat the opioid epidemic in the state.

"So I'm always fascinated when I meet people that are able to overcome the addiction and he was one of them," Lindstrom said."He is one of the most passionate people that I’ve probably ever met."

Would limit amount prescribed to a minor to a week's worth of pills. She said there is also the possibility of introducing another bill that would have the same impact on adults as well. It would depend on how the first bill fairs.

This would require a member of the medical team to outline to a patient, the possibility of becoming addicted and the extreme side effects to opioids. Howard said It would also allow for patients to notify physicians that they’ve previously had an opioid addiction.

"We want to make sure that there's somebody on the medical team who is explaining the risks associated with opioids," Howard said.

A third potential legislative bill Howard is looking at introducing focusing on inmates who’ve had opioid addictions. Upon discharge the Nebraska Correctional Institution's inmates may be offered some type of 30-day injection that addresses opiate cravings, Howard said. Howard points to Ohio and Maine as two examples of this type of program having success.

Lindstrom said he has had a family member deal with opioid addiction. He knows what it’s like to see someone you love fight a dependence on opioids.

“This is going to be an ongoing struggle that we have,” Lindstrom said. “Of course, it's an epidemic that the country is facing right now and I know the Trump administration has discussed tackling that as well. So, it isn’t just Nebraska – it affects every state in the union.”

Lindstrom said there may be some challenges this legislative session.

“Any bill coming up on the floor that has a fiscal note -- it probably doesn't have a chance really,” Lindstrom said. “So, we're able to maybe do some bills with regards to opioid addiction that aren’t necessarily tied with a fiscal note.”

A bill’s fiscal note shows the fiscal impact of the bill – just how much it will cost to do what the bill requests.

Nebraska State Senator and Democrat Sara Howard has dealt directly with opioid addiction in her family too. Her sister Carrie died in 2009 from a prescription opioid overdose. She has spent much of her legislative career introducing bills that would combat the opioid crisis in Nebraska. In 2016, the Legislature unanimously passed a prescription drug monitoring program in the state. Howard said there is still work to be done. For example, she’s drafted one bill that would create a cap for minors on opioid prescriptions.

“This would tell a physician that they could only prescribe a week's worth of opioids to a minor and they couldn't go above that unless there were specific circumstances such as hospice care or palliative care,” Howard said.

Howard reached out to several physicians, she said the response was clear:

“A lot of times when they're faced with an addict who very persuasive they would like to be able to say, ‘well the state of Nebraska doesn’t allow me to give you more.’” Howard said.

Howard said there isn’t any fiscal reason this or any bill shouldn’t be passed this upcoming legislative session.

Aaron Barnes said he went through several rounds of rehab over many years before it finally worked for him.

“When I was able to address the underlying causes of my addiction that's when I knew that there was hope,” Barnes said. “I knew that we were on the something.”

He said he had to want to quit and he needed a solid support system for him to be successful. It’s been two and a half years since he’s used opioids. He’s turned the need to escape reality with drugs to a need to help others with the same struggles he has. And he has a specific idea on how to do that.

“A nonprofit campus that addicts can come and get proper detox, proper care (and) proper support,” Barnes said. “And make it a holistic based program -- in the sense that we use things that help people not just get sober, but live life to the fullest.”

“I just want to make it to where when you're ready for help that our state is ready to step up and help you,” Barnes said. “That's a dream come true if -- when that comes to be.”

Barnes said he knows it is an uphill battle trying to get financial support for his “recovery campus.” He said it will be take a combined effort of public and private entities to make it happen. He said it could give hope to the addict who wants help.

“That you feel like there's no hope in that there's no way you're ever going to be whole again much less happy,” Barnes said. “But I just want to beg addicts out there struggling from the hell of addiction to ask for help. And know that you can get sober and there is life after addiction.”

Senators Lindstrom and Howard say they will keep working on legislation to help Nebraskans suffering from opioid addiction get the help they need.