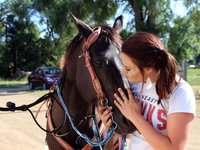 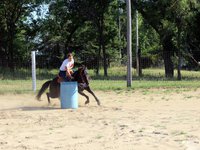 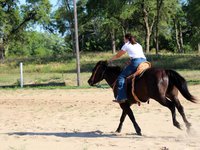 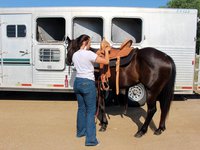 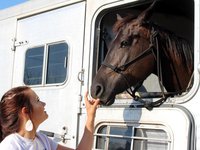 The COVID-19 pandemic cancelled college athletics across Nebraska and the country. This fall, students returned to dramatically different practices and competitions.

With mostly outdoor events and already distanced athletes, college rodeo has mostly bucked concerns over safety: four of the 11 college rodeo regions in the U.S. cancelled their fall seasons, hoping to make up the events in the spring.

Laurissa Wilson, a student at Northeast Community College in Norfolk, has gotten used to practicing in an empty arena.

"There used to be fences all around, panels all around," Wilson said. "And now pulling into the arena, it's weird not seeing horses all lined up against the trees."

Wilson competed in barrel racing on Northeast's rodeo team last year. She’s taking general education classes before eventually transferring to a veterinarian program somewhere else. She chose her hometown college partly so she could compete in college rodeo. 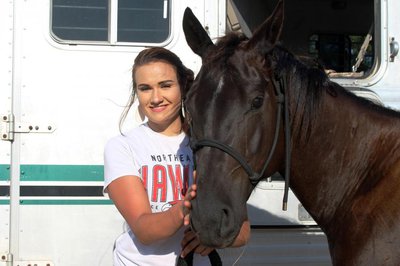 Laurissa Wilson will eventually transfer to another college so she can continue to rodeo with Jetta (Becca Costello, NET News)

"We had four rodeos in the spring, and all of them got canceled," Wilson said.

But in early June, she got an even bigger shock.

"I got a phone call from Coach saying, 'Hey, there's no more rodeo team, just to let you know,'" Wilson said.

Northeast cut the rodeo team entirely, after just one year.

"When COVID-19 hit, every college campus ended up losing a lot of funding," Kohler said. "So we had to take a look at all of our athletic programs. And rodeo was one, because it was our newest program, was one that we decided to make a decision on."

"I was shocked," Wilson said. "I felt like I didn't know what to do. My mind was all over the place. Like, do I hurry up and transfer?"

Wilson is staying at Northeast for the fall semester, but plans to transfer to Eastern Wyoming College by next year so she can keep taking her basic courses and rodeo at the same time. In the meantime, she can compete professionally without losing college eligibility.

Gauge McBride of Kearney is also headed out of state for college rodeo. The pandemic interrupted his last year of high school rodeo. 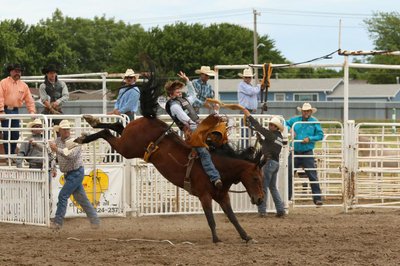 "I think Nebraska has 28 rodeos and we went to all of them every year, and it was my favorite time of year. Still is," McBride said. "In my opinion, it’s probably the greatest sport on earth."

All the spring rodeos were cancelled this year, but McBride made his professional debut this summer in North Platte. He says a rodeo during a pandemic is a pretty unique experience.

"They got these huge grand stands and all that. And with nobody in it, it doesn't feel the same," McBride said. "It's real quiet. They still play music and stuff, but I mean, it's just you and the other riders there."

Panola is in the Southern Region of the National Intercollegiate Rodeo Association, which has five rodeos scheduled in five towns across Texas and Louisiana. They’re hosting the region's first event this weekend.

"Some are operating without fans completely," Neely said. "Some are 50% capacity, some are parents and contestants only, some are doing temperature and COVID testing before they're allowed to compete. They're all over the board, to be frank."

The Great Plains Region opted for a condensed schedule, with the first event at Mid-Plains Community College in North Platte last weekend.

"It looks like we're going to get to go to six rodeos in the next three weeks and get our fall season over in its entirety, but in a shortened schedule," said MPCC rodeo coach Garrett Nokes . "And get the chance at the points that they deserve to be able to win." 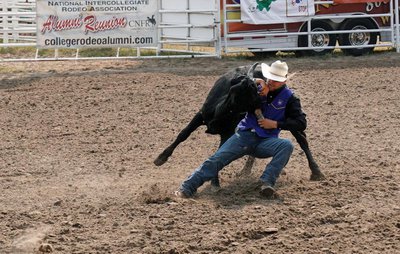 MPCC Rodeo Team member Zane Patrick, of Bartlett, throws a steer in the steer wrestling during the first competition of the season. The effort earned him third in the first rodeo. (Photo Credit: MPCC)

This weekend the team will be in Fort Dodge, Iowa, then Dickinson, North Dakota a week later.

With mostly outdoor arenas and virtually no contact between athletes during competition, Nokes is confident the events will be safe. But moving ahead with fall rodeo could be risky for another reason.

"A rodeo with no spectators is awful hard to put on," Nokes said. "I mean, it's less appealing to sponsor rodeo that doesn't have spectators, so you lose sponsor money. And then on the other end of it, you lose that money that the spectators would pay to come and watch."

Sarah Neely says all colleges in their program are going to face similar issues, and she’s a little concerned about the long-term impact.

"Because that is how you fund your event, you fund your scholarships, you fund your program. And it will be a challenge that will be felt next year," Neely said. "So if you don't have a banner in the arena, whether it's a $500 banner or a $10,000 banner from your local feed store, your local bank or whomever, you're hindering your program…And frankly, those businesses are suffering as well."

But, she says, schools are committed to making it work.

So is Laurissa Wilson. She can’t do college rodeo with Northeast this fall, but she’s already looking forward to joining a new team sometime soon.

"It’ll feel weird with not having this group from Northeast," Wilson said. "I'm I get a little emotional. They were family; it's kind of hard. But I mean, once I go to a different school, there'll be a new family."