2020 has been a dry and unusually warm year in Nebraska. At the latest meeting of the state’s Climate Assessment Response Committee, state climatologists said it seems likely those conditions will mostly continue into the new year.

Over the past 6 months, drought across the state surged. Data from the U.S. Drought Monitor, housed at the University of Nebraska-Lincoln, shows 56% of the state was experiencing mild to severe drought in July. That number has since jumped to 94%, with the state’s less dry zones largely in the sandhills.

The same story is true regionally: just 14% of the High Plains area was in drought this time last year. Right now, about 80% is impacted, with drought worsening in many areas throughout the fall.

“What we're seeing in the Plains region, especially in the central to northern Plains, is a lot of areas with two to three class degradation during that three month period,” said Brian Fuchs, a climatologist with the U.S. Drought Monitor housed at the University of Nebraska-Lincoln.

“But then you see places like Iowa, where we've seen one to two, even three class improvements during that same timeframe. So what that’s showing is there has been some precipitation in the region, but most of that has missed Nebraska.” 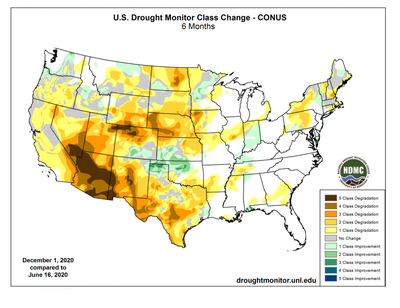 This map shows the amount of drought increase over the past six months. (Photo courtesy of Brian Fuchs, United States Drought Monitor)

Drought is a fairly regular visitor to Nebraska’s climate. The state’s last bout of serious widespread drought struck in 2012.

“We were on a pretty good six year run, [there was] some ebb and flow, some moderate drought, a little bit of severe drought in 2017,” Fuchs said. “But realistically, from 2018 on, we haven't dealt with any drought in the state. And so as this has blown up, it's not unexpected.”

Farmers have reported mixed impacts on their operations. The USDA earmarked six counties in Nebraska in September as primary natural disaster areas due to drought, making local farmers eligible for emergency loans. But dry weather was also a boon to many farmers’ fall harvests, marking the fastest end of season since 2012.

2020 yields across several key commodities are also on track to break records: As of November, Nebraska’s 2020 corn crop is forecast at 1.82 million bushels, up 3% from last year, and soybean predictions are 299 million bushels, a 5% increase.

So far, winter wheat in some dry areas has not been so lucky. According to the National Agricultural Statistics Service, 26% of wheat is currently rated poor to very poor quality, with emergent crops struggling.

Coming into the fall, dry conditions have run parallel with warmer than normal temperatures.

In her most recent statewide climate summary, state climatologist Martha Shulski wrote “there were nearly too many daily temperature records to count” in November, the 5th warmest on record since 1895. The record follows three decades of steady November warming by about 4 degrees. 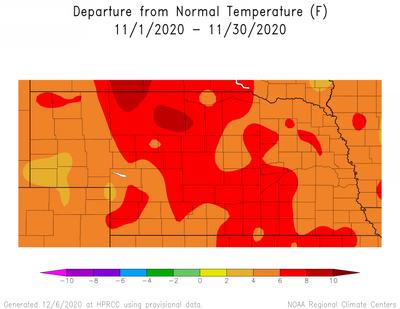 Above average temperatures were seen across the entire state of Nebraska in November. (Photo courtesy of Martha Shulski, State Climatologist's Office, UNL)

Pack it up, Irving Berlin.

But predicting Nebraska’s later winter weather is more fickle. “Unfortunately for where we fit within the U.S., the climate predictions are not as strong as it is for areas to our north and areas to our south,” Shulski said.

A “la Niña” weather pattern is currently in effect across the country, marking cold and wet zones in the north and a warmer, drier south. Nebraska exists somewhere in between those two poles, suggesting an “equal chance of above, near or below normal” temperatures and precipitation.

“What this means is [precipitation and temperatures] are more dependent on the exact position of the jetstream and storm track.”

However, Nebraska is trending at a slightly higher likelihood of dry weather in coming months.