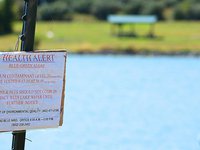 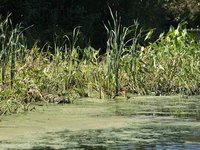 Four lakes in Nebraska started autumn with a summertime problem. In years past persistent blooms of toxic blue-green algae and E. coli would have dissipated weeks ago.

Water sampling done by the Nebraska Department of Environmental Quality show toxins generated by the slimy plant life were just above or near levels considered dangerous to humans and animals. This season they flourished during a warm September and October.

While scientists can’t say any specific toxic algae outbreak was brought on by the gradual warming of climate change, some researchers believe the trend, seen in even greater levels in other Midwestern states, is a factor and will happen with greater frequency as the atmosphere gets warmer. 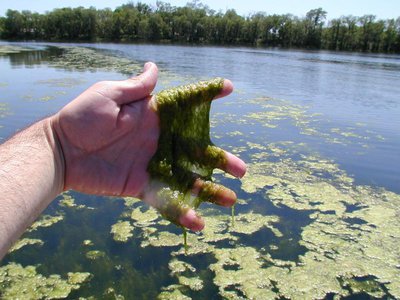 “Oh absolutely,” said Dr. Ali Kahn, dean of the College of Public Health at the University of Nebraska Medical Center. “You get increased algal blooms. You get increased marine toxins that in turn make their way into your food supply.” Humans and pets can suffer from kidney and nerve damage if they come in contact with the algae. It’s one of many examples Dr. Kahn uses to demonstrate how Nebraskans already experience the impact of a warming planet on their health.

“There are a very clear, specific diseases and more importantly health conditions that are of concern with climate change,” Khan said.

Khan, formerly with the U.S. Centers for Disease Control, argues as the effects of global climate change make their presence known on the Great Plains, government officials, those in the health care community and businesses need to consider how more extreme weather conditions might impact the health of the state’s residents on a wide scale.

“So for me, climate change is fundamentally a public health issue,” Khan said. “The reason we focus on climate change as a defining characteristic of this century is because of the human health effects.”

He does not like hearing the current trends being compared to the cliché’ warning of ‘the canary in the coal mine.”

Khan says the analogy “suggests that it's coming. Climate change is here now and we see health effects of it today and we've been seeing it at least for the last decade or so.”

A report commissioned by the University of Nebraska-Lincoln’s Institute of Agriculture and Natural Resources (IANR) considered the implications of climate change on the state, including the impact on public health, and concluded current trends threaten human health in many ways, including impacts on air quality, illnesses transmitted by food and water, as well as disease-carriers like ticks and mosquitoes.

The report adds climate change will “amplify some existing health threats” especially in vulnerable populations like children and the elderly.

“The implications of climate change are dramatic,” said Dr. Don Wilhite, one of the three authors of the Nebraska climate change report. “And they're going to affect all of us.”

Wilhite of UNL’s School of Natural Resources notes while there is no statewide climate change response plan, individual state and local agencies have taken interest in what can and should be done to plan for the public health impacts.

“We have some infrastructure in this country that particularly some of the developing countries do not have that allows us to do things from the county level on up,” Wilhite said. “We have mechanisms in place to actually educate the public and to track the occurrence of various kinds of diseases and how these are spreading as they become more frequent in Nebraska.”

The IANR report notes Nebraska and the northern Great Plains have “visibly experienced” the effects of climate variability by way of shifts in temperature, participation, and the longer growing seasons experienced by the region's farmers and ranchers.

Among the trends the climate scientists foresee for Nebraska:

The UNL study states the “magnitude and rapidity of the projected changes in climate are unprecedented.” 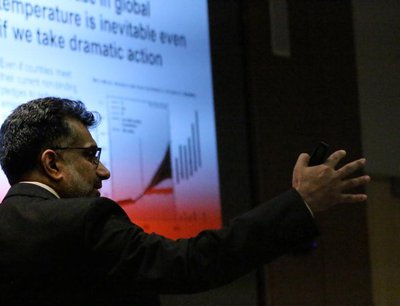 In a recent talk at the Med Center for health professionals and others interested in climate change, Dr. Kahn specified a number of health concerns and medical conditions already showing signs of evolving in the Midwest. In his power point he shared research showing traditionally tropical diseases, like Cryptococcus gattii and Dengue fever, beginning to migrate northward. Tests done on fish caught in the state by Nebraska Game and Parks discovered more cases of mercury-contaminated fish, presumed to be from higher rainwater runoff. There are indications respiratory problems will increase.

“Specifically, heart and lung complications from air pollution, increased allergens will exacerbate your asthma,” Khan said, pointing to studies predicting more dust, pollen from changes in plant growth patterns as well as smoke from increases in the number of grass and forest fires sweeping the region.

“There's no new magical disease when we talk about the effects of climate change,” Khan said. “What we're talking about is exacerbations of existing conditions and changes in where they are likely seen.”

Already there are indications of regional changes in the location, type and quantity of insect pests responsible for health problems. “We can't forget the risk from mosquitoes and ticks (as they) move into different parts of the United States,” Khan said, adding doctors should be aware they may be seeing illnesses not previously common to the region.

“Just because you've never seen a case of Lyme disease, there may be new vectors in the state (you) need to be thinking about what that means for patients,” Khan said. “That's what I expect from the clinicians. They really need to be think more broadly about what these diseases are and then they need to make sure they're well versed (and) know exactly what they need to do to create it and treat the patient.”

Khan says it’s not only government planning. Businesses and other public institutions need to think about how heat waves or extreme weather might affect the people they serve in the community. He often uses nursing homes as an example. Facilities that care for the elderly should “want to make sure that (they) know what to do if temperatures go above one hundred degrees outside. Has that got some impact on you?” he asked rhetorically. “If you happen to (operate) a school I want to make sure you're protecting my kids if it happens to be a day with very high ozone levels and lots of particulates in the air. Do you really have a plan on what to do?”

The debate is restricted to precisely how these changes will play out and what actions we will need to take to adapt to and mitigate the effects of these changes.

Wilhite is hopeful state officials will be willing to discuss and implement long-term planning measures to address what the UNL researchers feel are nearly inevitable shifts in climate behavior.

“We're beginning to see this by state agencies, but they need to be more aggressive,” Wilhite said. He says the state’s top leadership needs to support legislation that creates a state response plan and lays out mandates for state agencies to consider the issues.

The state legislature delayed acting on bills dealing with the issue in the last session, requesting time to review the report prepared by IANR. New legislation is expected in the coming session.

The authors of the report hope the compiled research will “lead to a higher degree of awareness and the initiation of timely and appropriate strategic actions” in Nebraskans.

(Editor's Note: An earlier version of this story referred to Dr. Khan as the dean of the School of Public Health at the University of Nebraska Medical Center. This was a reporter's error. The current version properly identifies it as the College of Public Health.)