A proposal to update a requirement for Nebraska schools to teach “Americanism” ran into resistance from opponents who think the subject should not be taught at all. And a public hearing was held on what can, and cannot, be called “meat.”

Sen. Julie Slama is chief sponsor of this year’s attempt to update the Cold War era requirement that Nebraska schools teach “Americanism.” Her bill renames the subject as American civics and does away with criminal penalties for failing to follow the law. A proposed amendment (to see the proposed amendment, which would replace the original bill, click here) also drops a requirement for high school students to take the same test that foreigners must take to become citizens.

Slama said the proposal is one that a wide range of people should be able to support. “This represents a promising first step that, regardless of political ideology or urban/rural backgrounds, that we can find common ground on issues that have, in the past, encountered insurmountable division,” she said.

Sen. Patty Pansing Brooks, who had objected to the citizenship test, praised Slama’s efforts to find a workable compromise. “I’m grateful because this is way, way better than this was in previous years,” she said.

Instead of requiring the citizenship test, the proposed change would make it one of three options. The others would be to attend a meeting of a public body, like a city council, and do a paper or a project on it, or to do a paper or project on one of several holidays listed in the bill, including George Washington’s or Martin Luther King Jr.’s birthdays.

Sen. Ernie Chambers objected to the bill, pointing, for example, to its requirement of discussing “American heroes”:

Sen. Megan Hunt also objected to the bill’s encouragement of patriotism, saying students should be allowed to develop that on their own. “What I really favor is de-emphasizing patriotism in education, and instead teaching people to think for themselves and deliberate about our nation’s future, and our government, and our policies, and how people want to engage with that civically, on the basis of rational principles,” she said.

Sen. John McCollister supported the proposal, saying it might help fill some important gaps in public knowledge. “When a third of the people you interview can’t name the three branches of our government, we know we have a problem. And this bill will perhaps move the dial a little bit toward more education,” he said.

Senators adjourned for the day without reaching a first-round vote on the bill. Debate’s expected to resume Wednesday.

Sen. Carol Blood, who introduced the bill, showed the committee examples of products labeled as “Beef” with the words “Flavored Vegetarian Meat Substitute” in much smaller type, or another labeled “Vegan Whole Turkey” with a picture of a turkey on the box. “We aren’t going to be the meat police. But we certainly are going to be able, if we pass this bill, to allow consumers to take control when they feel they’re being deceived,” she said. 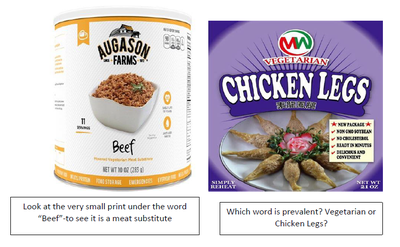 A variety of farm groups including the Nebraska Cattlemen, Pork Producers and Poultry Industries supported the proposal.

Lobbyist Kent Rogert, representing Impossible Foods, which makes what it calls plant-based burgers, was among those opposed. Rogert said ingredient labeling already tells consumers what’s in food, despite a long list of names that could be misleading. Rogert reeled off a long list of such foods, including soy milk, coconut milk, oat milk, almond milk, sweet bread, head cheese, popcorn shrimp, Rocky Mountain oysters, and gummi bears. “They’ve got names, but it’s clearly labeled on the product what they are,” he said.

As originally drafted, the legislation would have defined what meat is. But because that could invite lawsuits, Blood is proposing to change the bill so people could complain to the attorney general if they thought they were being deceived, and that office could sue under the state’s Pure Food Act. The committee took no immediate action on the bill.