In the wake of President Donald Trump’s decision to pull the U.S. out of the Paris Climate Agreement, cities and states around the country have stepped forward to reaffirm their commitment to preparing for and addressing the impacts of climate change. Here in the Heartland, a group of cities has already been working to integrate climate change data into planning on the local level.

“The overarching goal is to increase resiliency to extreme events and to climate variability and climate change. And the way we can do that is through incorporation of climate information into planning,” Shulski said.

Cities already have to work decades in advance to decide things like how much water and energy they’ll need or how much wastewater plants can handle. But cities often don’t have climate specialists on staff. And preliminary survey data of more than 300 municipalities in Iowa, Kansas, Missouri and Nebraska shows that 50 percent use very little to no climate data in their planning efforts.

Shulski says this project, funded by the National Oceanic and Atmospheric Administration, aims to help cities include historical and projected climate data in that planning.

“Cities are looking decades out into the future so what the future climate's going to be is very important to them,” Shulski said.

Shulski leads the project with Natalie Umphlett, interim director of the High Plains Regional Climate Center. The University of Nebraska Public Policy Center is also a partner. It’s based on earlier work Shulski and Umphlett did pairing city managers with local climatologists. This time, they created detailed climate reports for each participating city.

“Part of what we did is work with the cities to figure out if there are certain thresholds that were important to them,” Umphlett said. “So for instance, a concern might be energy demand or public health, you might have people working in parks and rec that are outside during the summer. So that translated into, for the climatologists, we should look at heat waves. So have there been changes in heat waves through time?”

In addition to its own local climate, each city has its own particular challenges and planning resources. Umphlett says she tailored the climate information to the needs of each city, including historical patterns and future projections.

“Anybody can go out and grab the data. But translating it into something that is meaningful to them is really important for this project. And that's what we try to do with these reports.” Umphlett said. 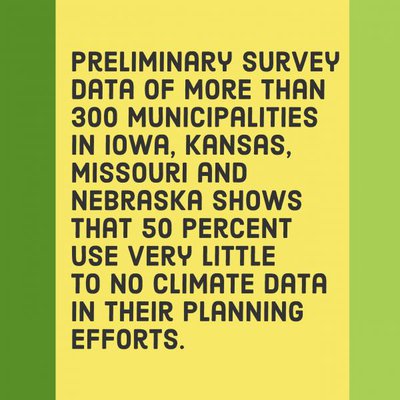 There are thirteen participating cities in four states: Nebraska, Iowa, Kansas and Missouri. Their local climates vary considerably: cities on the eastern side of the region, like Dubuque or Springfield, may get twice as much precipitation as those in the west.

“We thought it would be good to capture that range so that hopefully more cities can catch on to this and use this type of information for their planning,” Umphlett said.

In the future, Shulski says cities also asked for a tool to look across the region to consider how climate change will vary from place to place.

“‘What is my climate going to look like? And is there a current location that I can look at their climate and compare it to?’ And it's never going to be an exact comparison. But at least it gives somebody something to visualize and think about,” Shulski said.

In March, representatives from each city met for a conference in Lincoln to discuss the climate challenges facing their communities. They also heard from the city of Lincoln, including sustainability and compliance administrator Frank Uhlarik.

He’s a partner on the project, and says his role included giving the city's perspective. “How we look at climate data or how we don't look at it, how we should be looking at it and how we can better integrate that into our sustainability planning,” Uhlarik said.

Uhlarik says certain divisions of the city, like water supply and wastewater systems, already rely heavily on climate data. He’s currently working on a city sustainability plan to expand that to more areas, like energy efficiency and emissions reductions.

“Climate touches all those items. And I'd have to say, you look at the data and try to wrap your brain around it, and what I walk away with is, it could be drier, it could be wetter, it's certainly going to be warmer. And as long as we're accounting for those in all of our emergency preparations and other policies that we implement in the city, I think we'll be in good shape,” Uhlarik said.

McCook, in southwest Nebraska, is another participating city. City Manager Nate Schneider says a few serious droughts in the last 15 years made the city step up its climate planning. He says they already rely on the regular reports from the National Drought Mitigation Center, based at the University of Nebraska-Lincoln, but learned new information from their detailed climate report. 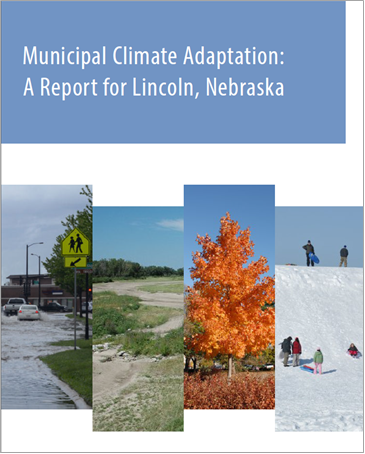 Each report was tailored the climate information to the needs of each city, including historical patterns and future projections.

“I was kind of surprised to see that the rainfall for the McCook area has actually increased over the course of the past 50 years, if I remember correctly by about 9 percent,” Schneider said. “It’s weird, the way it works out, the rainfall is increasing at certain times of the year and decreasing in other times of the year.”

Schneider and representatives from other cities say having the data specific to their area makes it easier to gain support from decision-makers for climate planning efforts. Schneider says he also benefitted from talking with other cities at the conference.

“It kind of made us think about things that could happen based upon conversations that were had with other communities, and making sure that we had rules and regulations in place to cover those types of contingencies,” Schneider said.

Schneider says he and other staff could a better job of communicating climate information with the public, like during drought-imposed water restrictions. He says social media may be one tool for that. Climatologist Natalie Umphlett says that was a common request among participating cities – data they could share in a one-page document or even a tweet.

“Breaking the information down into these bite-sized, digestible segments is really important to the cities and it's not something that I think climatologists are used to. So we're trying hard to get that information into forms that people can use,” Umphlett said.

More of that data may be within reach for other cities soon: Umphlett says they’ll have an online tool other cities in the region can use to do their own climate analyses within the year.