For years, Latino immigrants have filled some of the least-glamorous, most physically taxing jobs in farming. But the current generation of Latino children may be uniquely qualified to lead the Midwest’s agricultural economy in the future.

In a dimly-lit lab on the Des Moines, Iowa, public schools’ agricultural science campus, students in aprons, safety goggles and plastic gloves poke and probe chicken wings. About 15 girls and just one boy in this vet careers class are looking for ligaments, tendons, cartilage and other features of this animal part that teenagers more often experience cooked and covered in barbecue sauce.

The 17-year old senior, with her hair pulled back in a ponytail for the dissection, high-fives her lab partner when they identify the ligament and show it to their teacher. This young woman is a chapter officer in the Des Moines FFA group and recently got elected to a district-wide leadership position. She’s already earned a full scholarship to Iowa State University and aspires to be a large animal veterinarian with her own small cattle herd.

Her name is Melissa Garcia Rodriquez. Born and raised in Iowa, Garcia comes from a Mexican family.

More from Harvest Public Media: Young immigrants search for home on the farm 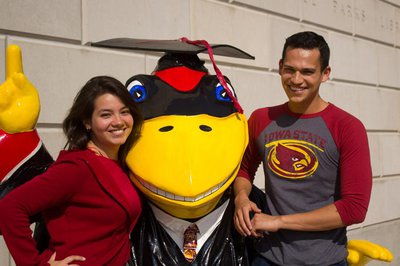 Iowa State University sophomore Christina Gonzalez and her older cousin Brian Castro have chosen to study agriculture, but say they understand why many children of immigrants steer clear of farming and horticulture careers. (Photo by Amy Mayer, Harvest Public Media)

“My mom came to the U.S. She went to California first,” Garcia said. “She met my dad there, on a strawberry field and they shared a bean taco.”

The couple eventually moved to Iowa and found jobs that were not in the fields. But in the Heartland, as in California, many immigrants find work as dairy hands, crop pickers and, especially, on meat processing lines.

Mexico is the single-largest country of birth for immigrants in the Midwest. Iowa, for instance, now has four school districts in which more than 50 percent of the student body is Hispanic or Latino. Each of those communities is also home to a meat processing plant. Still, Garcia says she often feels isolated.

“Personally, I have not met any other Latina or Latino students in the FFA, except for maybe one that I met my sophomore year,” Garcia said.

Many second-generation Latino Americans grew up watching their parents toil in hard, undesirable farm jobs. That’s turned some of them off of a career in the Midwest’s most important business.

“They see it as, this is something that my parents did and they came here for me to do something better,” said Christina Gonzalez, a sophomore in the College of Agriculture and Life Sciences at Iowa State University.

Gonzalez thought she was going to study theater in college. But her older cousin Brian Castro, an Iowa State graduate, drew her into the College of Agriculture. They both grew up on Chicago’s Southside, their parents all immigrants from Mexico. Castro says the role for bilingual, bicultural Latino Americans in agriculture goes far beyond the entry-level jobs of many new immigrants.

“There's a huge misrepresentation of the Latino population,” Castro said, “of Latino workers in the decision-making area for agriculture, even though they are the No. 1, the main population of the workers.”

Castro says people like him can be an important go-between for farm managers and recent immigrants. Many of agriculture’s biggest players are lobbying for a permanent guest worker program because farm workers from Latin America keep the industry humming.

“The careers in Iowa agriculture, agri-business, really seem to me to be a very excellent position for students in the future who speak English fluently, speak Spanish fluently [and] understand the Hispanic culture, Latino culture,” said Dale Gruis, a consultant with the state’s education department.

But Latino enrollment in agricultural science classes at high schools and community colleges is out of sync with the Latino population growth, according to Gruis. That’s consistent with the experience of Latino immigrants in California’s farm-rich Central Valley, according to Charles Boyer, dean of the Jordan College of Agricultural Sciences and Technology at California State University, Fresno. He says the first generation raised in the United States is typically resistant to pursuing careers in agriculture. But there are exceptions.

“There’s always some of them who do and they’re sort of the leading edge,” Boyer said. “And they show the way and kind of provide the role models for the third generation to step in and do it even more.”

Melissa Garcia says she’s found her passion with livestock. She has already raised and sold sheep and soon, she’ll be raising her first steer.

“There’s a career and a job out there waiting for me,” she said. “And then hopefully one day I’ll reach my goal of having my own farm.”

It’s a lofty dream for anyone with no family land to work. But in a way, Garcia would be carrying on both a family and an American tradition. Her grandfather raised cattle in Mexico. And her parents have worked hard in the United States so that she can do whatever she wants.

For more on how immigrants are impacting agriculture in Nebraska, watch the NET News and Harvest Public Media program Hispanic Farmers on Broken Ground.

Whiteclay, helmets, Challenge to Chambers, farm repair discussed in Legislature
Drivers licenses for "Dreamers" advanced; senators override Ricketts' veto of gas tax hike; LGBT job discrimination bill put off 'til next year
Back from war, on to the farm