On February 15, 1869, Nebraska lawmakers took about a day to establish a brand-new land grant university, the University of Nebraska-Lincoln. It was a lightning-quick process and part of the Morrill Act of 1862, which gave federal land to states if they established new colleges. The early years of UNL weren’t easy, but started with big dreams and one building.

At the site where it all began back in 1869, there’s a grass field and a few trees. There’s also a historical marker that tells visitors what the small piece of land is. It’s where University Hall was built, the first building at the University of Nebraska-Lincoln. It wasn’t very well-built, but was impressive-looking and lasted until 1948. It was a symbol of what the university would become.

“The beautiful, well-landscaped campus that we know today took a long time to develop.” History Nebraska associate director and editor of publications David Bristow said. “In the early days, it really was very rough. It very much looked like it was dropped down on the prairie.” 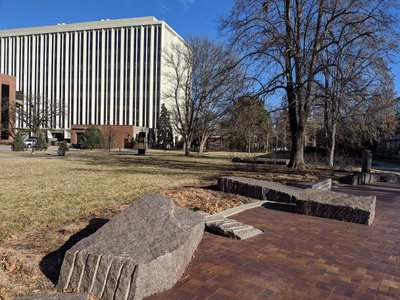 Site of the old University Hall at the University of Nebraska-Lincoln. (Photo by Jack Williams, NET News)

Lincoln was basically a village in 1869, dotted with a few cabins and tar paper shacks. The brand-new UNL campus was a four-block area dominated by University Hall, a building that was larger than the state capitol at the time and looked very out of place. It was built quickly and carelessly.

“The foundation was partly of sandstone and had to be replaced,” Bristow said. “The roof leaked. The furnace was totally inadequate. They had to add stoves in the rooms to keep the building even partly warm in the winter.”

In 1869, Nebraska really didn’t have much of a high school system at all, so to have a university emerge from the prairie was a bit of a head-scratcher for some of the state’s early residents.

“You didn’t have a lot of high school students who were ready for a college education and frankly a lot of people felt that this was unnecessary or at least premature, to build a university in a place that was still very much the frontier,” Bristow said.

Classes at UNL didn’t start until 1871 and in those early years, there weren’t many students, only 20 to start along with six faculty members. Many of the earliest students had to attend what was called the Latin School, a preparatory school to get them ready for more rigorous college-level courses. And campus life was quite a bit different then too. 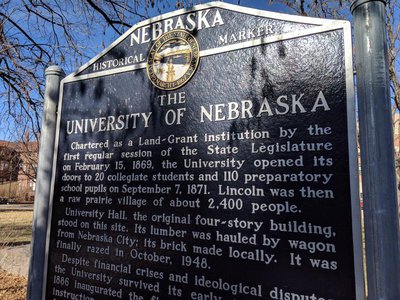 State historical marker at the site of the old University Hall in Lincoln, Nebraska. (Photo by Jack Williams, NET News.)

“The rules were a lot more strict in some ways. You were not allowed originally to drop a class without faculty approval,” he said. “You weren’t allowed to leave town without the chancellor’s approval. Now granted, there were a lot fewer students then to keep track of.”

Most of the buildings from those early days are gone or have been extensively renovated. University Hall was repaired and remodeled and eventually torn down in 1948. All that’s left is that grassy field surrounded by newer buildings.

“It’s just such a tiny piece of the overall campus now though,” UNL architecture librarian Kay Logan-Peters said. She studies the old buildings on campus. “That little original campus is not even a fourth of the downtown campus. It’s just a little fingernail of a piece compared to the greater campus, the whole campus.”

Those early years were lean, with only a couple of hundred students for most of the 1870s and 1880s. Things started to look up in the 1890s, the same time future author Willa Cather arrived on campus. Enrollment grew and the campus was made up of more than one building.

“I’m sure it was a great time to be a student here. And there was a little bit money coming in and the new library opened,” Logan-Peters said. “At least by the time Cather got here, we had four buildings or five buildings, not just one. When Roscoe Pound was a student, we had one building.” 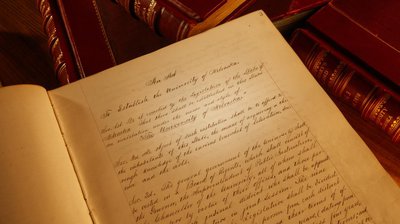 In his office not far from the site where University Hall once stood, University of Nebraska-Lincoln chancellor Ronnie Green says the early leaders at UNL, people like the first and second chancellors, Allen Benton and Edmond Burke Fairfield and Nebraska’s first governor, David Butler, would probably be impressed with what the university has become.

“If they were to come here today and think, wow, would we have ever envisioned that there would be this comprehensive university with 26,000 students and 6,300 faculty and staff across all these ranges of fields and contributing this level of research to the world, I’m sure it would blow them away,” Green said.

He’s the 20th chancellor in UNL’s history, but often looks back to the school’s early days for inspiration.

“It was a start-up time, right? Everything was new and the town was building new,” Green said. “The state was new. The state was getting its legs under it.”

He says the University of Nebraska-Lincoln is a different place now, but will always remember its humble start on a wide-open prairie 150 years ago.