Teachers who retire would have to wait before substituting or taking another teaching job, and penalties for sex trafficking would increase, under proposals advancing in the Legislature.

Retirees are living longer, and investment returns are down. So a proposal by Sen. Mark Kolterman would raise the age at which teachers can retire and get a full pension from 55 to 60, for new hires.

As originally proposed, it would also prohibit teachers from substitute teaching for 180 days after they retire. Kolterman said that was necessary to comply with Internal Revenue Service requirements for a “bona fide separation” in order for the plan to qualify for a tax exemption. “If this plan falls out of compliance, then we’ve got huge issues. The teachers will not get a tax deduction for the money they’re putting in. The employers won’t get their money. It’d be non-qualified instead of a qualified plan. And everybody will be ending up paying a lot of taxes,” Kolterman said.

Sen. Brett Lindstrom estimated there would be $133 million of taxes due on $1.9 billion worth of contributions to the plan.

Sen. Lynne Walz opposed the 180 day requirement. Walz proposed letting teachers sub up to 45 days within that time period. She said flexibility is needed to address a shortage of substitute teachers, from the state capital to the Sandhills and the Panhandle. “Lincoln Public Schools averages 12 classrooms per day where LPS cannot get a substitute. In more remote areas -- in Sen. Brewer and Sen. Erdman’s districts, schools are having to pay for mileage and even hotel rooms in some instances so they can bring subs into a severe shortage in their area. Our goal should be to fill the substitute needs with the most qualified teachers in the best interest of our students,” Walz said.

Sen. Roy Baker said it was important to make changes to preserve teachers’ defined benefit pension plans. “The good thing about this is, you know, if you’re an educator, you don’t have a business to hand off to your kids. You don’t have a farm to give to your kids. That’s (your pension) all you got,” Baker said.

After several hours of debate, lawmakers struck a tentative compromise. Sen. Matt Williams said it would reduce the time teachers would have to wait before substituting to 120 days from retirement. It would also reduce the time anyone who took an early retirement incentive plan would have to wait before taking another teaching job, from two years to 18 months. With the understanding that those changes will be offered as an amendment at the next stage of debate, senators gave the bill first round approval on a vote of 39-0.

Lawmakers also considered another proposal, aimed at toughening penalties for sex traffickers and the customers of trafficking victims. Earlier, Sen. Patty Pansing Brooks proposal ran into skepticism about how a customer would know if someone was being trafficked or was underage. An amendment adopted Friday would change the legal requirement to say a customer would have to “knowingly” violate those prohibitions, rather than merely “recklessly” do so. 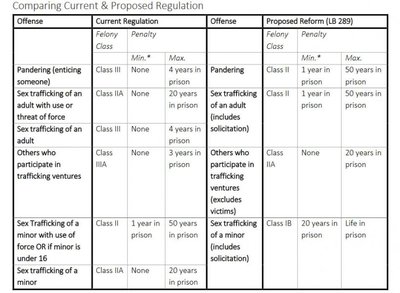 The amendment also eliminated mandatory minimum sentences. But Pansing Brooks said the legislation still has teeth. “I want to send a loud and clear message to traffickers, to purchasers, to law enforcement, to judges: We are no longer going to accept the despicable sale of human flesh for commercial profit. This is sex via force, fraud or coercion. This is it. We’re drawing a line in the sand. We expect law enforcement to understand this. And we expect the judges to understand this,” Pansing Brooks said.

For the NET documentary on sex trafficking, click here.

Senators gave the bill second-round approval on a voice vote.