After nearly a century of heavy state and federal restrictions, hemp — a close cousin of marijuana — is now legal in the U.S. It comes just in time to boost a burgeoning hemp market.

Compared to the 89 millions acres of soybean in the U.S., the hemp industry is still meager at 25,000 acres, but experts expect that will quickly change now that President Donald Trump has signed the 2018 farm bill.

That’s because after nearly a century of heavy state and federal restrictions, hemp has been removed from the list of controlled substances and reclassified as an agricultural commodity — one that a burgeoning market has its eyes on.

More than half of U.S. states already allow farmers to grow hemp, including Illinois, Indiana and Missouri. And the acreage in the U.S. increased more than 500 percent between 2015 and 2017.

In Colorado, where hemp has been legal since 2013, 36-year-old Kristen Kunau grows an acre with her husband. Come December, there’s isn’t much to see, except a mason jar of thick, dark oil that sits in the fridge. 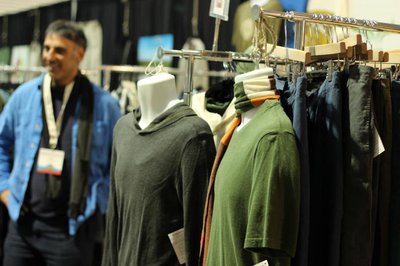 As a textile, hemp doesn't have the market share that cotton and synthetics do. But hemp T-shirts were on display at the 2018 NoCo Hemp Expo in Colorado. (Photo by Esther Honig, Harvest Public Media) 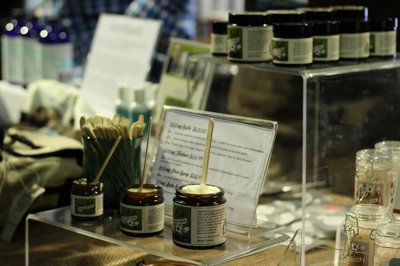 At the 2018 NoCo Hemp Expo in Colorado, vendors from across the country showcased hundreds of products made with hemp-derived CBD. (Photo by Esther Honig, Harvest Public Media)

This is CBD or cannabidiol, an oil extracted from hemp flowers. Unlike marijuana, hemp’s close relative, this contains very little THC — no more than 0.3 percent according to new federal regulations— which means ingesting hemp CBD won’t get you high.

Hemp is often talked about for its dozens of practical applications, including car parts, livestock feed and plastics. Despite the versatility, some estimates say 70 percent of the U.S. hemp crop is grown for CBD.

Hemp CBD represents a modest $600 million market, but now that it’s legal in all 50 states, experts like Jamie Schau, a senior research analyst with Brightfield Group, expect the market will grow tenfold in 2019. She said federal approval gives the industry a big boost, but consumers were already clamoring for CBD products, drawn in by their reported healing powers.

“What’s really interesting about this market is it’s grown completely from a grassroots level. There’s been no formal advertising,” she said.

CBD is used in everything from lotions to sports drinks, makeup and dog treats. But because these products occupied a legal gray area (permitted under the 2014 farm bill while still banned in the eyes of the Drug Enforcement Administration), major retailers were reluctant to sell them.

Companies like Coca-Cola are now expressing interest in CBD, and while estimates differ on how large the hemp-derived CBD market will grow in the next few years, Brightfield believes it will reach $22 billion by 2022.

Keeping pace with the research

“We don’t know that. We don’t have the clinical trial evidence to support that,” she said.

Blessing is currently involved in a study that examines if CBD can reduce alcohol use and PTSD symptoms. Recently, the FDA approved a drug that uses CBD to treat a form of epilepsy. But that’s it.

As a scientist, she calls CBD “the most promising medication that has come along in the last 50 years,” but she said all the hype has gotten a bit ahead of the research.

“The reason for that enthusiasm is from other types of evidence, like animal model studies, or small clinical trials that give us a hint at how CBD works,” she said.

She said it’s possible CBD may eventually effectively treat many conditions like substance abuse and schizophrenia. Until then, she hopes the new law will lead to increased funding for research.

The plight of small farmers

Meanwhile, hemp growers like the Kuana family are bracing for change. In Colorado, most hemp farmers run a small operation, about 10 acres; the Kunaus have just one and also have day jobs.

But with the law change, Kristen Kunau said they’ll be focusing on their business full-time. They’ll be able to access bank accounts, write off business expenses and will be able to apply for low-interest federal loans and crop insurance.

“We’ve been working our butt off for this,” she said. “It’s really exciting that [hemp's] come this far, and that this is happening in our lifetime.”

Kunau knows their plot will seem small compared to other farmers, who will sow commercial-sized plots of hemp.

This summer, the price for hemp flowers was up to $75 in Colorado, but as more hemp is planted in the country that’s expected to drop. Kunau hopes that won’t squeeze out small farms like hers.