Carrie Herrera was ready to talk.

The Herrera family remained out of the public eye in the months after their patriarch, Lincoln Police Investigator Mario Herrara, was killed in the line of duty. In August 2020, he was dispatched to assist as a Spanish language translator during an attempted arrest. The suspect shot opened fire, trying to escape. Two weeks later Investigator Herrera died with his family at his side in an Omaha hospital room. 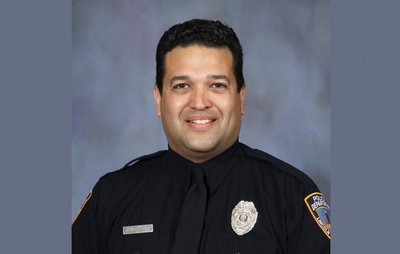 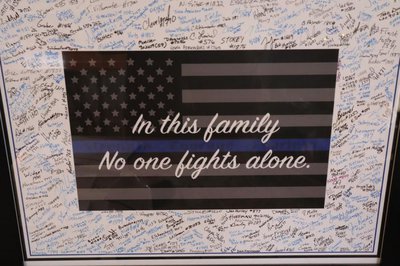 A moments presented to the Herrera family, signed by every member of the Lincoln Police Department. (Photo: Bill Kelly)

Recently the Lincoln City Council agreed to give Carrie a seat on the Police Advisory Board. The panel reviews citizen complaints about officers and department policies.

New to the public spotlight, Carrie Herrera agreed to speak with NET News about her new role in government service, the community's response to her husband's killing, and her struggles to find a balance between grief and anger.

Senior Producer Bill Kelly met with her last week in the family home, seated at the table where the family would share dinners almost every night.

In the first of this two part interview, Carrie says it is out of character to step into the public spotlight, but she felt she needed to find a way to serve in the wake of the family tragedy.

Carrie Herrera: A friend approached me and said, 'would you consider this? Would you think about doing something like this?' Because I had talked about before that, I've changed. My whole outlook on public life has changed. And I want to do good. I want to help. I want to help the city.

Bill Kelly, NET News: I'm assuming you're someone who wanted to do good before. What's the change?

(Mayor Lerion Gaylor Baird appointed Carrie Herrera. The nine-member board reviews complaints from citizens about the conduct of police officers. After hearing from the officer and the citizen involved, the board may recommend disciplinary action or policy changes.)

Kelly: What do you understand your role to be?

Herrera: I understand my role is to go in, have a very clear, unbiased opinion. Have the facts presented to us. Look over policy to see if an officer either didn't follow a policy or did follow policy and then go from there with it.

Kelly: There were some people who expressed concerns about your objectivity.

Herrera: Correct. Correct. And I can absolutely see where they're coming from with that. But I think part of it is that I've been a citizen in Lincoln, Nebraska, my entire life, I love the city. I'm really just going to make decisions and help make decisions that are going to benefit the city. I've said all along, just because an officer has a complaint against them doesn't automatically make them guilty of something they've done.

But on the other hand, just because they're an officer doesn't make them that they didn't do it. Does that make sense? If an officer does something wrong, they absolutely should be held accountable without a doubt.

(The Herrera family had first-hand experience with the Police Advisory Board. Following an investigation of a sexual assault, Mario Herrera concluded the woman who reported the incident had not been truthful. No charges were filed.)

Herrera: She went on to (file a)complaint about it that Mario didn't do his job right. And he did. So, she just wasn't happy with the outcome of what he found out. I saw how my husband was presented with everything, how he was trying to prepare himself to go to this board. He was scared nervous, but then the board reviewed it and realized that he completely went by policy, doing what he was supposed to do. It was dismissed. Being an officer's wife for 23 years, that going into it, I can see both sides.

Kelly: So, this is a particularly interesting time to be on this board. Because opinions about the police are polarized, did that give you pause as to whether you wanted to take this on?

Kelly: At the same time, especially people of color have established, in a lot of cases, that there is reason to distrust the police or they've had bad experiences with the police. Tell me about your open-mindedness when those types of cases perhaps are presented?

Herrera: I guess probably one being married to Hispanic as well. I don't I honestly don't look at color. I don't think you should ever, I mean, but I understand where they're coming from with that. And I think that's where you need to when a case is presented to us. We need to get the facts, read through the policies, to make sure that that officer went by policy or didn't go by policy and then go from there.

Kelly: As a Hispanic law enforcement officer, did Mario talk about times when he had experienced discrimination either out in the field or even within law enforcement

Herrera: He definitely has. I mean. I think it's part of our culture. I hate to say that, but it is. He's actually told my kids that it is part of things. People will make jokes (and) make remarks. I think Mario was amazing at just rolling it off, because he's probably dealt with it. He grew up in a small town in Missouri that it's you know, being a family there Hispanic family was a little out of out of character there in Missouri. So he definitely dealt with that at times. Absolutely.

Kelly: I mentioned family issues. It's very possible on an informal level that you will be consulted, or you'll be approached by the department or families or their spouses within the department who have faced somebody being injured or even another loss of life. How do you handle giving them support?

Herrera: There's no process of grief. There's no process of support after you lose a loved one. And I think what we did as our eyes our family did, we still are actually we don't we're not focusing on how this happened to Mario. We're not focusing on that he was killed in the line of duty. We're focusing on that he's gone, that he's not with us anymore. Not saying that that won't come, that we eventually come to the maybe anger. I'd probably explain to them that you really have to focus on losing your loved one, not how it happened. As some people have said, he was murdered. But we've never looked at it like that we've dealt with we've tried to just really say that. Mario's gone. We're trying to deal with our loss right now.

I think part of what may be helping is I have the police department behind me helping me in so many ways. They're dealing with that aspect of it and we are dealing with grieving, trying to grieve.

Kelly: What made Mario a good police officer?

Herrera: I honestly think he was absolutely a rule follower without a doubt. And he was he had a lot of compassion. He did. A lot of the stories he would always come home and talk about was about kids. The kids. He had compassion for it. He felt sorry for every little kid that he had to deal with that either had a bad upbringing or a bad home life. That's probably what makes it really hard is a kid did this to him. Mario would have turned around and helped that kid in a heartbeat. And so that's probably what makes us the hardest.

(A seventeen year old has been charged with the murder of Investigator Herrera. Tomorrow, in the second part of my conversation with Carrie Herrera, she talks about the support she received from the community and her husband's fight to survive. )

Editor's Note: Segments of the interview were edited and the sequence of questions altered for the sake of brevity and clarity.