The proposed Keystone XL oil pipeline has generated lots of controversy in Nebraska, where opponents have succeeded in delaying a decision by the federal government. But even if the pipeline is ultimately rejected, the same oil might be coming through the state anyway – by rail.

On a recent steamy spring afternoon in Fremont, drivers were hustling across the Burlington Northern Santa Fe railroad tracks on West 23rd Street, when all of sudden, traffic came to a halt. As the rail crossing bells clanged, the driver sounded the horn on the burly engine. This time, it was a coal train. But increasingly, says Bill Pook, emergency services director for Dodge, Burt and Washington Counties, “we see a lots of oil tankers coming through.” 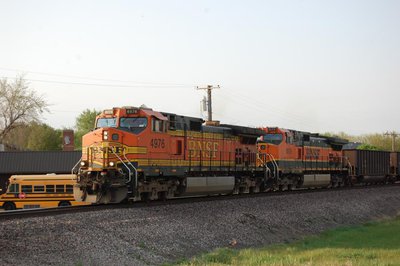 Nationwide, according to the Congressional Research Service, shipments of oil by rail have increased from fewer than 10,000 carloads in 2008 to an expected 650,000 this year. Those shipments have come under increasing scrutiny because of incidents like a derailment in Quebec last year that caused a fire and explosions that killed 47 people.

That was volatile light crude from the Bakken field in North Dakota. But if President Obama rejects the proposed Keystone XL pipeline, a State Department environmental impact statement said, additional shipments of heavy crude from the oil sands of Alberta, Canada destined for refineries on the Texas Gulf Coast could be added to the mix.

That’s not surprising, according to Brigham McCown, a pro-pipeline consultant.

“Inevitably the oil will not stay in the ground. It will get to market. So it’s just a matter of how it’s going to get there. The presidential permit is only required on new infrastructure, so there’s nothing keeping Canadian oil from crossing the border – being trucked across or being put on an existing rail line,” McCown said.

Oil sands -- or tar sands – oil, poses its own risks, as shown by a 2010 pipeline rupture that polluted Michigan’s Kalamazoo River for nearly 40 miles. If Keystone XL is rejected, the State Department report said, 12 to 14 trains per day of 100 cars each carrying the heavy crude could enter Nebraska on the BNSF line at South Sioux City, come south through Fremont to Ashland, then head east, leaving the state at Plattsmouth.

Burlington Northern Santa Fe spokeswoman Roxanne Butler declined comment on what the line through Fremont carries now, or could carry in the future.

McCown, who headed the Pipeline and Hazardous Materials Safety Administration or PHMSA under President George W. Bush, says it’s safer to move oil by pipeline than by rail – a claim challenged by the Association of American Railroads. According to Joe Delcambre of PHMSA, in 2013, 99.9 percent of all train cars carrying crude oil in the U.S. reached their destination without incident.

Jane Kleeb of the anti-pipeline group Bold Nebraska rejects the argument that if the pipeline is turned down, the oil will move anyway, by rail.

“TransCanada and a few other tar sands companies continue to use this kind of threat lingering out there that if it doesn’t go by pipeline it will go by rail. And there’s just no proof to actually back up that claim,” Kleeb said.

Kleeb says the higher cost of rail shipping will make oil from the sands of Alberta uncompetitive. The State Department report says costs would be higher, but not so high as to curtail production.

At a recent campaign event, Fremont resident Arnold Lessig questioned why pipeline opponents are not more upset about shipments of oil by rail.

“I see Burlington Northern trains going out. They’re a mile long, everyone’s a tanker car – going over the Platte River bridge, heading south. I don’t see Jane Kleeb standing out waving a sign when they go by. They complain about the pipeline being dangerous but to me, those trains are just as dangerous,” he said, adding if an accident would occur, the train and its cargo would “be in the Platte River right there.”

Kleeb says communities are right to be concerned about oil shipments, whether by rail or pipeline. But she says instead of calling out protesters, they should put pressure on state officials for better regulation and more training to deal with potential accidents.

Even if shipping oil by pipeline is cheaper and safer than by rail, that’s no reason to approve it, argues Daniel Botkin, emeritus professor of environmental studies at the University of California Santa Barbara.

"The pipeline itself is not the issue. It’s the source of energy which is not needed right now by the United States or the world. It’s the dirtiest form of energy and so just to say, ‘Well, it’s going to happen anyway,’ that’s not a rationale to help it,” he said, warning of environmental threats to land and water from strip mining the oil sands in Alberta.

Back in Fremont, emergency services director Bill Pook estimates there are already 50 trains a day carrying all sorts of materials – some of them hazardous -- through town. Pook says he doesn’t know what the effect of adding a dozen oil trains would be.

“Right now, we can’t comprehend anything that’s going to be so much greater than what we’re already handling. I guess the proof would have to be something that’s felt, instead of on paper,” he said.

That proof, if it comes, may depend on the decision about the pipeline, which isn’t expected until after the November election.