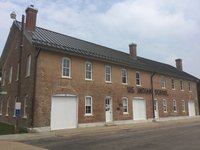 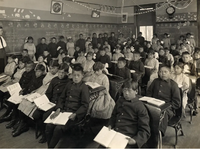 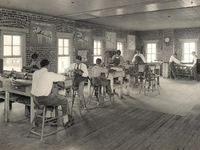 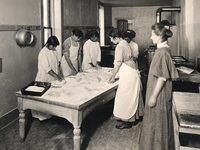 The discovery of hundreds of graves at residential schools for indigenous children in Canada has prompted new attention to similar schools in this country, like the former Genoa Indian School in Nebraska.

In a semi-darkened room inside a red brick, century-old building, half a dozen people sit quietly watching a slide show describing the Genoa Indian School.

“The Genoa school was one of the largest, and longest-lived, of the federal boarding schools. It was also noted for its numerous and quality facilities, including a gymnasium with an elevated indoor track,” the narrator says.

The slide show is being held in the old industrial manual training building of the school, which operated between 1866 and 1934. Here, and in about 30 other buildings, students lived and were taught everything from academics and carpentry to tailoring and harness making. Over the years, enrollment varied between 70 and 600 students from more than 40 tribes, from Maine to California.

The slide show mentions what happened when they got to Genoa, about 20 miles west of Columbus. “Upon arrival, the students were forced to have their hair cut and give up their native dress and language,” the narrator says.

The schools were part of an effort at forced cultural assimilation said Judi gaiashkibos, executive director of the Nebraska Commission on Indian Affairs, whose heritage is Ponca and Santee Sioux.

“Everything you were was considered of no value. So we have to destroy that. And we have to then reprogram you to become a cookie-cutter American and deny your identity, gaiashkibos said.

That effort was encapsulated in the slogan “Kill the Indian, save the man.” But sometimes, neither was spared.

In late May, officials announced the discovery of about 200 unmarked graves at a former school in Kamloops, British Columbia. In June, U.S. Secretary of the Interior Deb Haaland, herself a Native American, announced an investigation into deaths at the more than 350 U.S. residential schools. A few days later, another discovery of 751 unmarked graves was announced in Saskatchewan. A 2015 Canadian government report discussed thousands of deaths at that country’s residential schools, caused by disease, fire, or attempts to run away.

At Genoa, the legacy is not all grim. In fact Nancy Carlson, a volunteer at the school museum, said in the late 1980s, people visiting the town expressed a desire to get together to remember.

“We were having former students come in and they were saying ‘You know, every other school can have a reunion, why can’t we?’ And we thought ‘Well, why not?’” Carlson said.

That began an annual tradition that continues to this day, with reunions of people who went to the school and their descendants. Carlson said people show a wide range of reactions.

“I remember one little lady from South Dakota she came and she started to cry when she was here and I said ‘Well, I’m sorry,’ and she’s no, it’s just that she had such good memories of here that to have most of it gone really bothered her. She said she really liked it. I’ve had other people come and say, ‘Well, maybe we should just burn this place down,’ and so well, I mean, I can understand that feeling,” she said.

Gaiashkibos’s own mother went to the school in Genoa, and gaiaskibos said she understands why former students would talk about positive memories.

“She only told me the positive sides. She was in the band, and she did the baking. She didn’t tell me about abuse, violence. But there was. I know there was. I know they were hungry – she did talk about that. There was never enough to eat. My two aunts went to school there but they were separated. They couldn’t sleep in the same dorm room, etc., because they would have the language. And to kill the Indian you had to separate them to destroy the language,” she said.

Some students are known to have died at the school – a plaque in the museum lists the names of 19. And there was a cemetery at the school. An old plat map shows one near the buildings, but it may have been bulldozed for a construction project after the school closed. Carlson said the new search may help find it.

“The federal government, with its initiative that’s come out, is supposed to provide us with ground-penetrating radar and search records so that we can pinpoint where it is,” she said.

That could be difficult. Haaland wants the investigation of boarding school deaths to be finished by April of next year. But Matt Reed, historic preservation officer for the Pawnee Nation in Oklahoma, has been using ground penetrating radar for three years, looking for unmarked tribal and family graves not connected to schools.

Reed said there was a school in Oklahoma where people are said to be buried, but the grounds spread out over 400 acres.

“If I do a 3-D scan with this GPR, it’s this real complex grid system that I have to set up that’s basically 100 square feet. And it’ll pretty much take me half a day, at least half a day, to get that all set up. And so it’s like 400 acres, well, where do I start?” Reed said.

The Genoa school grounds at one point contained 640 acres, although much of that was later sold off to private homeowners.

Gaiashkibos says however long it takes, the search can help people heal, by uncovering the truth.

“The past is painful. But we can learn from the past. And I don’t want people to feel – make everyone feel shame and pity for us -- because we’re not pitiful. We’re resilient, strong people. My mother surviving is testimony to that, and me sitting here talking to you. So, I think we can learn from that and try to do better,” she said.