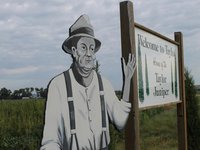 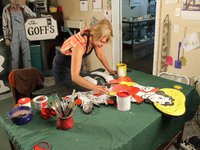 The population of the small central Nebraska village of Taylor is growing. Sort of. Meet the villagers of Taylor, and the woman who put them there.

The villagers of Taylor are everywhere. Ralph Hodson waves to travelers on Highway 183 just south of the town. Herbert and Alice have picked up a package and are about to cross the street near the landmark Pavillion Hotel. Poles on their shoulders, a couple boys head to their favorite fishing hole.

CLICK HERE to watch a story on the Taylor Villagers from a February 2016 episode of NET Television's "Nebraska Stories." 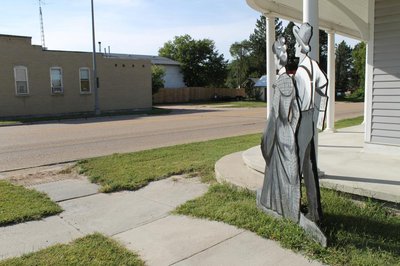 "Herbert and Alice" were the first villagers Sandoz created in 2003. Why are the villager cutouts created for Taylor black and white? "We went with black and white because it mimics that black and white film era, so it looked like it was from the past," Sandoz said. (all photos by Mike Tobias, NET News) 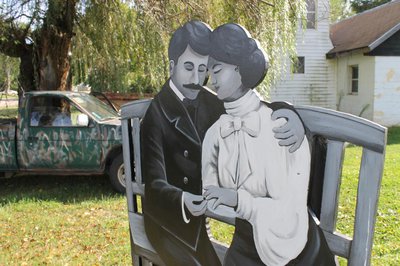 "Charles and Louise" reside in the yard of Mary Ellen and John Shunneson. "It just kind of feels like me and my husband," Mary Ellen says of the villager couple. 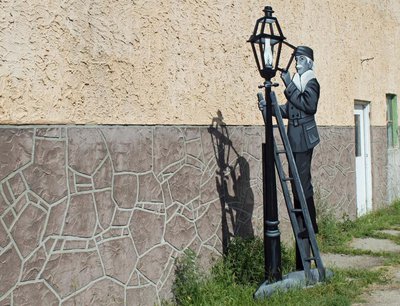 Sandoz called "Clarence the Lamplighter" one of her favorite creations. "The thought of actually seeing somebody going around and lighting the lamps...romantic era," Sandoz explained. 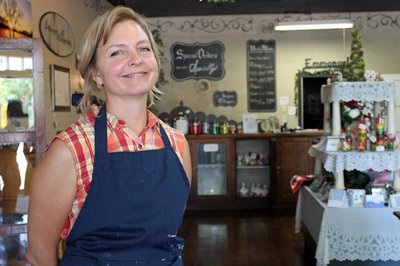 "I never set out to make a name for myself as an artist," Marah Sandoz said.

Taylor will get a lot of traffic Sept. 25-27, because the town is part of the route for the annual Nebraska Junk Jaunt. More information on this 300 mile continuous yard sale HERE.

But there’s something a little different about these friendly but quiet folks. They’re a little stiff. Wooden. As in made of wood.

“I want as many wooden people as there are actual people in Taylor, which is only 182,” said Marah Sandoz, one of the actual people and creator of the wooden ones.

Her name begs the question; and yes, her husband is related to Nebraska-born writer Mari Sandoz. It was her husband’s teaching job that brought Marah to Taylor. A couple decades ago she got involved with a local economic development group brainstorming about ways to help the fading village, which sits on the edge of the Sandhills near Calamus Reservoir. Were there ways to use the history (in the form two buildings; the historic, but closed Pavilion Hotel and a former filling station turned visitors center) and the two state highways that intersect here to Taylor’s advantage?

“What can we do to stop the traffic,” Sandoz said. “What can we create for people to see. Photo opportunities. So we went back to, okay what do we have. We have a couple really cool historic buildings. Let's go back and capitalize on that. Let's go back to that era and let's recreate what was (here) when this town was booming, when this town was bustling. What did it look like. Let's put those windows, let’s put those glimpses into the past back in place.”

It became Sandoz’s project. A self-described self-trained artist with experience using wood and paint, she hatched the idea of life-sized plywood cutouts depicting people who might have lived in the village between 1890 and 1920, the boom years when Taylor had twice as many people as its current population of less than 200. The first two villagers were put on display in 2003…”Herbert and Alice” near the old hotel, and “Ralph and Hank” chatting by the visitors center.

“People thought they were fun,” Sandoz said. “They were different. People said that they had to stop and wait because they thought the people wanted to cross the street. They waved at them. It created a lot of local chatter.”

The villager population has since grown to about 100 of the black and white cut-outs. Sandoz does most of the work, with a little help from family and local people. The village development group and sponsoring organizations pay for the supplies, she donates her time.

A few depict real people, like farmer Ralph Hodson standing on his plot of ground on the edge of town. But location is often a starting point for the artist.

“A lot of my ideas come from seeing a spot,” Sandoz said. “I tend to see canvases in the community. What would have been happening there in 1910.”

Places like the yard of Mary Ellen and John Shunneson, which includes a sprawling old weeping willow. Underneath the tree villager Charles sits on a bench with his arm around Louise, slipping a ring on her finger. Does it attract visitors?

“Oh yes. Yes, yes, yes, they stop,” Mary Ellen Shunneson answered. “Come up, take their pictures, write things down. I think they make the circuit and try and see every one of them.”

The villagers caused westbound travelers Joseph Kaup of Snyder and Paul Ignowski of Norfolk to stop in Taylor. By convenient accident they walked into a shop on the town square called Marah’s Treasures, and asked about “the story behind the wooden people.”

“First reaction, we thought it was real, just kind of somebody standing there you know,” Kaup said later, laughing.

“It’s kind of an inviting look to it you know,” Ignowski added. “It makes you want to find out more about it. Actually we’re thrilled that we stopped here (in Marah Sandoz’s shop) and to find out this is where they’re being made and a little bit about the villagers, as they call them.”

“People are actually coming up,” Sandoz said. “Ladies groups are coming up for day trips. Car clubs are coming up just to drive around Taylor. It gives them a destination point, and then they eat at the restaurant and they buy gas at the gas station, and you’ve begun to bring revenue into your town.”

But right now there’s only so much revenue the villagers can generate for Taylor, because there aren’t a lot of places to spend money. The handful of businesses are what you’d expect to find in the only town in one of the state’s least-populated counties, and that population has been declining for decades. Sandoz believes the direction set by the villagers project can change things.

“We're creating a really positive climate for antique and retro stuff and so we feel we can get some other little businesses around the square that can fill those tourism niches,” Sandoz said.

For now, Sandoz will keep doing her part by creating more villagers. Six a year, until there’s enough wooden people to symbolically double the population. All with the hope that a village full of Clarence the lamplighter and others from a century ago can bring vitality and more real people back to Taylor.