Can fewer books on the shelf improve Nebraska libraries? 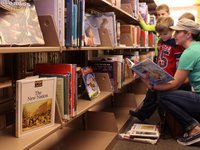 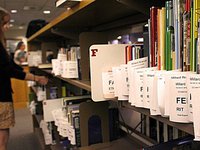 What about the books?

Librarians across Nebraska hear versions of that question almost every day as more and more readers use electronic devices to obtain, share, read, and store their books and magazines. 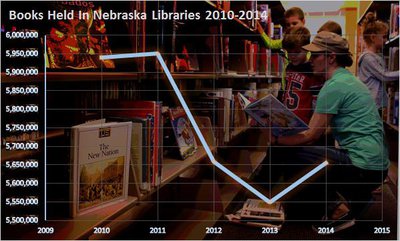 It is a passionate topic for librarians like Rossella Tesch of the Chadron Public Library who maintains, “Books are life!”

Even for the most ardent librarian, there is a growing recognition, “libraries are no longer just about books.”

Deciding the form and availability of books provides a challenge for the state’s public libraries. “It doesn't terrify me. I find it exciting,” said Laura Marlane, the new executive director of the Omaha Public Library System. “We figure out how we do this in a new environment. It's what libraries have always done.” 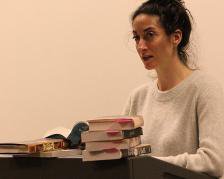 We asked popular young-adult author Lauren Oliver about the role of libraries in her life.

"It was hugely important. Some of my earliest pleasurable memories involve afternoons with my mom. After kindergarten was over we’d go to the library and sit outside and read books together. The anxiety of when to return the book and whether you were overdue forms a seminal part of my childhood memories.

Libraries are the democratization of the book. Libraries give access to people who otherwise would not be able to read. Period. And the truth is that books are quite expensive for a lot of people.

Libraries critically give access to a world of ideas and creativity and imagination that is supposed to be at the base of what we can provide people in this country."

Books will, in the opinion of library patrons surveyed nationally and library experts interviewed, continue to play a central role in the institution’s importance to communities.

Marlane says she has not “talked to any librarians here who think books are going to go away completely.” Marlane does believe collections held by public libraries “might not be as big as they used to be.”

In the past year, public libraries in Nebraska collectively added more books to their shelves, but the general trend for the past ten years has been to reduce to the number of printed materials made available to patrons.

Fewer books are found on the shelves of the 12 library branches in Omaha. At the end of the 2014 fiscal year, the system had 582,737 books and periodicals available for checkout compared to 807,607 in 2010, nearly a 30 percent drop in printed materials.

If that sounds dire, changing opportunities provided libraries implementing new methods to deliver reading materials electronically, according to Becky Pasco, the director of the Library Science program at the University of Nebraska at Omaha.

“I love books and they'll always be at the heart of libraries,” Pasco believes, “but customizing your collection to meet the needs of the citizens is really the direction we need to go.”

She adds libraries need to recognize “more is not always better” when considering traditional print materials in a digital world.

Recently librarians have started using “targeted collection development” to make sure their materials are of greatest value to their patrons. For example, areas surrounding a library branch may be home for concentrations of senior citizens, or Latino families, or be the location of a specific historic legacy. In those cases, a library might tailor the collection of books it holds on to or purchases to meet those niche interests.

Pasco sees Nebraska libraries diversifying the printed materials on hand for patrons. “Collections have morphed any number of ways and we're better for it.”

Changes in how libraries deliver information and literature may have only increased the public’s desire to use libraries. The number of library cardholders has increased, adding 40,000 registered borrowers in one year, according to the Nebraska Library Commission’s 2014 figures.

(Click to view a summary of library trends in Nebraska)

“While print circulation drops it's not dropping a lot and it's certainly not bottoming out,” Marlane said. “There's always a balance. Is a public library supposed to be an archive or repository or is that valuable real estate on every shelf that should be moving every day?”

In 2011 a group charged with developing a strategic plan for the Omaha libraries said it was time for the system to look “beyond books” to offering materials and programs with new technologies in mind.

Marlane views it as a “balancing act” which libraries considered long before the seismic shift of digital access. She says it’s still a matter of deciding what materials are of greatest value to specific communities and neighborhoods and making them available in the most effective manner. 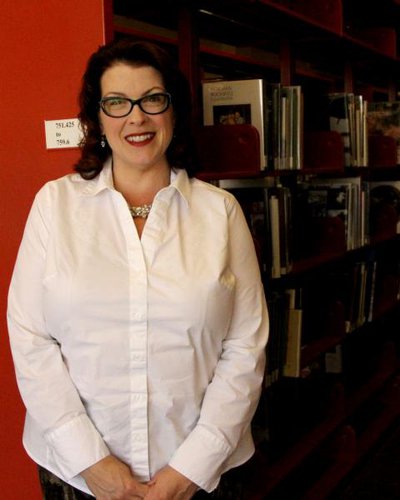 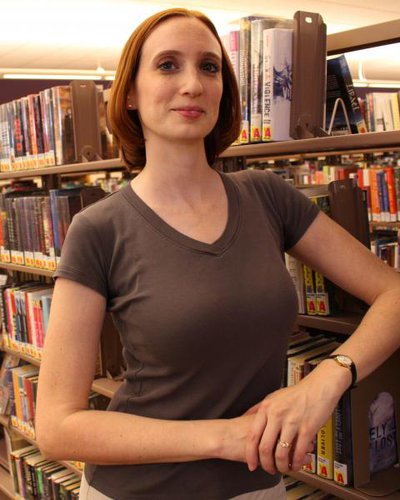 “I just have faith in the librarians as a profession and making those decisions as we move forward into new formats,” Marlane said.

A national survey assessing how Americans use and value public libraries revealed many patrons embrace new thinking about libraries. In its study "Libraries at the Crossroads," the Pew Research Center found 70 percent of those questioned agreed libraries should ‘definitely” or “at least consider” reducing the amount of space dedicated to shelves of books and other print materials in order to free up space for use by the community.

“It has to do with people wanting the core functions of libraries to remain strong while expecting libraries to pivot towards the future,” said John Horrigan, the chief researcher on the Pew study. “The data suggests that people are understanding that with the advent of technology and e-books libraries can put those spaces to other uses such as having areas for community collaboration.”

Those collaborations, ranging from librarians providing research and facilitating discussions on community issues to Lego classes for kids, may also drive readers to check out books more often.

Seward Memorial Library director Becky Baker says her staff is “buying more new books than we used to.” Not only does she credit programs that bring more visitors into the building itself but “the advent of the e-books has only increased our print demand for titles.”

She agrees on the surface “that doesn't seem to make sense, but it's really what is happening here.” Data from the state library commission shows libraries in Nebraska did spend more on print materials in 2014 than they had in the previous year.

The trend still favors increased use of new technology for reading.

In just three years, Nebraska libraries reported an 80 percent increase in the circulation of books delivered to digital reading devices.

One hundred and seventy-one Nebraska libraries share a statewide digital book collection known as OverDrive in an effort to reduce the cost.

Comparing print acquisitions with spending on digital materials gets complicated because libraries are often not purchasing a digital file for its permanent collection but a license to keep particular books in circulation for a specific period.

Easy electronic access does not always mean equal access. One of the great glories of American public libraries is making books available to everyone whether they are rich or poor. Replacing print with digital books risks cutting off access to some volumes to those who cannot afford or, because of a disability, use a store-bought reading device.

In an attempt to make e-books available to as many readers as possible some libraries purchased digital readers available for checkout.

Thousands of children and teenage readers still come to Nebraska libraries in search of traditional-form books in spite of their infatuation of all things electronic. 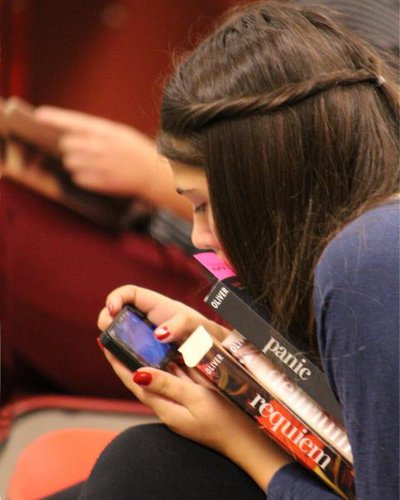 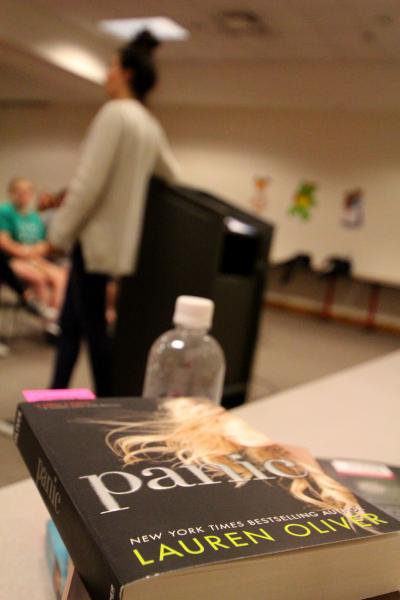 Lauren Oliver talks to a group a the Millard branch of the Omaha Public Library. 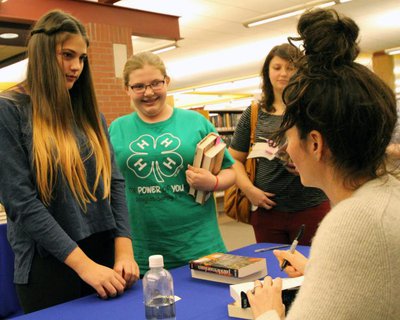 "Fan Girl" Averi Humble of Omaha (left) gets her copy of the new Lauren Oliver autographed by the author. (Photos by Bill Kelly, NET News)

Julie Humphrey, the youth services director for the Omaha Public Libraries, says we will never see demand for kids and young adult fiction “drop down to nothing (with) just a handful of books on the shelf.”

Working with young book enthusiasts and their parents, Humphrey finds “kids really like the physical touching of a book, the action of turning a page.”

“You get that a little bit when you're flipping a page on an app but waving your finger is not nearly as fun as flipping a whole page and seeing a whole a whole piece of art come to life in a in a picture book,” Humphrey said.

Humphrey reviewed data collected on library material usage of children and young adult materials in Omaha and found “from January through July, about five percent of our circulation of youth items was digital. Only five percent.” Even working with kids at the library almost daily, Humphrey even found the numbers surprising. Of the items checked out for children, “95 percent was print material.”

The demand for children’s and young adult paper library books may be driven by something very practical. In many homes, there are a limited number of electronic readers available. Parents likely get first dibs in addition to placing time limits on the kids use.

“I think every generation predicted the death of the book because of new forms of entertainment,” Oliver said. “Certainly when the TV was invented they thought nobody is reading anymore” but the skeptics, she was pleased to state were wrong “so it still keeps trucking on.”

Enthusiastic Oliver fans like Averi Humble of Omaha (she considers Lauren Oliver to be her fantasy mom), find the appeal of the print book to be both emotional and practical. The Buffett Middle School eighth-grader came to the author’s reading and book signing with three new copies of books she had read from library copies.

Her appetite for library books seems unquenchable. Asked what she is reading, Averi launches into a list.

“In the last 12 months, this includes the Harry Potter series. All of the Percy Jackson series. ‘Delirium’, and all that stuff,” she says breathlessly. Pausing because there are too many titles to remember, the girl laughs and summarizes with “a lot.”

The practical side of her need for physical books comes from her difficult relationship with her Kindle e-reader.

“I do like a book more than a digital copy,” she explains. “I have a Kindle but I like reading the (hard) copies because normally I'm just like too lazy to charge it.”

While waiting in line for an autograph, Averi, the self-described “fan-girl,” shared one final advantage of a hard copy book. “If it was on a tablet I would not have gotten this signed,” she said with a big smile, brandishing her fresh new copy of “Delirium” with crisp paper pages and a shiny cover.