The Nebraska Legislature remained stuck over abortion language in the state budget Friday; while a proposed scholarship program to help students go to private school appears dead for this year.

It was the second time this week senators tried to advance the budget. Once again, the sticking point was language proposed by Gov. Pete Ricketts involving federal family planning funds. Those amount to less than $2 million --and no state funds -- in an overall budget of nearly $4.5 billion. Ricketts wants language prohibiting any funds from going to organizations that perform or refer for abortion.

Sen. John Stinner, chairman of the budget-writing Appropriations Committee, pleaded with his colleagues to act, or lose control. “We really do need to pass this budget (or) lots of bad things happen. And the further on we go, the more emboldened people get in their positions,” Stinner said. “My fears are that we end up at the end of the session, and then the governor will dictate what we look at in a special session.

Stinner said if the budget is not passed, money could run out for needs like payments to foster care parents and agencies starting in May.

Sen. John Murante took a very different view, blaming opponents of the budget language for “the devastation that will be done by the reckless, irresponsible political maneuvering that we are seeing on the (legislative) floor right now.”

When Stinner tried to invoke cloture, to cut off debate and vote on advancing the budget, senators opposed to Ricketts’ abortion language resisted, and Stinner’s motion fell two votes short of the 33 it needed to succeed. 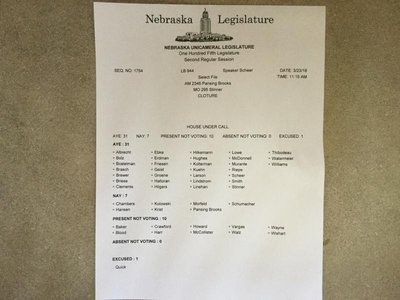 This was the cloture vote on the budget.

Afterwards, an angry Sen. Jim Scheer, speaker of the Legislature, chastised senators, saying some who promised votes for cloture had reneged. “Why am I upset? Because I was lied to. And when somebody doesn’t keep their word that’s lying to me. I expect you to keep your word when you tell me something,” Scheer said. “Why am I upset? Because we just spent another two hours (debating) when we have tons of bills that have not seen the light of day…They’re yours. Quit asking me when they’re gonna come up if we’re gonna keep pulling this crap.”

Sens. John McCollister and Burke Harr said they told Scheer they would vote for cloture, but did not. McCollister said he had been told Scheer was going to schedule the bill for debate anyway, calling the situation a misunderstanding. Harr said he wanted both sides to continue negotiating.

Scheer said senators would negotiate over the weekend, and he hoped to debate compromise language next week. For his part, Ricketts criticized senators who voted against cloture, accusing them of putting vital state services for children at risk.

Also Friday, senators bogged down over a proposal that would have given tax credits to people who contributed scholarship money for children to go to private schools.

Supporters said the proposal would give children from poor families more choice; opponents said it would undermine public schools. After lawmakers adjourned without reaching a vote, Sen. Jim Smith, sponsor of the bill, said it didn’t appear to have enough votes to overcome a filibuster.