Nebraska lawmakers gave final approval to the next two-year budget, despite some senators’ warnings the plan would not work. And a proposal to let voters decide on requiring voter IDs died in the face of strong opposition.

Lawmakers held a final round of debate Tuesday before voting on the budget for the next two years. It was divided into several bills, each of which required a two-thirds majority – 33 votes – to take effect in time for the start of the new fiscal year July 1. After one passed with only 32, Sen. John Stinner, chairman of the budget-writing Appropriations committee, said he was struggling with his feelings. “There’s a little anger, a lot of disgust, a lot of frustration,” Stinner said. “You people had better wake up. You’ve got to be accountable. If you wanted to shut this government down, those folks that didn’t vote for this, I want you to stand up in front of the Capitol and tell every employee – 13,000 of them – why they’re not going to get paid. Then you go home. Tell your schools. Tell your nursing homes. Tell your DD (developmental disabilities) people they’re not going to get a check. They’ll think you’re really a responsible group because all you want to do is cut.”

Sen. Dan Hughes, who voted against the bill, said he didn’t want to shut the government down. But Hughes said he had a question for Appropriations Committee members. “You sat and listened to everybody who wanted money – everybody who needs money to run the operations of the state. And there are legitimate needs – there’s no question about that. But did you hear from anybody who is paying the bill, the taxpayers of the state of Nebraska?”

Sen. Curt Friesen who also voted against the bill objected that the budget is still growing, despite falling revenue projections. “If we want to talk about responsible, let’s talk about responsible spending. When you have a $900 million shortfall, you don’t increase spending by 1 percent. You cut spending,” Friesen said.

Through cuts in some areas, dipping into the cash reserve, and lowering budget reserve requirements, the shortfall is projected to go away, and the budget is projected to balance. But critics warned if expected tax revenues don’t materialize, the state could face sharper cuts or a tax increase later. Amendments were offered to freeze spending at last year’s level, and to cut spending across the board by 1 percent. But they were withdrawn for lack of support.

Speaker Jim Scheer said senators appeared to be playing a game of chicken by not passing the budget with enough votes. “The only reason we are here in this session… is to pass the budget. Everything else was a peripheral. This is your job. Do it!” Scheer said. 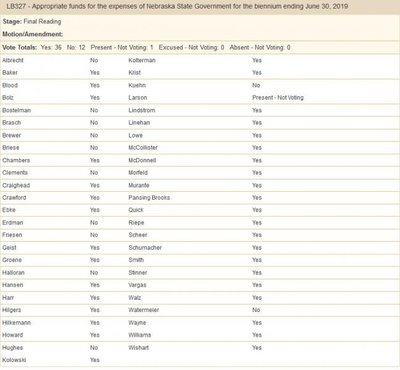 This is how senators voted on the main budget bill (Source: Nebraska Legislature)

Senators reconsidered their vote and advanced the budget bills with enough votes to take effect immediately. The bills now go to Gov. Pete Ricketts, who can cut spending using his line item veto. Senators would then have one last chance to override any vetoes.

Tuesday afternoon, senators considered a proposal by Sen. John Murante to have Nebraskans vote on requiring a photo ID to vote in an election. Murante acknowledged some such laws have been used to suppress minority turnout. But he said he could work with opponents to craft workable legislation. “I believe that despite that historical context, Sen. Wayne, Sen. Morfeld and I could sit down in a room and come up with a way to do this bill which the overwhelming majority of our constituents support in a way that we are confident that we are a) defending the integrity of our elections and b) doing so without disenfranchising a single voter,” Murante said.

Sen. Ernie Chambers adamantly opposed the proposal. “This is serious for black people. Black people have died by trying to register to vote. And you white people gonna sit here and play with it? Not with this man,” Chambers said.

After a little more than an hour, a vote to cut off debate fell short, dooming the measure for this year. 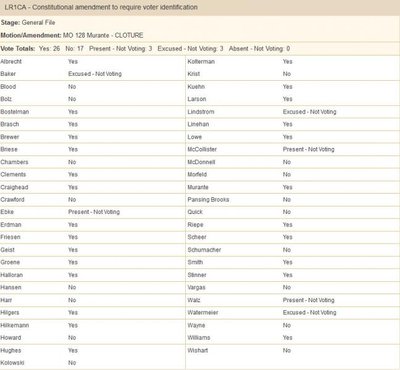 Vote on voter ID ('Yes' vote was to keep it alive)

And in other legislative news, Speaker Scheer said he is moving up the scheduled end of the legislative session to May 23. The session had tentatively been scheduled to end June 2.