BLM Protest Planned for West Omaha: "We Can't Stop Marching; We Don't Have a Choice" 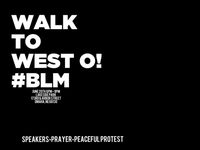 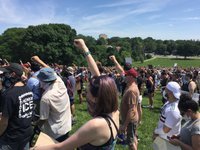 A planned march and protest in West Omaha on Saturday aims to broaden the Black Lives Matter movement and keep its message in the public awareness.

Black Lives Matter protests have been scheduled across the state for the past few weeks, including large gatherings in Omaha and Lincoln.

Wellesley Michael helped plan Saturday's event in West Omaha. She said most protests have been downtown, and it’s important to have these conversations in every community.

"I think we had no idea it was going to be this big," Michael said. "It was kind of just a group of friends and family that got together and said, 'Hey we live west and we’re Black, we live out here, we want you to know that we matter wherever we are.'"

More than a thousand people have shown interest in the event on Facebook.

The group will gather at Lakeside Hills Park at 6 p.m. for a rally with speakers. Then the protesters will march to 175th and West Center.

Michael says they’re demanding justice for James Scurlock, a young black man shot and killed by a white business owner during a Black Lives Matter protest on May 30 in downtown Omaha.

Douglas County Attorney Don Kleine chose not to press charges against the shooter, Jake Gardner, but called for a grand jury to review the case.

"Our big goal is to not let James Scurlock ever be forgotten," Michael said. "How he was fighting for Black Lives Matter in that movement as well."

"We’re not going away. We want justice and not only do we want it, but it’s something we deserve," Michael said. "All of these giant protests, everyone getting together in such big groups, is really what’s making these conversations start to happen. So we can’t stop protesting, we can’t stop walking, we can’t stop marching. We don’t have a choice."