Bikes, Coffee and Help for Young Nebraskans Aging Out of Foster Care 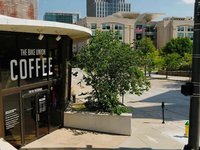 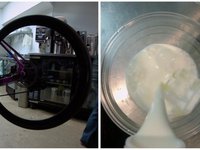 Young people aging out of foster care face challenges. An Omaha business is trying to change that, as NET Television producer Mike Tobias reports. It’s from the new season of NET’s “What If…” series on innovation and creativity in Nebraska, airing tonight on NET Television.

"What If..." is the award-winning NET Television series on innovation and creativity in Nebraska. Learn more, and watch all "What If..." stories and shows HERE. 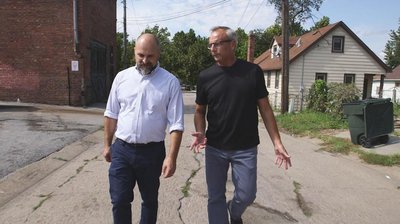 "What If..." host Mike Tobias (R) talks with Miah Sommer in the south Omaha neighborhood where Sommer grew up (Christian Champoux/NET Television image). Watch the "What If..." segment about Bike Union HERE. 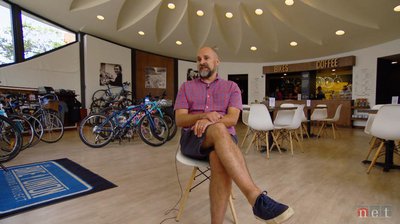 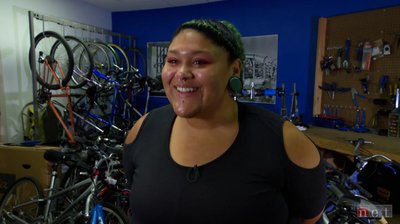 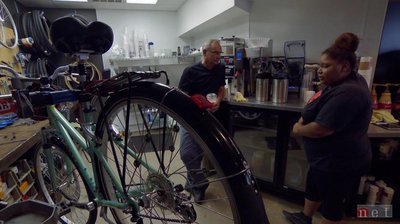 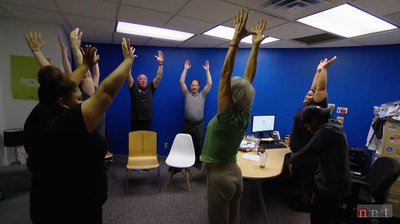 Employees and volunteers participate in Mindfulness Meditation, one of the other programs offered as part of the Bike Union program (Justin Cheney/NET Television image)

Special things happen inside an odd saucer-shaped building that once housed a downtown Omaha bank. The name, Bike Union and Coffee, says pretty much everything about the business inside. Fixing and selling bikes. Making and selling drinks. The lives of the young people working here make it different.

Makayla Squirrelcoat and co-workers were all in foster care, and like more than 300 Nebraskans a year they aged out at 19.

“It was just a lot of moving to different homes, and having to meet new families,” Makayla Squirrelcoat says, talking about her foster care experience. “Eight or nine in four years.”

“If you look at that demographic, there's a whole host of negative outcomes that are associated with it,” says Miah Sommer. “But I think the thing that really stood out the most is there's a 50 percent unemployment rate in that demographic.”

Sommer created Bike Union and Coffee and is executive director. “We started this bike shop, coffee shop as a means to provide workforce development for young adults who've been impacted by the foster care system.”

It provides 20-hour-a-week jobs for a full year for five young adults aging out of foster care. But more than a job. GED and academic mentoring are part of the program. Things like financial literacy and cooking classes. Life skills programs. A book club.

And mindfulness meditation. In a basement room, the young employees and older volunteers sit in a circle and go through activities designed to learn how to regulate emotions. “It's got to be out of left field to them,” Sommer says. “But of all the programs we do, I feel like it's one that comes up in the daily talk with them the most.”

Sommer says the bottom line is programming, not profit. But something has to keep the lights on. That’s mostly grants for this non-profit. But the coffee and bike side is about 30 percent of their income and growing.

“We generate kind of the lifeblood of the organization by refurbishing bikes and that kind of thing,” says Curtis Wilson, Bike Union’s operations manager and one of the three full-time employees. “It certainly helps provide a funding stream for us.”

Vallory Hatcher may be Bike Union’s “poster adult.” Taken away from her mom and put into foster care as a toddler. Two decades of living with a grandmother, her mother, foster parents, an agency for at-risk youth, even homeless. A young lady with no high school degree and no direction when she connected with the Bike Union.

“I felt like I couldn't do anything. I just felt really alone,” she says. “I just did not talk to anybody. I was super scared. I would just cry during my shift."

“She was in temporary housing, she'd stay in there all day, 15 hours a day playing video games and the world was just kind of like going away,” Sommer says.

“She was just really sad, really depressed. She actually wouldn't talk to me at first when I met her,” remembers Ashley Carlson, Bike Union program manager and one of the other full-time employees.

“So I got in here and immediately they're like, ‘Okay, you said you wanted to get back in school, let's do that,’” Hatcher says.

“To see her just come out of her shell socially has been huge,” Carlson says. “She has goals now. She sees hopes for her life. She is a different person completely.”

“She started achieving her personal goals, she lost 100 pounds, she started commuting to work, she started going to the gym, she graduated from high school, she got her own apartment,” Sommer adds. “I really think Vallory is one of my favorites.”

“I really look at this place as my family,” Hatcher says. “Changed my life completely. Completely.”

When Hatcher “graduated” from the Bike Union program, Sommer kept her around because of how she influences others. He hired her as shift supervisor, and Vallory started going to school with an eye toward being a social worker.

Pulling from her life story to help others. Something Sommer, a south Omaha guy who wasn’t in foster care but had a rough start in life, understands.

“I grew up in poverty,” Sommer says. “I grew up in a family that had a pretty long drawn out divorce and it was a pretty violent divorce and it ended up with me living in an unstable situation with an unstable single parent, so the risk factors were pretty great. It affected my school, it eventually forced me to drop out of high school and all of those things, while they weren't fun to go through, they were really instrumental in making me into who I was and the work I was eventually going to do.

This was a way for Sommer to take the leap from a comfortable job and combine lots of experience in the bike world, his life experience and an entrepreneurial spirit, into a unique social enterprise business. There are plenty of highs and lows. But Sommer says he knows what they’re doing is working and isn’t worried about the sort of measurables that look good on an annual report. The same sort of self-described “maverick attitude” that drives Sommer to keep this small. Impacting a handful of young adults at a time.

“We’re not here to fix them. We don’t see them as broken. We’re just here to provide the fertile soil for them to become who they want to become,” Sommer says. “We know that young adults age out of the foster care system and we know the negative outcomes that they face, but it's something that continues to happen. The only conclusion to draw is that we view them as a disposable demographic, and I think that's something that it really makes me angry and something that I want to make sure that we fix.”

Fixing a problem by fixing drinks and bikes.

Watch the "What If..." story about the Bike Union