Virginia and Vanderbilt compete for college baseball’s coveted championship tonight at the College World Series in Omaha. Around TD Ameritrade Park, you’ll see the colors of each school proudly on display – black and gold for the Commodores, and orange and blue for the Cavaliers from Virginia. However, baseball remains predominantly white.

If Hall-of-Famer Bob Gibson were still playing today, he would perhaps be an anomaly in the world of baseball: an African-American pitcher in a sport whose glory days has mostly faded among black Americans.

Gibson, now 78, is arguably Nebraska’s biggest name in professional sports. The Omaha-native spent 17 seasons with the St. Louis Cardinals. He is a two-time World Series Champion and a double winner of the Cy Young Award.

Wander around TD Ameritrade Park during the College World Series, and look around.

It’s hard to find anyone who is black. 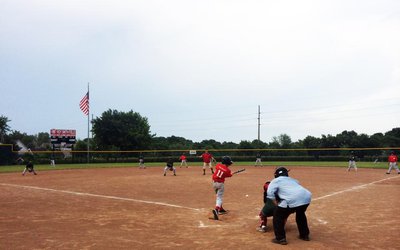 A double on opening day in Omaha for the police league's baseball program. (Photo by Bobby Caina Calvan, The Heartland Project)

The same could be said about players on the field.

“You’re not going to find very many African-American or Latino players that are playing in the College World Series. College baseball is largely dominated by Caucasian players, much more so than the major leagues are,” said Mark Armour, the director of the Baseball Biography Project for the Society of American Baseball Research.

Armour co-authored a study showing the year-by-year decline of African-Americans in the major leagues.

According to his tally, the number of African-American players in the major leagues peaked in the early 1980s, when nearly one in every five players was black.

Dan Levitt, the study’s coauthor, said college baseball remains the main pipeline into the majors. That’s significant because fewer players of color in college ball means a smaller pool from which Major League Baseball can choose during its June draft.

About two-thirds of those drafted are plucked out of college.

“To the degree that college baseball is starting to figure out its diversity issues, I think that’s great,” Levitt said.

“Whether it’s become more important or how much more important is hard to say, but it’s obviously very key in supplying talent to the major leagues," he added.

By its own count, Major League Baseball says 8.3 percent of its roster on Opening Day this year was black.

In comparison, the country’s population is about 13 percent African-American.

By that measure, the NCAA is not quite in the ballpark. Fewer than 5 percent of the 10,000 student-athletes in Division I baseball are African-American.

The two teams in this year’s College World Series may be emblematic. There are four African-Americans on Vanderbilt’s team. Based on a glance of photos in its press kit, the University of Virginia baseball team has just one African-American among its 32 players.

Damani Leech, the first African-American to oversee college baseball’s championship series, acknowledges the sport can do better in boosting interest among African-Americans. 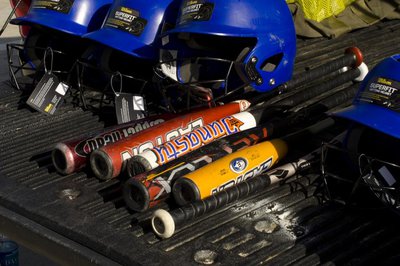 The NCAA teams up with local communities to help boost interest in baseball. (Photo by Bobby Caina Calvan, The Heartland Project)

“The NCAA and Major League Baseball have worked really hard on this issue. It’s not something that we don’t care about. That being said, our biggest focus on the collegiate level is making sure there aren’t any unnecessary barriers to entry,” Leech said.

“If student athletes are choosing not to play a sport for their own reasons, then certainly that’s fine,” he added.

It’s his job to make sure the tournament runs smoothly. The issue of diversity on the field, however, is a broader one.

“It’s certainly a sport that I played growing up," Leech said. "I think by the time I was in high school, I realized that I wasn’t going to be able to play it on the collegiate level but it really was my first love as a sport growing up as a child, and really loving to watch players like Ken Griffey Jr., who played for the Seattle Mariners in my hometown."

Major League Commissioner Bud Selig has acknowledged the need to do more. Last year, he established a diversity task force to explore ways to improve inclusiveness on the diamond and behind the scenes.

Selig has called April 15, 1947, the most “powerful and important moment in baseball history.”

That’s when Jackie Robinson put on a Brooklyn Dodgers uniform – No. 42 – and became the first African-American player to swing for a pitch in Major League Baseball.

While Robinson’s story continues to inspire, there are few current role models to draw African-American boys into the sport.

That’s according to David Ogden, a University of Nebraska at Omaha professor of communications. He’s spent more than a decade researching the decline of baseball among African-Americans.

“There’s nobody in these neighborhoods who serves as what I call a pied piper encouraging kids to play it,” Ogden said. 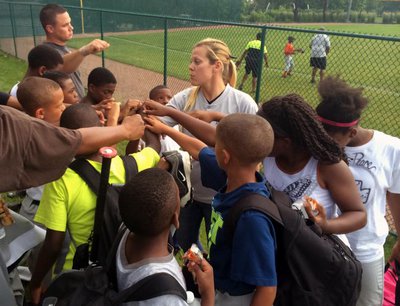 The Reviving Baseball in Inner Cities program (RBI) and urban youth baseball academies have exposed hundreds of thousands to the sport, but haven’t been able to stop the decline.

Each year, the Great Plains Black History Museum in Omaha stages a modest exhibit on baseball to remind the public of the important contributions made by African-Americans in the sport.

“There is an amount of history that exists with African-Americans in baseball that is not shared widely, and so our purpose during the time of the College World Series is to share that history with everyone who is here in Omaha,” said Terry Sanders, the museum’s spokeswoman.

The exhibit at Omaha’s Crossroads Mall runs through the end of the month.

It features a bat donated by Gibson and the trophy won by Technical High School in 1966, during tumultuous times in race relations. The team was mostly African-American, but also included white players from Omaha’s inner city.

“It was significant that these players came together. They played. They won. And they won statewide, not just in Omaha,” Sanders said. “And it is interesting in my opinion that their coach was white, that their student coach was white. But it was a predominantly African-American team and very proud team at that.”

Sanders said she can’t fully explain the declining interest in baseball among African-Americans.

All agree there are a myriad of factors – among the fact that college baseball gives out fewer scholarships than football. Baseball teams are limited to 11.7 scholarships – which are usually shared by much of the team’s roster – while a football team can award as many as 85. 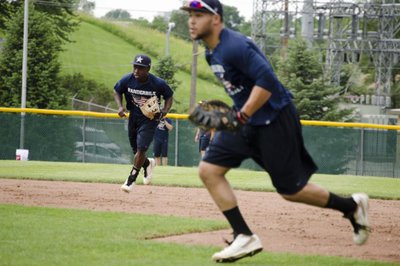 Ro Coleman, in background, is one of four African American players on the Vanderbilt baseball team. (Photo by Bobby Caina Calvan, The Heartland Project)

Ro Coleman, a standout freshman on the Vanderbilt baseball team, started playing when he was 5 – encouraged by a father who in his youth had been drafted by the Cleveland Indians.

Even then, it hasn’t been an easy road for the younger Coleman.

“I grew up in the southside of Chicago, in the Washington Heights area,” Coleman said. “It was rough, lots of gang violence. It’s easy to go off into those bad things, but baseball kept me on the straight path.”

Other boys aren’t as lucky to have that kind of encouragement.

That’s why youth leagues are trying to pitch in.

Saul Soltero, who was drafted by the San Diego Padres in 1987, knows how tough it is to break into the majors. He toiled mainly in the minor leagues.

On a recent afternoon at a South Omaha ballpark, Soltero coached boys and girls on opening day for teams run by the Boys and Girls Clubs and several Omaha police officers.

“Baseball is not the kind of sport where you can get one or two guys together and play around like you can in basketball or kick the soccer ball around. Baseball, you need a handful of guys to get a little game going,” Soltero said.

He said baseball can be an expensive sport for many families, especially in the inner cities. Kids from poorer families don’t have the money for mitts, cleats, bats and uniforms.

And they don’t have the money to send their boys to expensive academies nor the time to invest in elite baseball programs. 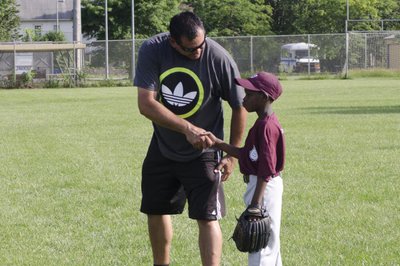 Saul Soltero was drafted in 1987 by the San Diego Padres. He now lives in Columbus and travels to Omaha to help coach youth baseball. (Photo by Bobby Caina Calvan, The Heartland Project)

Ogden, the UNO professor, has studied these “select” teams since 1999.

Of course, diversity is far from black and white, even in baseball – especially when it comes to Latinos.

Latinos now make up about a fourth of major league rosters – although many of those players are imported from Latin America.

Asian-Americans are all but invisible in the game, with most of the highest-profile Asian players such as Yankees pitcher Masahiro Tanaka brought in from Asia.

The NCAA’s Leech said things could be changing – at least for Latinos – as the college pipeline widens for homegrown Hispanic talent.

“That is probably been the biggest change over the last 10 years if you look at college baseball demographics: the increase in Hispanic ball players,” Leech said, adding the trend “probably reflects the overall changing demographics of the United States in general.”

But for African-Americans deeply steeped in baseball lore, it remains uncertain if the glory days of the quintessential American sport will ever return.

This report is made possible by The Heartland Project, an initiative to broaden news coverage of Nebraska's communities of color, as well as gay, lesbian and transgender issues. The project is funded by the Ford Foundation in collaboration with the University of Nebraska-Lincoln College of Journalism and Mass Communications, the Asian American Journalists Association and the National Lesbian and Gay Journalists Association.