Nebraska is one of three states where voters face a question about the death penalty on the ballot this year. And these votes are part of a still larger picture involving the future of the death penalty nationwide.

Abe Bonowitz, a consultant to numerous anti-death penalty efforts, including this year’s in Oklahoma, says the votes in these states could affect a future ruling by the U.S. Supreme Court.

Last year, the court upheld Oklahoma’s method of execution. But in a dissent, Justice Stephen Breyer said the court should reexamine whether the death penalty itself violates the Constitution’s prohibition on cruel and unusual punishment. Breyer cited states, including Nebraska, that had recently abolished capital punishment.

"That has sort of spelled a strategy for the national movement to take an Eighth Amendment claim to the U.S. Supreme Court, not on the question of whether it’s cruel, but on the question of ‘Is it unusual?’ That’s why it’s going to be relevant that there’s declining support for the death penalty," Bonowitz said.

Bob Evnen of Nebraskans For the Death Penalty was unimpressed by Breyer’s analysis. 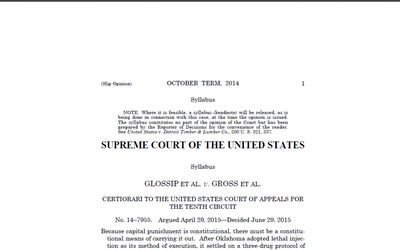 (page numbers are according to the computer, not restarted as in the opinion)

In his opinion, Scalia wrote, "It is impossible to hold unconstitutional that which the Constitution explicitly contemplates," citing the Constitution’s provision that "no person shall be deprived of life …without due process of law."

Still, Bonowitz maintains the Supreme Court could be influenced by this year’s votes – even if death penalty opponents lose in a state like Oklahoma. There, a Sooner poll in August showed more than three-quarters of the people support the death penalty.

"We think that it’s a win if we can get the vote down under 60 percent. By Oklahomans passing a referendum about the death penalty with anything other than overwhelming support would demonstrate a lessening of support for the issue in that state. And that contributes to the narrative of a national decline in support for the death penalty," Bonowitz said.

Oklahoma state representative and death penalty supporter John Paul Jordan rejects Bonowitz’ argument that a narrow victory would be a defeat for his side.

"A win is a win. Anytime you have something that is going up for election – to try and claim some type of moral victory when you lose in an election like this, he’s already bracing for the fact that this state question is going to pass," Jordan said.

The political landscape is different in California, where an initiative to abolish the death penalty lost just 52-48 percent four years ago. A Field poll last month showed this year’s measure leading 48 to 37 percent, with 15 percent undecided.

Jacob Hay, a consultant to the abolition campaign, is optimistic.

"I think here in California we’re close enough to keep it moving right over the 50 percent mark," Hay said.

"I truly believe when the public really knows what the death penalty is used for -- the worst of the worst, killing of peace officers in the line of duty, serial killers – that the public still feels that is true justice," Ramos said, adding "I believe that’s the sense that we will have not only in California but across America."

Attitudes vary, not just from state to state, but within states over time. In Oregon, voters repealed the death penalty in 1964, then restored it 14 years later, although recent governors have observed a moratorium on executions. Retired Oregon State political science professor Bill Lunch said that state’s votes reflected the national mood. 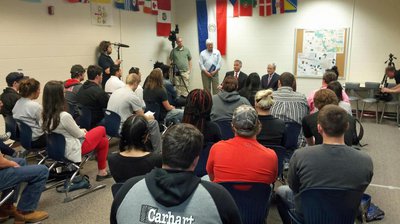 "1964... is in some respects near a high point for liberal ideas – the year in which Lyndon Johnson absolutely overwhelmed Barry Goldwater in the presidential election. And then 1978... is a year which is really the beginning of the modern conservative period, which then became more obvious two years later with the election of Ronald Reagan as president," Lunch said.

"These big, huge, broad generalizations that are made about sweeping trends, explaining in retrospect votes on particular issues, I think are generally suspect. I think the voters of Nebraska have a deep and long held view that the death penalty is a proper and just punishment," he said.

"I like to think that Nebraskans are better than that. That Nebraskans mirror that shifting attitude that we’ve seen in the country that the death penalty has out used its usefulness," Parsons said.

Parsons cites a Pew Research poll showing nationwide support for the death penalty dropped from 80 percent in the mid-1990s to 49 percent this year. An August poll for Nebraskans for the Death Penalty said Nebraskans favored restoring the death penalty by 58 to 30 percent; opponents said the poll was flawed because it didn’t mention the alternative was life in prison without parole.

Whichever way the votes go, it’s important people understand their votes on ballot issues across the country have real effects, says John Matsusaka of the University of Southern California’s Initiative and Referendum Institute.