Back on the Gridiron: Youth Football in Business During Pandemic

As high school football is being played in many places across the state, youth sports are also being played. At a youth flag football game in Lincoln, precautions are in place to protect players, parents and officials during the COVID pandemic.

At Lewis Fields in Lincoln, Jeremy Kildare gets ready for his teams’ warm-ups before a big game. Kildare coaches the Lincoln 7th and 8th grade Buccaneers flag football team and is also an official. The league is sponsored by the NFL, so players get NFL team-branded uniforms and helmets to play their games in. His 13-year-old son plays on the team he coaches. In March, the season was pushed back, because of the pandemic.

"There's an immediate worry, yeah, it's totally weird now and we just had to adjust to it but we did," Kildare said. "We're pretty grateful to play now."

Being cooped-up inside all spring and summer has had a big impact on the kids. 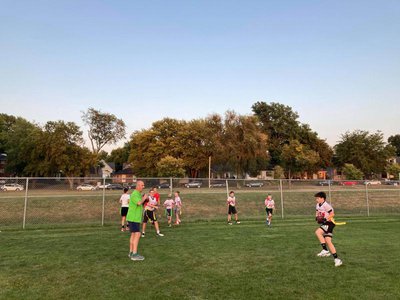 Jeremy Kildare (green shirt) warms up with his team. (Photo by Brandon McDermott)

“It's a good release for the guys. They haven't yucked it up with their friends for a while," Kildare said. And it wasn't only the kids he was hearing from over the summer.

"One of the moms (was) contacting me throughout the summer like, ‘Hey, we just get the guys together?’ Just over and over and over," Kildare said.

Jay Jacox with Lincoln Parks and Recreation said flag football was the first youth sport in the city to face COVID-19 restrictions.

“It took us a couple of months to get it approved through the city and through the county health department to go ahead and be able to play as safe as possible,” Jaycox said.

He said because of directed health measures in Lincoln, there are no concessions, no water fountains and no public restrooms at the games. And parents and other fans have to be 7 feet away from the sidelines during games.

"It's been a while to get this all put together just because it was all brand new and we went through a long process of writing protocols etc," Jaycox said. "About what we were going to do try to make it as safe as possible."

Jacox doesn’t think parents or players have much problem with the new rules.

“I think everybody's just happy to at least have some sort of semblance of normalcy in their lives," Jaycox said.

Kevin Sjuts is in his 6th year as a flag football coach and he’s also a parent of a player. He’s impressed with the work done by Lincoln Parks and Rec, in conjunction with the local health department, to get the kids on the field. 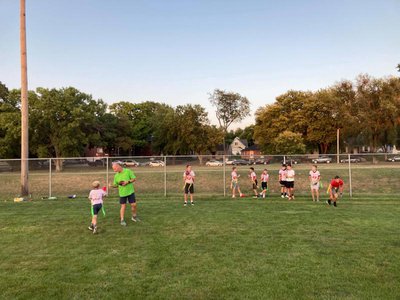 "But as we progress through the summer it sounded like, through Lincoln Parks and Rec, that they seemed hopeful and optimistic that with some new guidelines or protocols that they would be able to provide like before," Sjuts said.

He said he does all he can to ensure the equipment his players use during practice is disinfected, including all the flags and footballs they use. For games, the officials disinfect all balls between games.

“Hopefully it's provided the parents a sense of comfort that we're trying to reduce the amount of germs and also make sure that that equipment is not just thrown back in a bag and zipped up right afterwards as well," Sjuts said. "I try to air it out."

In the end, Sjuts both the players and their parents are happy to have sports again.

"(They get to) be on the football field and get lost in the next play or the celebration by the young child who scored the touchdown and you can just take a break from everything that's happening and it does feel good and it sounds good and it looks healthy," Sjuts said.

Back at the football field in Lincoln, The Buccaneers are taking on the Broncos. Kildare said it’s about keeping the kids safe and as a parent and coach, he thinks the new COVID health measures do just that.

“Anything that we can do to make sure that kids can get out and do what they need to be doing which is, hopefully playing sports. getting outside, taking hikes you know, whatever it is they do," Kildare said. "I mean that's the big thing.”

The Buccaneers played valiantly but fell on this night to a very strong Broncos team. Despite the loss, the joy of sports was back, at least for now, for a group of kids, coaches and parents who have missed this.