There’s a place where fans of old Hollywood westerns can dress up and shoot guns just like their favorite movie cowboys. In cowboy action shooting, a nickname and a pair of six-shooters are just part of the price of admission.

Danette Ray is standing inside a train depot re-creation, wearing cowboy boots, leather chaps and two six-shooters in holsters at her waist.

Before she draws her pistols to fire at a row of targets, Ray calls out: “You get back inside, I’ll cover for ya!” — a line spoken by Jimmy Stewart in the 1957 western Night Passage. 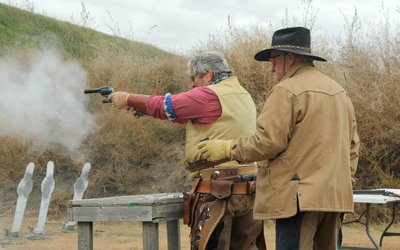 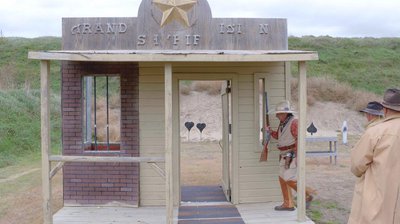 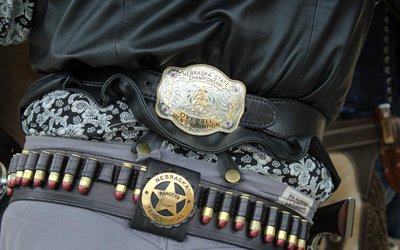 Ray, who goes by the nickname Marie Laveau, competes in cowboy action shooting, a brand of target shooting with historically accurate guns and costumes. There’s yet another dose of theater: In each round, the shooters play out a movie scene.

She and her husband each competed this fall in the annual Iron Hero competition in Grand Island. It drew people from eight states this year, all of them part of the Single Action Shooting Society, or SASS.

It started in California in the 1980s and has spread throughout the U.S. and into Australia, Europe and South Africa. The national championships are held in Phoenix every February; last year’s drew nearly 800 competitors of all ages.

Each SASS member competes under an alias like Jackalope Jim, Skunk Stomper or Crooked Creek. And western wear is part of the competition, too. “When you strap on the holsters and you’ve got all the other getup to it, it’s like you’ve forgotten about the outside world at that moment,” says David Sayers of Palmer, Nebraska, state coordinator of the Single Action Shooting Society (SASS).

Like the train depot, a rickety city jail and a hangman’s gallows set all look like they could have come from a Hollywood backlot. People who shoot cowboy-style have watched a lot of westerns. If you’re looking for a movie recommendation, there does seem to be a crowd favorite, Winchester 73, a 1950 flick starring Jimmy Stewart. Cowboy matches don’t settle grudges with guns as in the movie, though. They use a rulebook.

The winner of the Iron Hero match gets a medal. At nationals, the winner gets a trophy and a belt buckle. But for a lot of shooters it’s really about dressing up and hanging out. Let Pit Mule, aka Tracy Thorpe of Des Moines, Iowa, explain: “Child of the ’50s. It’s what you did, you played cowboys and Indians. … still playing cowboy, you betcha.”

For a day, they all get to walk in the boots of their childhood heroes.