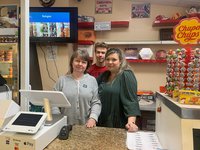 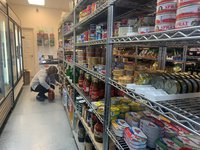 Since Russia invaded Ukraine on Feb. 24, some Nebraskans with Ukrainian ties have continued to work and live in the state, while worrying about the fate of Ukraine and loved ones who still live there.

At Lincoln’s Samovar European Deli, there’s a wall stocked with European candy and chocolate, each wrapped with colorful foil, by the entrance. Aisle refrigerators keep frozen herring from Russia and other foods cold. Other metal shelves are stocked with Eastern European biscuits, canned goods, and treats by Valentina Petrusev’s children. Both Russian and Ukrainian are spoken in this store. Trucks from New York deliver goods from Ukraine, Russia, Germany, and Poland. However, because of the conflict in Eastern Europe, they won’t see any Ukrainian products for six months to a year.

“We're not going to get anything imported. Whatever we have is what we have. And after that, I don't know what we're gonna do,” Petrusev said.

Petrusev’s family started the business eight years ago after taking refuge in Lincoln from the Moldova War in 1996. Her father is from Shepitovka in southern Ukraine and her mother is from Russia. Petrusev also married a Russian-Jew. They’ve seen both sides of the conflict since the war started. Petrusev has family in Ukraine, like her aunt and her 14 children who heard bombs two blocks from their home, and family in Russia.

“They're against the war, but they can't voice their opinions because they're so government controlled,” she said. “Anything against the government, they get jailed right away.”

Some of Petrusev’s friends did speak up and they’re in jail or waiting for trial. Petrusev said they can’t really do anything from Lincoln but send money, help with visa applications, and pray.

“We’re angry. We're angry about everything,” she said. “The community in town is angry about this whole situation, but we pray for peace.”

Born and raised in Blair, Kellen Derry feels that anger all the time. He’s been living in Kiev, Ukraine, with his wife, Nataliya, for the past 11 years, but recently came back to Nebraska for business, right before the war began, without her.

“I feel guilty that I'm in safety while I have hundreds of Ukrainian friends and colleagues, former colleagues, and students who are talented professionals who have had to pick up AK-47s and put on body armor and helmets and go out and fight,” he said.

Derry’s patriotic wife didn’t want to leave. He checked on her every half hour until she recently left Kiev on a 14-hour drive to her parents’ house in western Ukraine.

“They were going through the sort of back roads of Ukraine with an armed guard, a cat and a young woman,” he said. “They managed to make it there safely.”

Derry said he’s been able to sleep better at night, however some Nebraskans still haven’t been able to. Petrusev feels a lot of tension, grief and anger in the store. Customers would come in and immediately pour their hearts out while buying tea.

Petrusev said they went through several tissue boxes because customers have come in, started talking about the war and began to cry.

Since the war started, the store has turned into a sort of community center with Petrusev as the psychiatrist. Non-English speakers come to the store for a shoulder to cry on. They say their friend died or their uncle is in the war, and trust that what’s said in the store stays there. Petrusev believes the store is a lifeline right now and although business is suffering, it’s more important for the war to be over.

Derry thinks Nebraska and Ukraine are not much different from one another: fairly conservative, religious and ag-centric. He said Nebraskans are in a better position to empathize with Ukrainians than a lot of other states. Derry appreciates hearing thoughts and prayers, but he encourages people to consider donating to help.

“Right now, it's basically like the Russians are rolling through the Sandhills, on the way to Grand Island and in Kearney and North Platte,” he said. ”And trying to encircle Omaha or Lincoln, like that's the way that we have to start thinking about these things.”