For rural hospitals struggling to stay financially viable, obstetric services are often among the first programs cut. More than half of the country’s rural counties no longer have a place to give birth, but women there don’t stop having children.

When Sarah Scantling went into labor this summer, she had to drive 30 miles and across state lines.

Three years earlier, the only maternity ward where she lives in Pemiscot County, Missouri closed down. Scantling had to choose between a handful of other hospitals in the region between 20 and 70 miles away. She chose to give birth in the hospital in Dyersburg, Tennessee.

It’s not uncommon for pregnant women in rural America to have to travel to give birth; the percent of rural counties without hospital obstetrics has increased in recent years to 54 percent, up from 45 percent in 2004. Still, 30 miles is a long way to be from your family if something goes wrong, as it did with Abilene.

“I knew something was wrong when she didn’t cry. And then they just rushed her away,” Scantling recalls.

Abilene was born with a hole in her heart. It was unexpected. The hole hadn’t shown up on any ultrasound. She was taken even farther from home on a medical flight to a hospital in Memphis, 130 miles away.

“I didn't get to hold her for two days. I got to say goodbye to her and that’s it,” Scantling says.

‘We Felt It Was Coming’

Pemiscot County tried to rebuild its maternity program before it shut down three years ago. Pemiscot is rural — and the poorest county in Missouri — but the county-owned hospital has weathered many ups and downs. It recruited family practice doctor Erica Scheffer and her husband, an OB-GYN, to modernize the obstetrics unit.

“We were making improvements. We were getting new equipment, new nurses, sending the nurses for more training,” Scheffer remembers. 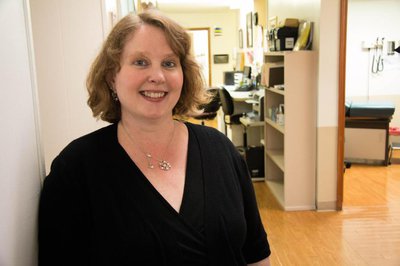 Dr. Erica Scheffer still sees pregnant patients in Pemiscot County until 32 weeks, when she refers them to a doctor at a different hospital to deliver. (Photo by Bram Sable-Smith, Side Effects Public Media)

“And then probably two years into it, things started going south.”

The hospital lost more than $3 million in 2013. To stay alive, the hospital started to cut some of the more costly programs. Obstetrics was the first to go.

“We all felt it was coming,” Scheffer says.

Pemiscot is part of a trend in obstetrics unit closures. According to research published this month in Health Affairs, 179 rural hospitals closed their obstetrics units between 2004 and 2014.

Katy Kozhimannil, director of research at the University of Minnesota’s Rural Health Research Center, which conducted the study, says there are many reasons rural delivery units become too costly to keep around. Medicaid, for example, pays hospitals much less for child delivery than private insurance does. And Medicaid pays for moer than half of all rural births — compared to about 40 percent in urban parts of the United States.

Plus, just like their populations, birth rates in rural counties are dropping.

“And as numbers fall, it becomes harder and harder to maintain the staffing and the skills that are needed to be ready for a birth at any time,” Kozhimannil says. “And the way those communities respond differs pretty dramatically.”

Dr. Sheffer was Sarah Scantling’s doctor during her first pregnancy. After Scantling’s son was born, Scheffer became his pediatrician while also helping Scantling through postpartum depression. Now, Scheffer still sees pregnant women at Pemiscot County Hospital, but only for 32 weeks. After that, she refers them to a different doctor at a different hospital to finish their prenatal care and to deliver.

That is, if they can make it.

“Sometimes they don’t have a way to get to the new doctor and just show up when it's time to deliver. And sometimes, that’s by ambulance because that’s the only way they have to get there,” Scheffer says of her patients.

The hospitals in the area have a name for that: “drop-in deliveries.”

Sometimes Scheffer’s patients don’t make it to their new hospital at all. She says at least three babies have been delivered in the emergency room at Pemiscot County Hospital since the obstetrics unit closed.

Sarah Scantling was fortunate to have someone who could drive her to her appointments. She was also fortunate both Tennessee hospitals that delivered and cared for Abilene accept Missouri's Medicaid for payments.

Now, Scantling can bring her baby girl to see Dr. Scheffer, like the rest of the family.

“Sometimes I come up here and just ask them to listen to [Abilene’s] heart,” Scantling says.

It’s a relief, she says, to be back with the doctor who knows her family so well.

This story was produced by Side Effects Public Media, a news collaborative covering public health.

Bram Sable-Smith is reporting this series during a yearlong Reporting Fellowship on Health Care Performance sponsored by the Association of Health Care Journalists and supported by The Commonwealth Fund. This story is part three in series on rural hospitals. Read parts one and two.