He’s known for his aggressive, almost angry paintings, work that includes familiar symbols and bright colors. For Matt Sesow, art has become therapy, an outlet for an accident that happened more than 40 years ago along a grassy runway near Lincoln. The mishap changed his life, but also opened up a whole new world.

Sesow is about as low-key as they come, affable and polite with a friendly smile and a genuine quality about him. You’d never guess he’s the guy who has produced around 17,000 paintings that are anything but low-key. There are lot of sharp teeth, hard angles and vivid colors. Some have described his work as “urban anger” and “obsessive,” and he’s OK with that.

“I am obsessed. I will hopefully do this my last day, will be painting,” Sesow said.

His story begins in Nebraska. He was born in Omaha and grew up near Waverly. His family lived next to a private airstrip where nearby homeowners could land their planes. He was eight years old and was playing a game of spud with his friends near the runway. 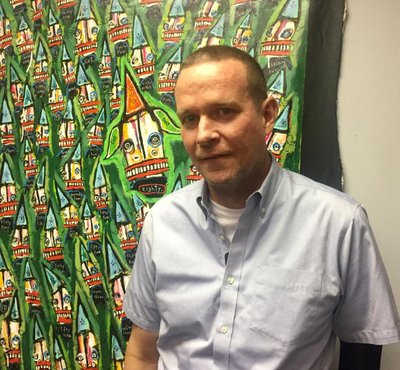 “What I did when it was my turn to be the guy who threw the ball in the air, I thought it would be really funny if I called my own number. So I called my number, threw the ball up in the air and just started running and I woke up in the hospital,” Sesow said. “Turned out one of the airplanes was landing, so as I ran, I guess I ran out towards the runway and onto the runway and it landed on me and severed my left arm.”

It was a life-altering accident, but his parents and friends didn’t treat him any differently.

“I was never really allowed to have ‘a feel sorry for you’ moment. I played baseball, played on the high school football team, did track,” he said.

Sesow taught himself computer programming and attended college in Oklahoma. His first job was at IBM as a software engineer in Washington D.C.. It was there Sesow’s artistic journey began with no formal training.

“I came upon that just kind of as a way to socialize. I was this kid from Nebraska, all these cool city kids in D.C. who would talk about all the punk music that I liked and wanted to bring something to the table that was unique, so I kind of lied my way into saying that I could paint,” he said. 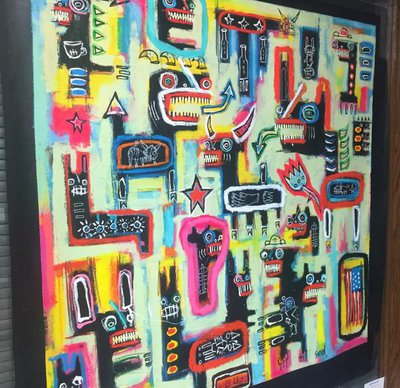 Sesow discovered his trademark aggressive style came naturally, a mixture of anger, therapy and a little bit of his love of punk rock mixed in as well. It was an appreciation he sharpened as a teenager at The Drumstick rock club in Lincoln in the 1980’s.

“I never drank. I would always have a soda water,” he said. “But I got to see Black Flag and I got to see all these incredible bands from these places I had never been to and they were singing and doing things about fighting to grow as a person. That’s kind of what that music was about to me, was about overcoming and rising up over your adversities really.”

He’s 51 and still paints almost every day. He shares a studio in Washington D.C. with his wife, Dana Ellyn, who’s also an artist. The majority of his work is priced under $1000, even the larger pieces. It’s something he’s proud of.

“That’s one of the main things that I try to do, is make it super-affordable. Going back again to The Drumstick and you could go see a band for $3 or $4, so my idea is I’m kind of giving that option to people through painting,” he said. “Then if somebody says, ‘Your work is unhappy or crazy but I kind of like it’, I’ve actually given away paintings for free just because somebody likes it. I would rather somebody be happy with one of my paintings than me holding onto it.” 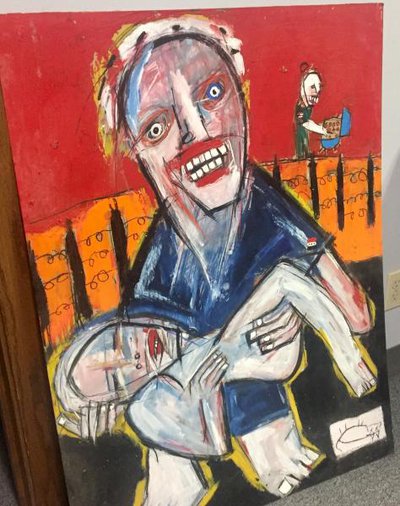 With his childhood accident fading into the past, Sesow says he’s ready to let it go, to find another inspiration for his work.

“Being in Nebraska was my foundation. I wouldn’t trade it for anything and it gave me the advantage to do the painting I do, but I’m a different person now because of my experiences in Washington D.C. and traveling the world doing art shows,” Sesow said. “It’s a chapter and I shouldn’t go back to the first chapter all the time. I need to build now and have new experiences and grow as an artist.”

True to his Nebraska roots, Sesow has even painted his depiction of new Husker football coach Scott Frost. He’s wearing a Nebraska jacket and there’s a phoenix rising over his shoulder, a symbol of the program’s rebirth.

“This is called ‘Out of the Darkness and Into the Light’. Doesn’t look like him at all, but we’re very hopeful right now so that his rising phoenix icon came there,” he said.

As he rewinds 40 years in his mind, back to that grassy runway near Lincoln, Sesow says that traumatic day has in a way been a blessing, if something like that can be.

“I’ve had a lot of really, really unique opportunities because of the accident in a way,” he said. “I don’t think I would be a painter. I don’t think I would have painted if I wasn’t hit by the airplane. And I also as well say if I wasn’t from Nebraska, because I think there are people who paint like me and they do an awesome job, but I just don’t know if they’re going to do 17,000.”

Sesow says he’s a happy man these days, an artist who has used his paintings as therapy for wounds that are finally starting to heal.

Matt Sesow's "All In The Family" show is at Lincoln's Metro Gallery through July 31st.