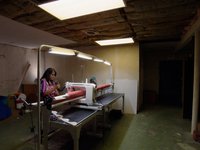 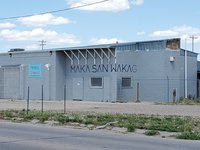 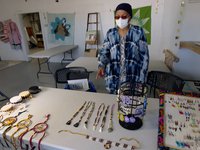 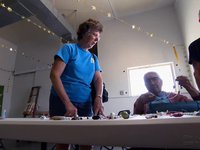 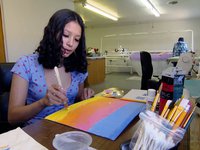 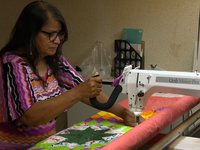 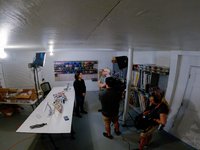 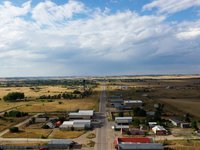 They call it art over alcohol. One building in a northwest Nebraska village transformed into something providing much needed jobs and hope to a troubled area. In today’s Signature Story, Nebraska Public Media producer Mike Tobias takes us inside the Whiteclay Makerspace. The story is part of our “What If…” project on innovation and creativity in Nebraska. Watch this story in a new episode that premieres tonight at 7 p.m. CT on Nebraska Public Media.

Nadine Morrison is a master of the room-filling quilt machine. Using something like a steering wheel to easily guide a sewing machine sitting on eight feet of rails, back and forth to create a full size star quilt.

Morrison sketches the design first, then “we have a pattern that we just trace for all the lines and then we just follow it with the needle,” she says. “I do two to four star quilts a week.”

The bright colors of Morrison’s blouse and quilt she’s creating give life to an otherwise drab cement block room and building. The Whiteclay Makerspace is clearly a work-in-progress. But for Morrison and other Oglala Lakota creators it’s a place where they can make and sell their work. It’s a better use for the building than what it used to be.

A little background. For years, Whiteclay, Nebraska, population eight, was best known for having four liquor stores selling millions of cans of beer yearly, mostly to the Oglala Lakota living a short walk north on South Dakota’s Pine Ridge Reservation. On the reservation alcohol is banned but widespread alcoholism drives poverty, unemployment, violence and death. On Whiteclay’s streets people were drinking, passed out and fighting. There were accounts of rape and murder.

“It was pretty rough back then,” says Lily Larvie, an Oglala Lakota woman who lives on the Pine Ridge reservation. “A lot of bad stuff happening here all the time, and a lot of people died around here.”

Change came when Nebraska officials forced the beer stores to close in 2017.

“What we're basically trying to do is provide opportunities for Oglala Lakota to help themselves,” Jon Ruybalid says. We talked with the lawyer-entrepreneur in space that used to be a beer cooler for the Arrowhead beer store.

Ruybalid helped turn one of the abandoned liquor stores into the makerspace. Fans that used to cool beer still hang high on the walls of this room. Now it’s full of beads, cloth and other supplies makers can purchase. Everything in the building is about creating jobs.

“What we're trying to do is help Lakota artists and crafters who have natural abilities, or they've been taught by their grandma or whatever, how to make things with bead work or leather work. They really have these skills, but they need resources. They need basic tools or dremels or a quilting machine or sewing machine.”

About 10 artists, most living in nearby Pine Ridge, work or sell here each week. They pay small fees for space and sales. The non-profit operation is mostly supported by donations. They hope to grow the number of makers, offer more classes, and build an outdoor area.

“We're in it for the long haul,” Ruybalid says. “We don't expect to set the world on fire this year or next, or whenever, but one artist and crafter at a time, one household at a time.”

Morrison is here a lot. She helps Ruybalid runs the makerspace, and she makes a lot of star quilts. These are important, sacred symbols in Oglala Lakota culture, created and given to celebrate births, graduations and weddings, and honor those who’ve died. Many of Morrison’s creations have been for deaths in her community.

“For me, it was therapeutic. I feel like it helped people in our community because I would listen to their stories. Some of them were tragic. I would go home, and I'd cry and pray for them.”

The Whiteclay Makerspace was born from a couple things, including a study that found half the households on the reservation depend on home-based businesses. Most involved arts or crafts, and getting supplies meant a long drive to the nearest city. Closing liquor stores and creating a makerspace hasn’t ended alcoholism on the reservation. But it has provided opportunity and hope.

Oglala Lakota creator Brenda Good Lance makes star quilts, necklaces, dream catchers, warrior shields, medicine wheels and other things. “I love this makerspace,” she says. “It helps me to feel much better about myself knowing I can come somewhere where we're safe, no alcohol, and we could do our jewelry, beadwork, and make some money on the side for our families, our rent, lights, car bills. So I am very happy this is open.”

“The people are struggling,” says Oglala Lakota creator Larvie, “and I wish more of them would learn more of the art side of things because it helps. It helps you stay busy and stay out of trouble and gives you an income.”

Morrison also wants to inspire a younger generation of Oglala Lakota to create with their hands like their ancestors. Like Leilani McLaughlin, Morrison’s granddaughter. We talked with her about what art can do for her generation of Oglala Lakota, as she worked on the background of a painting of a cherry blossom tree. “I feel like it's a good way to express ourselves and what we want to do. It could be a distraction for if anything's going on and you just need to get away. I feel like it’s a good way to clear your head and it’s very relaxing.”

“I think it’s cool what they turned it into,” McLaughlin adds.

Art over alcohol is a social media hashtag here. A philosophy. It’s a place that makes Nadine Morrison feel happy.

“I think it's just really amazing that we could turn a bar into a place where we can create,” Morrison says.

The Whiteclay Makerspace is one of the new stories for our "What If..." series on innovation and creativity in Nebraska.