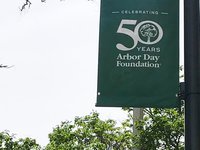 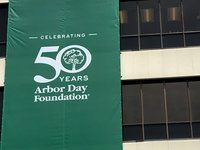 The 150th Arbor Day happens this Friday, while the Arbor Day Foundation turns 50-years-old on the same day.

In 50 years, the Arbor Day Foundation has planted approximately 500 million trees. The Lincoln-based organization said it intends to plant another 500 million trees in the next five years alone, to celebrate 50 years of service.

Pete Smith is a program manager and arborist with the foundation. He said reaching the goal would help create a safer planet.

“While our goal is 500 million trees, we know that we need billions - some would say a trillion trees planted, to address some of the major issues facing the globe like climate change,” Smith said.

Smith said 150 years of Arbor Day should be a source of pride for Nebraskans.

The foundation placed signs around its office on 12th and P Streets in downtown Lincoln sporting its 50th anniversary logo.

Smith said the logo will be used throughout the year, to celebrate its half-century in existence.

The Arbor Day observance encourages people around the world to grow trees. It occurs on the final Friday of April in many countries and states.