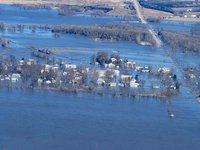 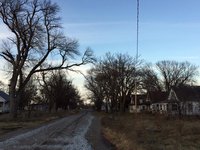 In the weeks following the floods of 2019, some people in Nebraska just wanted to start over. The town of Winslow, just north of Fremont, seems ready to take that challenge and relocate to higher and drier ground. 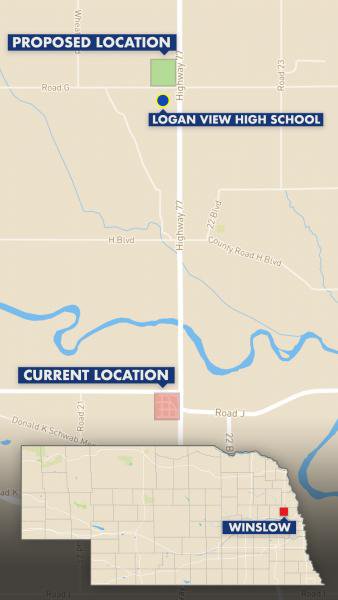 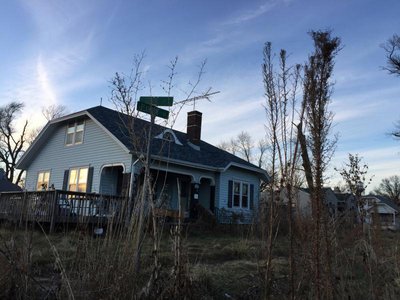 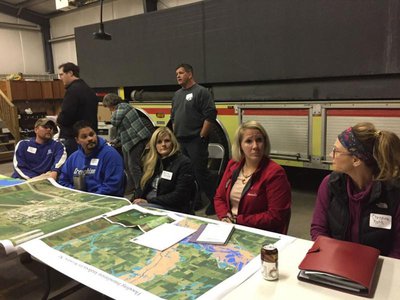 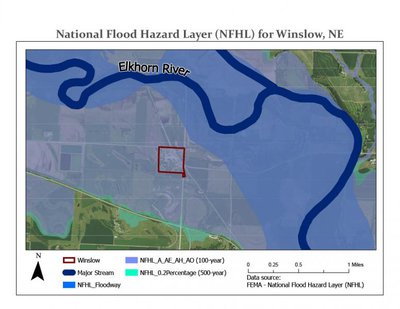 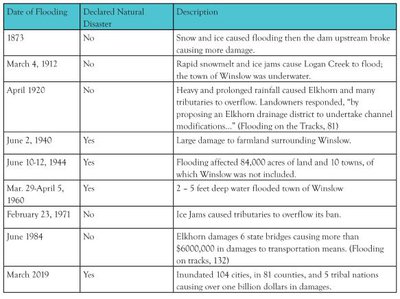 After the flood, empty homes and weed-covered lawns became the norm.

Residents gather in October to review options for the future of Winslow. (Photos by Bill Kelly, NET News)

Diagram from UNL student presentation showing the extent of flood risk along the Elkhorn River.
History of flooding in the vicinity of Winslow, Nebraska. (Charts by UNL School of Architecture)

"Winslow is not going to be where it's at by the end of next summer," predicts village trustee Zack Klein.

After nearly two feet of water from the Elkhorn River rolled into town in March of 2019, most of the 100 residents did not return to their homes.

Waist-high weeds fill almost every yard. Dried mud still covers the sidewalks. It's so quiet visitors hear only the steady hum of traffic along Highway 77.

The shiny Christmas decorations are up on the street light poles, but hardly anyone's left in town to see them.

"I hate it. It's dead," Klein told NET News. "The families aren't there. It's not home." Because of its location on the flood-plain, new structures would have to meet more rigorous building code and planning regulations changes in the village's look and feel mean "it's never going to be home there again."

Talk of moving Winslow began to get serious when residents realized there had been significant flooding in or around town eight times since 1912.

Assessments done after the record high waters of 2019 found all but one of the 51 buildings inspected could be occupied without repairs.

Ken Rice found "twenty-eight inches of water left a lot of mud" when he finally saw his home on Main Street. "It was hard to get to the house without boots. Just a big mess," he recalled.

His neighbor, Nilene Parker, could not get to her home until the water receded six days later.

"When I entered, I actually thought it wasn't that bad, but I suffered 66 percent damage," Parker said. "My house is still completely gutted. I have no plumbing, no electricity. This winter I'm just living somewhere else until we know what's going on."

By "what's going on," Parker meant getting a more definitive answer on whether Winslow proceeds with a very stark choice. Residents need to decide whether should Winslow cease to exist, stay where it is or pick up and move the entire town.

It's becoming clear many will move their homes or build new on land the village hopes to acquire early in 2020.

"It's very black and white. I would say the majority of the residents are on board," according to Amanda Westergaard, who owns rental properties in town. "They love their community. They love their neighbors. They don't want to give up on their town."

Even before the flood, Westergaard believed something needed to change as the village's population and the tax base continued to shrink.

"The services in Winslow were declining, as are many of the smaller towns around here. The infrastructures are very old. The sewer systems are starting to deteriorate," Westergaard said.

Relocating the town using federal and state aid and private grant money provides an opportunity to start from scratch.

Because this was a big decision, the town took advantage of an offer to help gather needed information about available options. A group of graduate students from the University of Nebraska-Lincoln School of Architecture stepped in to help and ask questions.

Over the summer, the city planners in training visited the town, spoke with residents about the impact of the floods, and analyzed the risks and benefits of Winslow staying on the land where it was founded in 1895.

Winslow is "a community that's been faced with natural disasters throughout the years, building up to the flood disaster of March 2019," said Chelsey Pounds, a graduate student in the Community and Regional Planning Program. "It's very important that we provide some of that context (and) show the community these are the risks you will continue to face should you stay in the current location." 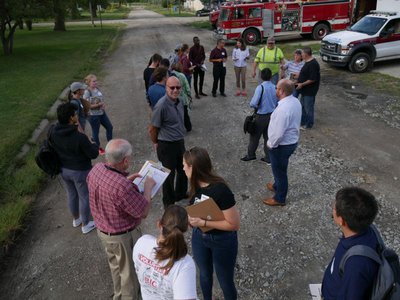 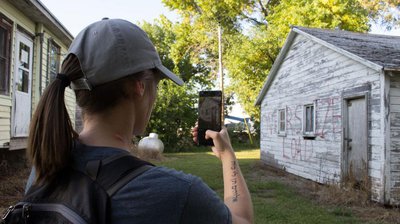 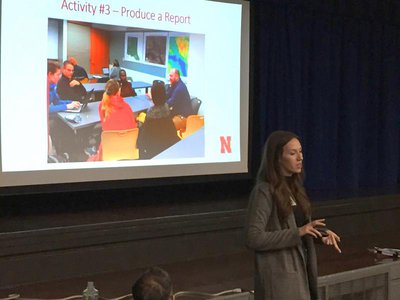 UNL students arrive in Winslow to assess damages and the town's needs.

The planners-in-training conducted a series of discussion groups and interviews with property owners. With federal disaster aid, homeowner's insurance, and the potential for private grant money, some saw an opportunity to rethink Winslow while remaining a small town.

During the summer, Winslow's planning group located a possible site to relocate the town. It's a plot of land in a cornfield three miles to the north on State Highway 77.

The biggest advantage was the comparative safety from high water. It's up on a bluff, fifty feet above the current Winslow and well above the flood plain.

During a discussion set up for residents by the UNL students, residents did some dreaming about the advantages of relocating Winslow's homes. They talked about the benefits of new parks and sewer lines. All agreed it would be nice to live miles away from the noisy freight rail crossings.

The land is also across a county road from the Logan View school complex. Two participants, examing the preliminary layout maps handed out that night, spoke of the potential for growth.

"If you had a town that's close people," said one homeowner, "they would move into Winslow just to be close to their kids, so they don't have to drive into Logan View."

"It's actually a really, really great idea," said another resident.

At the same time, the residents' committee agreed they did not want to become too large a community. "

"Staying a village would be a good goal," Zach Klein said, "which would be 800 or less population."

Prior to the release of the planning students' final report, other residents remained skeptical of the advantages of relocating the town.

"It seemed kind of fast to me. We flooded. Let's move the town," Rice said before the December town meeting. "I've been there 20-plus years and it's kind of hard to just take a buyout and walk away from it."

The town twice surveyed residents about acquiring land and relocating. "The numbers have not changed," Klein said. "Roughly 25 people want to relocate and initially there were three that wanted to stay."

"The numbers are staying pretty tight," he said.

The final report from the planning students seemed to make an impact, especially the summary of Jason Cyboron, a student of Hazard Mitigation.

"The current levee can only be designed to the 50-year flood level because of the highway," Cyboron told the crowd gathered in the Logan View High School lecture hall. "So really, there's no way really to get Winslow out of the flood plain.

"This disaster could happen next year," he added.

"It's not going to get better," Pounds told the quiet room. "Vacating the village means that there is automatic safety."

It was enough to convince neighbors Parker and Rice, who both arrived at the meeting skeptical of the relocation.

Parker said once she heard "the levee can't be built back or built up any higher, the relocation started to make a little more sense. You're like, 'Oh, wait! I don't want to deal with this every year.'"

Rice added, "I'm to a point where I'm willing to relocate, definitely entertain the idea of a buyout."

If the plan to move Winslow proceeds, some homes will be picked up and transported down the road, if possible. Other property owners will build new homes using their insurance and government flood assistance.

Nobody will be forced to move.

"It's a 100% voluntary process," Klein emphasized. "Everybody knows what their, what their options are and we try to give them as clear a picture on any one of those paths that they want to take."

There remains much to finalize if the town intends to move. Klein says including work on obtaining funds, government agency approvals, and other details.

Leaving the high school after the students made their assessment Klein said, "Right now we're running on the hope that we can keep our community together and then we can rebuild, and we can move forward from there."

He hopes the land for the new Winslow can be acquired by February.

Editor's Note: In an earlier version of this article, a photo caption misidentified the individual taking a photograph. The student is Kayla Vondracek, not Chelsey Pounds. We regret the error. 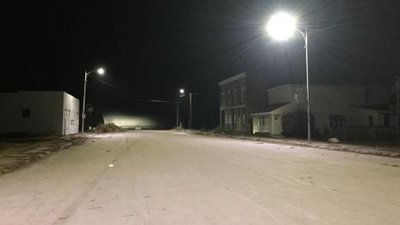