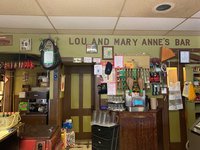 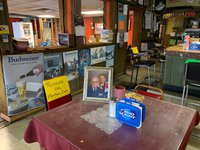 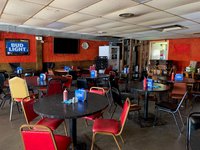 In the small town of Bee, about 40 minutes outside of Lincoln, Lou & Mary Anne’s Bar is famous for its year long Friday fish fry. The bar is closing Sunday, July 11 after nearly five decades.

Loyal customers come to the tiny community of Bee, population 208, to visit the town’s only bar. Red and brown carpet covers the walls, some of the leather on the chairs is ripped, and right in front is a table and two chairs reserved for Lou and Mary Anne Dart. When Mike Schluckebier’s dad told him the bar was closing, he drove for six hours with his daughter from Iowa City last week.

"The first thought when I heard that it was closing I thought, 'When is it closing? And can I get back here one more time before it closes?" he said.

Schluckebier grew up in Lincoln, occasionally visiting the bar on Fridays with his family. They found one last weekend to meet and feast on the fried fish. Schluckebier said it was nice seeing the carpet on the walls, but what makes the bar so special was the food and people.

"Small town Nebraska where everybody parks down the middle of the street, and you see the big bee in the middle of town, all of those things were great memories from my childhood," he said. "I wanted to experience it one last time."

The people behind the bar were Lou and Mary Anne Dart. They took over in 1974 after Lou retired from the Air Force. They served pork chops, prime rib, gizzards, and fried fish for over 46 years. Lou passed away about a month ago at 92 years old. Local Gary Roberts and member of the board of trustees said Lou had served people his whole life, delivering rural mail while running the bar, and supporting the church and local fundraisers.

"You don't know what Lou and Mary Anne meant to people in this community," he said. "See, we're not even in relation and we struggle talking to you. They had that type of impact on you."

"She sat at that front table all the time. She'd sit there from the time she got up, to the time they pretty much closed at night," Sandy Roberts said. "She had her word search puzzles in front of her, and she'd be doing that, and greeting people as they came in the door and waiting on people in here, and cleaned this place for years. She was incredible."

Mary Anne passed away last year, but her fish fry recipe is still the same. Pieces of Icelandic cod fish are lightly breaded and fried. It’s thick, juicy and tender. And paired with coleslaw, fries, and a piece of buttered bread.

"It's just amazing fish, really is. A lot of places, over bread it," Sandy Roberts said. "It's just the way they do it, specifically by Mary Anne's order, when she started it, that's the way they've always continued doing it. And, it is amazing, everybody around will tell you that.

Jenn Nantkes, granddaughter of Lou and Mary Anne, said the recipe will die with them.

"Grandma and grandpa were fabulous. I think their favorite part of the bar was the customers," she said. "Grandpa would come out and he would talk to everybody, sit down and join people, whether he knew them or not. That was his thing and just that's what he loved."

Nantkes said that’s a part they can’t carry on. Since Lou passed away, family members, like Roxy Dart, have traveled to Bee to keep the bar running. Dart is Lou and Mary Anne’s daughter from St. Croix in the Virgin Islands. She was too busy running the bar to talk about its closing.

"The family at this point really hasn't made a lot of decisions about what's going to happen after the bar closes," Nantkes said. "There are eight kids all together, so by the time they all get together and make those decisions, [they'll be done]. It hasn't been done yet."

Local Sandy Roberts said she’s concerned about the fate of the town once the bar goes away. She thinks Bee will lose some of its soul because all it’s got left is a post office.

"Everybody came here from all over Nebraska, all over the country. They would come here for fish fries and everything, and now they're not going to come back," she said. "We have nothing here to offer them anymore. So, it's going to be crushing. It really is."

Michelle Vogt, another granddaughter of Lou and Mary Anne’s, said with licenses under their name, equipment not working very well, plus family members away from home, it wasn’t the easiest decision to close, but they knew they had to.

"That [The bar]'s where we have our holidays. It's going to be a big change for all of us, and we're all definitely going to miss it. We've grown up there," Vogt said. "It's always been a huge part of our lives, and many people's lives. It's going to be tough for all of us. But, we know that all good things come to an end, unfortunately, so it will be."

Lou and Mary Anne’s family want to thank customers for being so loyal. Their grandparents made the bar great but it was the customers that kept it going. But, the Roberts don’t just see themselves as customers.

Sandy Roberts said, "You've asked about what they mean, Lou and Mary Anne both. And we've been saying they’re business owners and they’re supporters of the community, but they are family to everybody that walks in here."