Advice for future Nebraska entrepreneurs: 'Just go and just do it' 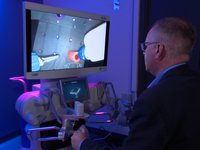 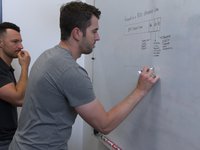 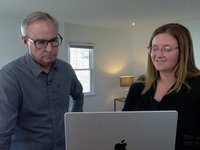 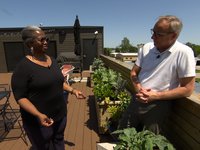 An entrepreneur’s journey is rarely easy. But on the sometimes rough road to success they learn a lot about things like persistence and risk-taking. We asked several Nebraska creators to share advice for future innovators, in interviews that are part of Nebraska Public Media’s “What If…” project on innovation, creativity and entrepreneurship in Nebraska. (Watch a new episodes of "What If..." Thursday, Jan. 5 and Thursday, Jan. 12 at 7 p.m. CT on Nebraska Public Media.)

Shane Farritor, UNL engineering professor, and co-founder and CTO of Virtual Incision. The Lincoln tech company he helped start in 2006 is creating a new surgical robot that’s smaller in size than what doctors currently use. They hope this will make it easier — and less expensive — to set-up and access less invasive robotic surgery.

“People talk a lot about being persistent and I kind of look at it a little bit differently. I think you have to embrace the process. It's not that you're sticking with something over and over and over again. That's what you do. That's actually how it should be. So, I think continuing to try when things go well and continuing to try when things don't go well is really just how you should operate," he said.

“We almost aim to have things not work out because the goal of what we do is to keep trying things and learning from what we do. So we really don't call them mistakes," said Farritor. "The goal is to do things to find out better ways to do things.

“Find something that you're interested in. Find something that you're good at, because I think that's a gift that you have, and you need to develop that gift. That's going to require you to listen to others, find mentors, work hard at school. You have to kind of be good at something before you're going to be able to help others with it. So when you're young, I think the goal really is to develop your gifts," he said.

Lawrence: “If I were speaking to entrepreneurs, I’d say this path is going to take twice as long as you think and cost twice as much. If you have the ability to understand that early on, that it's not going to come to you all at once, it's not going to be easy, but it will be worth it.”

Kunalic: “Remember that no one has it all completely figured out, and just to go and just to do. I think sometimes people will spend a lot of time planning and reading and prepping and not taking the first step, and not taking action. Yes, that's a part of the sequence or that's a part of the process, but I would just encourage young entrepreneurs or innovators just to pursue something, to take action, to go and to start building.”

Lawrence: “All of us have ideas. The difference between entrepreneurs and innovators and everyone else is that those entrepreneurs and innovators pursue those ideas. They make things happen. My advice to any young innovator, entrepreneur is to get started. You’re never ready for that first moment, but if you get started, you'll find your way towards success. Success could be many things. It could mean that you learn something new that you actually got your product into market. You got your solution in the hands of people who need it or you learned a thing or two. But you cannot just have an idea and hope that people are going to come to you and ask for it. You've got to get started and tinkering and working and innovating and building out your idea so others can get access to it.”

Kunalic: “Get going, because it's going to take a long time and do it with somebody. If you can, do it with someone that cares about it as much as you do. And just, if you can focus on a problem that you're solving, that hopefully you have some connection to because when it gets tough, those are the ones that are breakthrough and the things that you can be absolutely determined to solve.”

Teresa Friesen, founder and CEO of SheMate. The Omaha business created an online platform where young girls, parents, coaches and teams pay to become members and get connections with female college athletes who are paid to participate, thanks to newly developed NIL opportunities.

“Risk taking is really what makes possibilities happen. It's important to think about risks in two categories. One is when they're really obvious and they're really big risks. But another part is just thinking about the little tiny things that kind of look like more risky behavior," said Friesen. "When you're in innovation and creativity, you really have to change the status quo. And so instead of going along with all the things that are kind of your normal, you instead take a step back and think about what's possible and what change can happen.

“If you're engaging in true innovation, it means it's never happened. It's never before existed, and people are going to have a lot of opinions for you. Take a step back, think about what is helpful, think about who is comfortable with ambiguity, and then start pursuing from those places of interest, curiosity, and growth, instead of getting trapped in what might be kind of rigid rules of creation," she said.

“Risk taking is important because it helps you to develop a resilience, and it helps you to know who you are," she said. "One of the things that I really, really love about the work that I get to do every day is I get to test and iterate. If I have an idea, then I can try it out on a level that can afford me the risk where I'm not betting the farm. If it works, then it's great. Then I can push that a little farther. But if it doesn't work, then I can learn from that and tweak it, and then figure out whether it's something we should continue to do, or whether I should be the one doing it, or whether it would work because someone else gets to do it and it's a better thing for our partner, and not necessarily for myself or the organization."

She also said, “Failures are opportunities to learn. Everything that we do is a learning opportunity. There are numerous things that I have failed at, but one of the biggest things I have ever done is rear four children. The next biggest thing is help to found the organization, No More Empty Pots. What I'm finding is a lot of similarity in both of those tracks of life. They require you to be attentive and focused. They require you to be present. They require self-reflection, and to be self-aware. You have to be okay with who you are, and you have to be okay with what people are telling you so that you accept that as a growth opportunity, but it also helps you to affirm the things that you know that are great about yourself, and being able to accept those things, do as much good as you can with them, and to share that with other people.”