They were unlikely settlers of America’s heartland: children, shipped from New York City orphanages to small towns in the Midwest at the turn of the 20th Century. The small town of Concordia, Kansas is making sure they’re not forgotten.

There’s only one train line left in Concordia, Kansas (population just over 5,000), and it hauls grain. But more than a hundred years ago there were four train lines. Some of them were passenger trains, and in the 1880s, one carried a group of unaccompanied children from New York.

It stopped in nearby Wayne, Kansas, where strangers were waiting to choose the children.

"The kids who were not chosen in Wayne came to the end of the line in Concordia, and then were chosen," says Shaley George, the curator of what is now the National Orphan Train Complex. 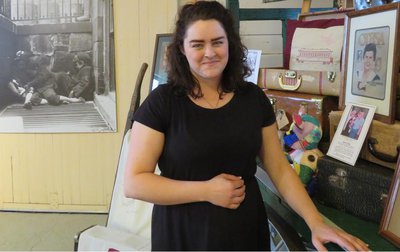 Shaley George, curator of the National Orphan Train Complex, with memorabilia from members of the Orphan Train Heritage Society of America. Behind her is an enlargement of a Jacob Riis photograph of orphans in New York City.

Inside the three-room Union Pacific Depot built in 1917, one waiting room is filled with big black and white photographs (some by the famed tenement photographer Jacob Riis) showing children in New York slums in the 1800s. A social reformer named Charles Loring Brace figured the children, and society, would be better off if they found new homes with families far away from New York City's crime and poverty.

"So he sends the first load of children, 46 of them, to Dowagiac, Michigan, where 36 of them found homes," George explains. "The kids who weren’t chosen went on to Iowa City."

Kids who weren't chosen from the Iowa City train were placed in an orphanage where, George says, the hope was that at least they would age out of the orphanage into a wholesome community that was not New York.

The effort was so successful that more trains followed.

"There would be up to a hundred children on a train, going across the nation, stopping in different communities. A town selects maybe 10, then they get back on the train, and they keep going," George says.

The children came from two big orphanages: the Children’s Aid Society, started by Brace and a group of businessmen; and the New York Foundling Hospital, operated by the Sisters of Charity. Eventually the number of children placed on the trains became more manageable, with perhaps 15 children arriving in a particular community that could take all of them.

Some ended up in bad situations and were abused, George says, but most found good homes, thanks to dedicated placement agents who worked closely with committees of upstanding citizens who made sure kids were placed with good families.

And as the decades passed, these children grew up and had children and then grandchildren of their own.

Jim Garwood, for example, remembers his grandfather, who came on one of the trains in 1911. 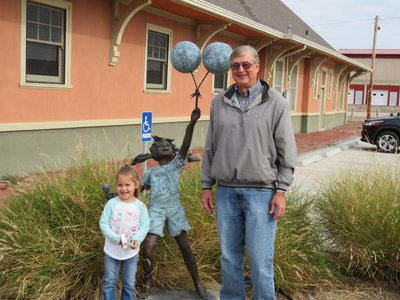 "He was nine years old," says Garwood, who helped out on his grandfather's farm in the summers.

He says his grandfather never really talked about the fact that he'd been on an orphan train, "other than that they went back to New York one summer to try to find his sister. He finally found her and they always kept in touch with each other."

Garwood is a grandfather himself, now, and if his long-ago childhood memories are hazy, his feelings aren't.

"I really admired him and looked up to him," says Garwood, who now lives on his grandfather's farm.

Who are my ancestors?

Other descendants didn’t know their family’s history. In another room of the museum, George points to a glass case, where the faded green ribbon on a baby bonnet is stamped with the number 25.

Marie Cote was an infant on a train headed for Nebraska, but when it stopped in Belleville, Kansas, the Francoeur family of Concordia adopted her. Cote lived to be more than 100 years old, but didn't tell her daughters she was an orphan-train rider until the museum was established. For most of her life, she kept the bonnet locked in a chest.

The fact that the museum exists is a result of longstanding family mysteries.

One day in the 1980s, a woman in Springdale, Arkansas, named Mary Ellen Johnson was working on a local history book.

"One of the stories we got in was a group of children who came out of New York City to Springdale and were given to various and sundry people in the community," Johnson recalls. "I got really interested in that and I found two of them still living that had come on that train in 1912."

Each thought they were the only one.

"I said, 'You all were not on the same train, so there must have been more than one, more than two."

Johnson eventually grew so interested in the phenomenon that she started the Orphan Train Heritage Society of America, which went on to hold reunions all around the country.

"They would just hug and were so tickled to find each other," Johnson says of the attendees. "There was a family feeling amongst them that continued for the next 15-20 years."

She gathered information on thousands of orphans, and published a couple of books. But her own aging mother needed attention, and she couldn’t keep doing all the work herself.

Meanwhile, people in Concordia had discovered their own orphan train connections.

Everyone has a story 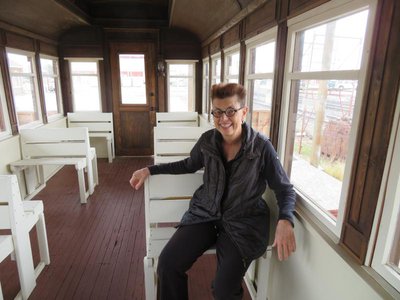 Sue Sutton was English and drama teacher at Cloud County Community College when she invited a visiting lecturer who gave a talk about the orphan-train riders. Members of the audience were fascinated, says Sutton (who is now retired). Soon, she and others began to learn of people in the area with ties to riders.

Also, one of Sutton's colleagues was a member of the family that owned the old Union Pacific depot, which was being used for furniture storage. They got the building on the National Registry of Historic Places and secured grants to restore it. As their ideas progressed, Sutton learned about Mary Ellen Johnson and figured she'd better tell Johnson about their plans.

"She said, ‘You wouldn’t want any of this stuff would you?’"

The "stuff" was all of Johnson's research. So when the museum complex opened in 2006, it included the separate Morgan-Dowell Research Center.

Lori Halfhide volunteers there as a genealogist. She fields as many as 250 requests for information each year.

"It’s not like looking for your ancestor, where you just keeping going back," Halfhide says, "because these kids had name changes, they had location changes. It’s kind of a different ball game."

George says about 4,000 people come to the museum each year (2016 was its biggest year, with 4,700 visitors). A third of those are descendants of orphan-train riders, she says, while others are just folks traveling through North Central Kansas who've seen a billboard and are curious.

"Those folks come in droves," George says. "We've turned into a destination for book clubs."

There are no shortage of creative efforts to tell the story. When she was a drama teacher, Sutton wrote a play called The Chosen and her students traveled to New York where they performed it off-Broadway. And the Texas-based musicians Alison Moore and Phil Lancaster are the museum’s official outreach arm, traveling the country with a show about the orphan trains.

As the few remaining riders near the end of their lives, all of these people are making sure the story of these unlikely American settlers lives on.

Editor's Note: C.J. Janovy is an arts reporter for KCUR 89.3. You can find her on Twitter, @cjjanovy.

This story is part of Artland, a regional public radio collaboration reporting on stories of creativity building community in unexpected places.