A business fighting trafficking in India, and its connection to Creighton University

Millions of women and children are victims of sex trafficking in India, according to U.S. state department estimates. Here is the story of one business that’s trying to help some escape, and its connection to Creighton University in Omaha.

Sarah Lance remembers the look. Pinki’s gaze was raw and vulnerable. The look of a 16-year-old girl fairly new to working in the sex trade. Lance was working for a faith-based organization a decade ago when she met Pinki in the so-called red light district of Kolkata, India, a huge city with a huge sex trafficking industry. 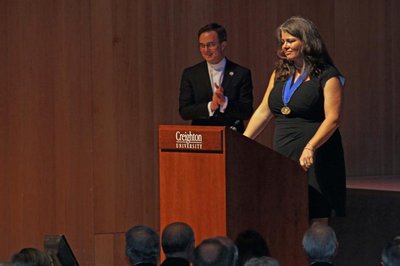 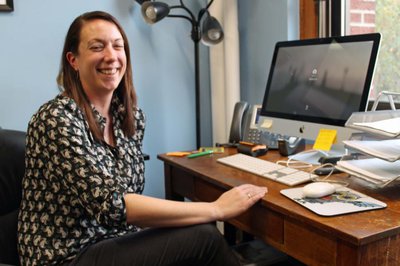 Sarah Lance describes the “red-light district” in Kolkota, India, where one of the Sari Bari facilities is located:

"It the length of a city block, and it's a street that's lined with brothels four and five stories high. The women stand in lines all along this street, which is narrow and rough, and relatively dirty. Women line the streets, so they actually call working in the sex trade, they call it ‘standing the line,’ because they are literally standing in line. Then customers are coming and going.”

NET News has been examining sex trafficking in Nebraska. Here are some of the web/radio stories; more stories and television documentary projects will premiere in early 2017.

As a result of this and other earlier experiences in India, Lance created Sari Bari. It’s a combination for-profit, non-profit business she started with a friend in Kolkata. Sari’s are traditional Indian garments for women; Sari Bari recycles these, turning them into a variety of other products like blankets, bags and pillow covers, then sells these to customers mostly in the United States. The products are handsewn by 120 women who either left the commercial sex trade or are vulnerable to being trafficked, working at facilities that sit on the same streets as the brothels.

“(I) really saw that one of the main needs was an alternative job, needing a different kind of work, because the women (were) trafficked in mainly because of poverty,” Lance said. “We wanted to create something that was empowering. Giving somebody a dignifying job is pretty empowering. These women, while they are vulnerable, they are also capable and smart and really desiring of supporting themselves and caring for their families. (They) weren't looking for a handout. They were looking for a sustainable way to care for their families and for themselves outside of doing sex work.

“It felt very weighty, and I spent a good long time being afraid of failing,” Lance added, talking about launching Sari Bari. “Not for myself, but because of what it would mean for the women. I was highly motivated for this business to succeed.”

Here’s the Creighton connection. It served as the Catholic university partner for this year’s Opus Prize. It is a $1 million award the Opus Prize Foundation gives annually to a “champion of faith-filled change” working on a social issue. It’s connected to the Opus Group, a Minneapolis-based group of construction and real estate development companies.

“The way that their production works is a way that enhances the women to have ownership over the pieces that they're creating and to see themselves as artisans, then ultimately to help them take on leadership roles and managerial roles. Some of the women who've been there the longest own a share in the company,” said Creighton philosophy professor Anne Ozar, one of several faculty and students who spent a week in Kolkota visiting and evaluating Sari Bari.

“The atmosphere is not some sort of factory feeling,” Ozar added. “They intentionally have multiple sites that stay small for the sake of community and support. It was quite delightful within the sites. It's just a lot of women sitting around on the floor working on these blankets. They prefer to work on the floor for reasons that have to do both with culturally they're used to being on the floor and it's easier because of the size of the blankets.”

Ozar said it was difficult, even devastating to hear how women ended up in Kolkata’s sex trade, often lured from rural areas by false promises of good jobs in the city.

“The shame culture is very strong,” Ozar said. “Once they've been forced into that situation, in some cases their families won't take them back, if they found their way back, and it's hard to find your way back. Once you're there, there is a real sense that they are trapped.”

But Ozar said it was also empowering to meet with women working at Sari Bari, and to see the supportive communities they created within the workplace.

A ceremony at the Holland Center was the culmination of a week of Opus Prize events at Creighton and in Omaha. The announcement that Sarah Lance and Sari Bari won the 2016 prize was greeted with enthusiastic applause. “This truly is for the women of Sari Bari, and more importantly for the women who have yet to find freedom. For freedom!” an emotional Lance said in accepting the prize.

Lance said the prize will allow expansion of her company’s brand and let them employ 100 to 150 more women in the next five years. “I think for Sari Bari, it just means that we get to continue to build the dream for more women. We are committed to the long haul in building freedom and opportunity for women.”

The events at Creighton before the award ceremony also helped spread the word about international trafficking to new audience.

For Sarah Lance it was an exciting return to Omaha; she lived here for a couple years before starting Sari Bari. She doesn’t know what happened to Pinki, but hopes the 16-year-old girl she met a decade ago found a way out of trafficking. And Lance hopes her efforts will help others in India live a better life.