300 Individuals, 60 Majors, and Only One Cornhusker Marching Band 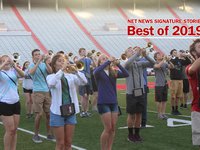 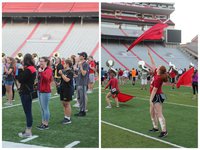 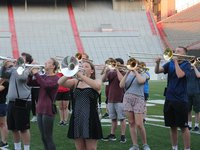 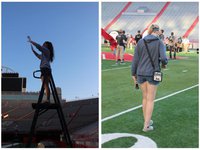 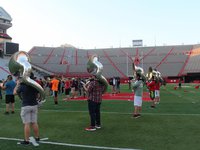 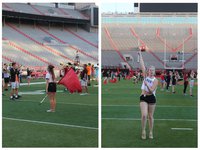 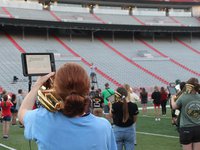 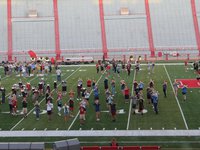 Every Nebraska Cornhuskers football game is special. And at every game, the cornhusker marching band is there to put on a show.

It started with a slow migration.

Trumpet players rode bikes with one hand while holding their cases in the other. Saxophonists carried their instruments slung across their backs as they trek across the UNL campus. While the sun was barely up, the band was gathering.

The drumline was already hard at work, as were the marimba and timpani players of the front ensemble, which stays stationary at the front of the show. The color guard warmed up outside Memorial Stadium, bright red silks twirling in the cool breeze of an early September morning.

The band’s director, Tony Falcone, led warm-ups from high-up on a drum-major stand.

“The logistics of gameday start way before gameday and there’s our part of it, we’re learning our pre-game and our halftime routines, the things that we’re doing in the stands," Falcone said. "But then that all coordinates with everything else that’s happening in the stadium.”

The band has to fit their cheers and stand-tunes in with the game, with advertisers, and with TV commercial breaks.

“The drum majors are on a headset with everyone else that’s part of that, and so they get directly, ‘play now, and you have this amount of time,’" Falcone said. "And they’ll get warning, ‘it’s coming up, you’ll have 45 seconds at the end of this.’”

Eventually warm-ups gave way to music. Falcone arranges the songs for the band’s shows, all seven of them this season.

“I wrote the first two shows before school started, and I’m working on the rest of them as we go,” Falcone said.

The color guard of the Cornhusker Marching Band warms up before practice. (Photo by Allison Mollenkamp, NET News)

New music each game means new visuals too. Doug Bush is assistant director of the band, and writes the drill, which tells each band member where to stand and how to move to the next formation.

“The opening set of this show spells ‘grit and glory.’" Bush said. "We try to do what we can to communicate to a person all the way in the top of the stadium what we’re attempting to represent.”

Bush spent rehearsal up in the stands, where he had a better view of the band as a whole.

Bush would have liked to look for precision, but this show was still in the early stages of rehearsal. Students start by learning the music and drill separately.

“And then start putting those two things together," Bush said. "So we’re kind of at that stage right now where they’re still trying to remember exactly what the sequence of events is. ‘I do this while I play this music,” or, ‘I do this while the drumline plays this music,’ where we’re working on the dance right now.”

Yes, there is dancing in band. Though you could tell some members were more enthusiastic about it than others.

The Cornhusker Marching Band has 300 members, all of whom went through an audition process starting in the spring.

Trumpet player and environmental restoration science major Katie Pace is in her second year with the band. She got interested in the Cornhusker Band in high school.

“Senior year I did trumpet day here, and I was kind of dead-set on going to a different college, but my band director was like, ‘yeah, try this out, you’ll have a lot of fun,’ and I did," Pace said. "So I completely changed. I was like, ‘I’m going to UNL, I’m gonna audition for the marching band,’ and then I did. And now I get to do this, so it’s the best.”

Pace sat on the sideline as rehearsal continued for a show she won’t be marching in. She pulled out the iPad all members carry on a strap.

“So this is how we get our drill," Pace said. "We go on the app, and then we select who we are. I’m Trumpet 32. And so we can see our drill. So I am this dot and it shows me where I came from, and then you can see where you are, so it’s really cool.”

The drill app helps making learning seven shows a year a little easier. Band still takes up a lot of time, though. Practice starts at seven in the morning every weekday, except on Tuesdays when it starts half an hour earlier. On the days of home games, the band starts practice five and a half hours before kick-off.

“The vast majority of them are not music students. They’re majors from all over the university," Falcone said. "There’s over sixty majors represented in the group and so they’re all high-achieving scholars and they take of their time to dedicate to the school to do what they do.”

Seeing all those majors, all those different experiences being brought to the field each week, means Falcone sees the band differently than other people.

“There’s a tendency of people to think of them as this one thing, because you see them all, they’re dressed alike at the game, so you think of the band as a thing, and the band is a thing," Falcone said. "But it’s also made up of three hundred individual people that have their own stories and their own lives and their own academic selves outside of the band, and so I think that’s important for people to remember.”

Week after week, those 300 individuals gather with two directors, three graduate assistants, office staff, and instructors for percussion and color guard, and work to put together a show.

Those leaders bring their own experience as band students to the table. Bush, for instance, played the trumpet when he first started band in 1973.

“I don’t know that I’m harder on trumpets. I try to expect the same out of everybody, and then realize that they’re all individuals," Bush said. "Today, this person may not be able to give me the same that this person next to them can give me.”

Even on their hardest days, these 300 people come together. Trumpet player Katie Pace says it feels like family.

“Chances are not everyone knows everyone’s name, but we feel like we’re best friends regardless, so it’s just like a really big community," Pace said. "So everyone feels welcome, like one big family. One big family reunion. You may not know everyone, but you know everyone.”

Editor's note: This story is part of our "Best of 2019" Signature Story report. The story originally aired and was published in September.