The Nebraska Legislature wrapped up its 2020 session last week – a session that, like Nebraskans’ lives – was upended by the coronavirus pandemic. Senators passed major legislation, but left some big issues hanging.

Addressing members of the Legislature on the last day of its session last week, Gov. Pete Ricketts struck a positive note.

“You are to be commended for the hard work that you’ve put in during the most trying and difficult of circumstances, and for remaining focused on the priorities of the people of Nebraska ,” Ricketts said.

But in some people’s view, the session was equally characterized by what didn’t get done. Sen. Patty Pansing Brooks said some good was accomplished, but she’s frustrated.

“I believe we should have done more on childcare, on paid leave, eviction assistance, assistance for unemployed people. We still have no idea what the economic fallout is ultimately going to be on COVID. We’re clearly not out of the woods; we’re not out of our masks,” Pansing Brooks said.

Those weeks saw action on one the biggest issues of the session: property taxes. Early on, lawmakers considered a plan to increase state aid to schools, while further limiting schools’ ability to use property taxes. Sen. Lou Ann Linehan described the idea during debate in February.

“What we’re trying to do here, over a four-year period, is say ‘You need to slow your growth of spending,’ Linehan said.

But that proved a non-starter for schools, worried the Legislature would cut state aid if tax revenues declined. So lawmakers hatched a new plan for an income tax credit to offset part of what property owners pay in taxes for schools. Ricketts hailed that in his end-of-session speech.

In 2014, that property tax relief fund contained $140 million. It now stands at $275 million. But at the same time, total property taxes levied rose more than $800 million. That led some, like Sen. Steve Erdman, to predict this year’s legislation, LB1107, won’t do enough. “(LB)1107 is not property tax relief. Relief means that I pay less taxes next year than I paid this year…This is a decrease in the increase,” Erdman said.

Others, like Sen. Machaela Cavanaugh, said the bill diverts revenue that will be needed for more important purposes, like schools. Cavanaugh estimated she would save $150 in property taxes.

“I would be devastated if our public education suffers so that I can have $150 more,” Cavanaugh said. 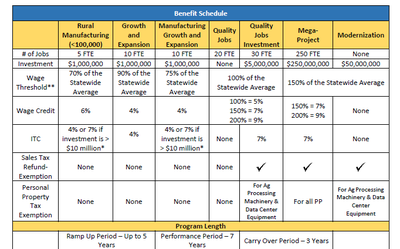 Summary of new corporate tax incentives from the office of Sen. Mark Kolterman.

The bill also updates Nebraska’s corporate tax incentives, raising wages companies must pay from the current $13.35 an hour to $16.10 in counties with fewer than 100,000 people, and $17.25 elsewhere. They would also have to offer health benefits, although critics point out that below about $17 an hour, a family of four with one income would still qualify for Medicaid.

The bill also promises $300 million within five years for a center at the University of Nebraska Medical Center in Omaha to deal with radiological, biological and chemical threats. The money is contingent on federal appropriations of at least $1 billion dollars and private contributions of $300 million.

Another proposal receiving lots of attention was a bill restricting a second trimester abortion procedure, known medically as dilation and evacuation, or D & E. Opponents call it “dismemberment” abortion. The bill passed, but a legal challenge is expected.

While there was controversy over major proposals, senators passed a lot of other legislation, as Speaker Jim Scheer noted on the last day of the session.

“We’ve accomplished a lot in this session, whether we realize it or not. A total of 285 bills were passed into law this session,” Scheer said.

They included reforming the state’s Youth Rehabilitation and Treatment Centers, creating a commission on African American affairs, requiring anti-bias training for law enforcement, and allowing college athletes to profit from the use of their name, image or likeness.

Other measures passed to have advocates present during sexual assault investigations and require colleges to report on sexual harassment.

But they also didn’t act on a wide range proposals, from independent police oversight boards to mandating COVID-19 protections for meatpacking workers. That has critics already calling for senators to reconvene in special session later this year.

If that doesn’t happen, lawmakers will have plenty on their plate, on these and other issues, when they reconvene in January.