The sketch artist for the Omaha Police Department got it right.

In August 1979, witnesses saw passengers get into two different cabs before the driver’s bodies were found.

Reuel Van Ness, Jr. was shot in the head by his rider.

A week after the search for suspects began police arrested Carey Dean Moore. He did the shooting. His teenaged brother Don was charged with second-degree murder. 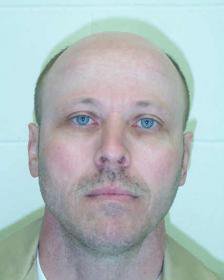 Summary: In August 1979 Moore, aged 22, robbed and killed two Omaha cab drivers within a week. The crimes had been planned in advance. Moore waived trial by jury and was convicted by the judge following a bench trial. His 14-year-old brother Don was convicted of second-degree murder. He was paroled in 2008.

From the first appeal before the Supreme Court Nebraska v. Moore, 1982:

“The defendant (Moore) did not introduce any evidence during the trial of the case. Therefore, there is no significant conflict on the issue of guilt. The defendant confessed commission of the two killings in taped interrogations by the police, which were introduced in evidence. It is not claimed that these confessions were involuntary.”

Notable: Chief Justice Norman Krivosha and Judge John F. White concurred with the majority in upholding Moore’s conviction, but dissented from the section imposing the death penalty. The pair would have sentenced Moore to life without parole.

Family ties: When he was 27, Moore attempted to escape from the penitentiary’s death row by trading clothes with his twin brother David Moore who was also jailed at the penitentiary. They were caught. "Back then we were both animals," David Moore said during a recent interview with the Associated Press. "We weren't fit to be allowed in society, I guess."

Bill Kelly, NET News: 1979. It's summer, late August. There are a couple of crimes that have Omaha very upset and are making the paper. What happened in that August?

Kelly: Was it a sensational crime?

Fogarty: It was not. It did not take the city by storm. People were not locking the doors and watching the kids, or anything like that. After all, the victims were both cab drivers, so it wasn't the guy next door, it was somebody very specific.

Kelly: Briefly, what were the circumstances of this crime? What happened over the course of a week?

Fogarty: Well, it was abundantly clear it was somebody who wanted to make money from cab drivers who carried cash, but also killed them because undoubtedly they had seen his face and maybe even knew who he was. Police had evidence galore right at the beginning, and then it turns out that Carey Dean Moore had actually rehearsed the thing. He had made phony calls over a period of a few weeks, just to see what cab drivers would show up and what their habits were, and this sort of thing.

Kelly: The first time you see Moore in court, do you have an impression of this guy?

Fogarty: He looked so young. When he went to trial, I believe he was 22. But he was so young. I talked to the detectives on the case, and I talked to the prosecutors, and one theme started to come out, and that was that Carey Dean Moore had been sort of the product of the juvenile justice system then, not now. And that's the juvenile justice system that was designed for stealing hubcaps, breaking windows, just being a jerk. It was not designed to handle people who are deeply into felony crime.

One of the messages that the people who dealt with Carey Dean Moore got was he seemed to be floored and flabbergasted. "I mean, I've done all kinds of things like this before. What was the big deal in killing two cab drivers?"

Kelly: He did not see it as a big deal?

Kelly: Let's talk about the trial a little bit then. You had covered other trials. Was there anything that was distinctive or different about the proceedings in the courtroom?

Fogarty: The aggravating circumstances tended to focus on the degree of premeditation of this case. He rehearsed it. He thought about it. He planned it. There was some evidence that he almost took joy in it. Moore came home, by his own confession, and got his younger brother to come to the scene of one of the murders, so that Carey Dean Moore could show his brother what he had done. There was almost a triumphant reaction to the thing, which was very strange.

Kelly: They had the tapes of their confession that the Omaha police detective got. That day in the courtroom, what was that like to hear that confession?

Fogarty: It was very eerie to hear the amazing amount of detail pouring from that tape recording. Detective Jack O'Donnell played them in court in front of Judge Clark, but it was very eerie hearing the matter-of-fact delivery, a passionless delivery. He wasn't angry. He wasn't happy. Statements such as this: Carey Dean Moore saying, "The second he looked back towards me, that's when I pulled the trigger, aiming at his head three times, I think. He slumped down. I got out and pushed him over. I didn't want to look at his face."

Kelly: With what kind of emotion?

Fogarty: But that was delivered without emotion. Very businesslike delivery of all of the details.

Kelly: What was the effect on the rest of the audience in the courtroom?

Fogarty: It was hushed. It was a very, very important moment. As I recall, (Moore’s) defense lawyer was Larry Corrigan, who later became a very good judge himself. That was his case going away, if he ever had one.

Kelly: The judge only takes a weekend to go over the evidence and give it consideration. He comes back the next Monday with the guilty verdict. Mood in the courtroom at that point?

Fogarty: Nobody expected anything else.

Fogarty: He certainly didn't look surprised. He had left a trail of come and find me evidence all over the area.

Kelly: Under Nebraska law, and from what you heard in court, what ends up making this a death penalty case?

Fogarty: The degree of premeditation. He thought about it, he practiced it, he did it without reservation, without hesitation. I have seen much more heinous, atrocious crimes that did not get the death penalty in Nebraska. It was not the usual kind of case for a death penalty from what I've seen.

Kelly: 38 years after you were sitting in that courtroom, can you imagine that it was going to take this long?